Lisbeth Larsson was a professor of literature and an innovative researcher. She also took the initiative to Svenskt kvinnobiografiskt lexicon, (SKBL).

Lisbeth Helena Larsson was born in 1949 in Vara. Her parents were Karin, a school canteen assistant, and Knut Wilhelm Larsson, a bicycle shop owner. Her sister Carina, three years her senior, was very important to her all her life. Their father was an invalid who died suddenly in 1964. Their mother remained in Vara until her death in 2003. Both daughters moved away to continue their educations and start their own families. Lisbeth Larsson’s only child, Martin, was born during her brief marriage with Börje Persson in the early 1980s. After their divorce, she married Jan Henning Pettersson, a marriage that lasted for the rest of her life.

Lisbeth Larsson matriculated in Skara in 1968 after which she studied at the universities of Gothenburg and later Lund. She qualified first as an upper secondary school teacher of religion and Swedish, and then continued on to postgraduate literary studies. She became an important member of intellectual circles in Lund, and she promoted feminist issues in perpetually ongoing discussions with colleagues and friends. Among others in her social circle were Håkan Arvidsson, Eva Haettner Aurelius and Eva Österberg.

Lisbeth Larsson took her doctorate in 1989. Her innovative thesis En annan historia: om kvinnors läsning och svensk veckopress came out in two editions. In it, she confronts the contempt shown by academic literary studies towards weekly magazines and their women readers. In her thesis, Lisbeth Larsson highlights a theme that in various ways became a leitmotif in her research, that is, the needs of human beings for stories. In her book, she allows two types of reading, or if one so will, two discourses, to meet: the one scientific and the other identificatory. In that way she created a new and germinal way of writing, while at the same time uniting common sense with feeling in her analysis. The thesis initiated a positive re-evaluation of popular culture as well as of female authorship, and her followers in this field have been many.

At an early stage in her research career, Lisbeth Larsson realised that research on women’s reading and writing and on their history and conditions has other preconditions than the equivalent research on men. Women’s diaries and other autobiographical materials have seldom been systematically preserved and indexed in archives. The sources for such research are thus particularly difficult to access. In this sense, Lisbeth Larsson has been an activist. The bibliography Kvinnors självbiografier och dagböcker i Sverige: Bibliografisk förteckning 1650-1989, a collaboration with her literary studies colleagues Eva Haettner Aurelius and Christina Sjöblad in 1991, constituted a significant contribution. The book contains a chronological account of women’s own life documentation and where it is to be found. A similar thought, that women’s writings are easily forgotten and hidden and for that very reason need to be brought back into sight, lies behind the work Nordisk kvinnolitteraturhistoria, behind which Lisbeth Larsson was a driving force. The aim was to collect, structure and preserve for the future, which was also the aim behind the book Kvinnopolitiska nyckeltexter that she published in collaboration with the sociologist Johanna Esseveld in 1996.

In 2000, Lisbeth Larsson was made professor of literary studies with a special focus on gender studies at the University of Gothenburg. There she created a lively gender research environment and supervised many postgraduates. She simultaneously held several positions of trust in the research context, among others as a board member of the Swedish Research Council for several years. Her acuity and courageous standing up for core components led to her being appointed to represent the teaching faculty on the University board. In connection with her appointment in Gothenburg, she developed cooperation with KvinnSam at the Arts Faculty Library. This section started in the 1950s as an archive of women’s history. Lisbeth Larsson considered that the archive should be developed, digitally by preference, as an archive of women’s history that was accessible to all. This was a matter of equality. Along with the Director at the time, Inger Eriksson, Lisbeth Larsson therefore approached the then-Minister for Gender Equality, Nyamko Sabuni, to press for state funding. The Minister was interested and perhaps also impressed but no funding resulted. Lisbeth Larsson did not however give up the idea of a digital encyclopaedia of women’s history. She applied to other institutions for funding but gender equality was clearly not a weighty enough cause. Funding was however granted for a smaller project on significant women in the history of Gothenburg. This resulted in the book Hundrade och en Göteborgskvinnor. The work on this book constituted an important preparation for the more extensive research funding awarded by the Bank of Sweden Tercentenary Foundation for Svenskt kvinnobiografiskt lexikon (SKBL), launched on 8 March 2018.

Lisbeth Larsson’s tenacity in retaining her grip on the idea of a digital archive of women’s history underlines her unwillingness to give up anything in which she believed. In that respect, she was not only an idealist and activist but also a realistic strategist. Gender equality would never have attracted funding but research was a good argument since it required a documented and structured infrastructure. The digitally published, searchable SKBL lexicon/database takes up not only women authors but also some of the women, from the middle ages to the present, who have been significant for the whole of humanity through their deeds. When the second stage of the project was completed in the summer of 2021, more than 2,000 biographical articles were included, written by authorities on each subject, and of which Lisbeth Larsson herself had written about fifty. Apart from the biographies, the database contains structured biographical data that is now accessible to research. Since the material also exists in English translation, non-Swedes can also access it. Lisbeth Larsson included a number of articles in a printed book: Märkvärdiga svenska kvinnor: 200 kvinnor som förändrat våra liv. In it, she created a synthesis of Swedish women’s history from the middle ages until the present.

In her work of bringing research infrastructures into being in various ways, Lisbeth Larsson cooperated with colleagues from different disciplines. This did not prevent her from simultaneously working on her own research projects, not seldom in polemics with older research traditions in the subject. In her book Sanning och konsekvens: Marika Stiernstedt, Ludvig Nordström och de biografiska berättelserna from 2001 she focuses on an author couple of whom, in the classical manner, the male author’s writings have been highlighted at the cost of the female writer’s. In this study, she discusses biography as a genre, in a deep and theoretically innovative way, with its history and role in the human struggle concerning narratives. Among other things, Lisbeth Larsson points out that “[b]iography is a genre with a moral to it. It is normative and didactic in its character.” This conclusion explains her interest in the metanarratives of research, which she later puts to use in an analysis of narratives about Victoria Benedictsson: Hennes döda kropp: Om Victoria Benedictssons arkiv och författarskap. This book came out in 2008, published by her friend Svante Weyler’s publishing house. It was nominated for the Augustpriset, a major Swedish literature prize. In this study, the view of Victoria Benedictsson’s authorship is revised, as is – not least – the author Axel Lundegård’s adaptation of material left behind by Victoria Benedictsson.

Parallel to her research and many honorary offices, Lisbeth Larsson was a much appreciated theatre and literature critic in the daily press. Her cultural journalism started in 1980 when she became a literature critic for the local daily Göteborgs-Tidningen. In 1984—1999, she was a theatre and literature critic for the evening tabloid Expressen, the editor in chief of which was Bo Strömstedt who came to mean a lot to her on a personal level. During these years, she developed her capacity for quickly delivering texts; a theatre performance required a review the next morning at the latest. In 2003—2009 she wrote regular articles on literature in Dagens Nyheter and thereafter in Göteborgs-Posten.

Lisbeth Larsson was always a writing and reflecting person. Her university work also involved teaching students, which she had done since the 1970s. In collaboration with colleagues from art studies and history, she developed the course Life-writing: biographical genres in transformation, which combined teaching students and public seminars that were very popular. In that way she wanted to make the university’s activities a concern for the whole community. This was not an adaptation to university policy but just a matter of honest work ethics: an institution that lived off public money should also contribute something in return.

After her retirement from the University of Gothenburg, Lisbeth Larsson and her husband Jan left their house on Vrångö, an island in the Gothenburg southern archipelago. They wanted to live near their grandchildren in Lund and resume contact with old friends there. They also acquired a house in Skillinge. A free life of writing without university duties was the vision, but fate decided otherwise.

The latter years of Lisbeth Larsson’s life were darkened by illness. The cancer diagnosis was a harsh blow that nevertheless did not stop her from arranging her own funeral and responsibly providing for her loved ones. The last period also involved retrospection and evaluation. Her successful life had been stimulating but also brought with it certain omissions that it was now too late to rectify. Her academic work had been enjoyable, but at too great a cost, was how Lisbeth Larsson summed up her life two weeks before her death.

Lisbeth Larsson died on 16 October 2021 in Skillinge. She has her final resting place in Lund. 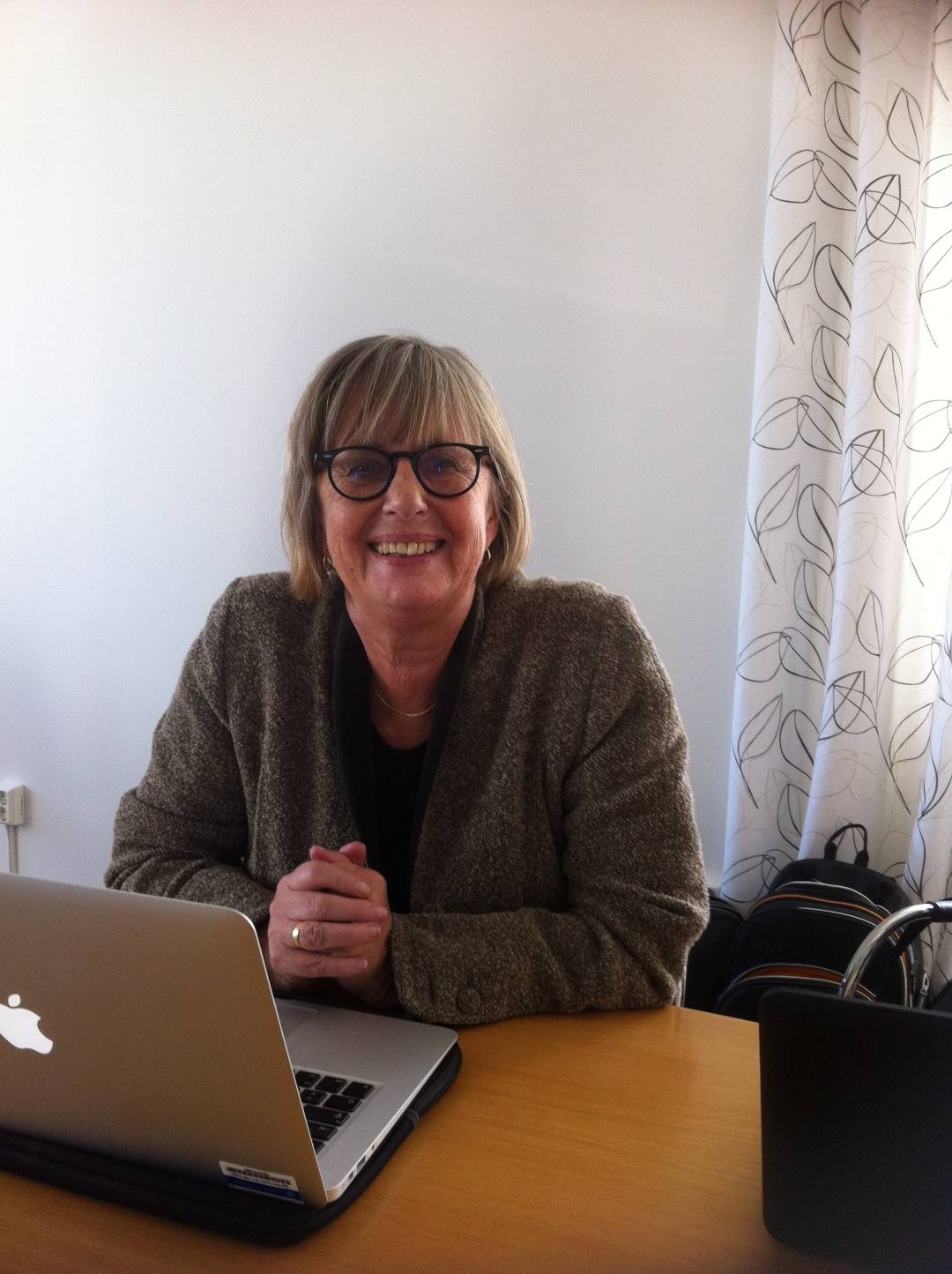