Lina Jonn was a successful photographer from Lund. During a short period in the 1890s she established a trademark which lasted for decades after her death.

Lina Jonn was born in Stora Råby, just outside of Lund, in 1861. She was the second-youngest in a family of seven siblings. Her parents, Jöns Johnsson and Hanna Johnsson (née Pålsdotter) were tenant farmers. From the family’s comprehensive correspondence we have evidence of how closely connected the family members were and that this connection continued into adulthood. Lina Jonn’s father stopped working the land in 1875 and instead began running a grist mill in Lund where it was intended that the whole family would move. However, Jöns Johnsson died suddenly of blood poisoning in July that same year. The mill enterprise was sold and the rest of the family moved into Lund town. Lina Jonn and her sisters then fell under their older brother Jonas Johnsson’s guardianship.

Lina Jonn’s longing for personal freedom seems to have emerged at an early age, coupled with her thirst for knowledge and experiencing new things. She was interested, from an early point, in finding artistic ways to express herself and so she drew and painted, as several of her sisters also did. When she was 16 she began to work as a governess at a farm near Höör, remaining there for around a year. She then undertook private language studies in Lund, studying German and French as well as basic English.

In 1879, having been given a lead by her sister Anna Jonn (who had in turn received it from her employer), Lina Jonn travelled to Switzerland to attend a girls’ finishing school in Neuchâtel where she continued her language studies. Her letters home reveal that each week she spent two days studying German, followed by two days doing French and finally another two learning English. The following year she travelled to Great Britain. There she began to work as a music, language, and drawing instructor at a finishing school for girls in Leicester, where she taught for a little over a year. She then returned to Sweden and took a position as governess at Mälby ironworks in Gnesta. After a few years Lina Jonn wanted to broaden her horizons and make a greater contribution to society and thought that training as a physical education instructor would be a way forward. She applied to attend Gymnastiska Centralinstitutet (now the Swedish school of Sport and Health Sciences) in Stockholm in 1884. However her application was rejected following the discovery, during her medical examination, that she suffered from scoliosis.

Downhearted at this rejection Lina Jonn struggled to find a clear path forward for her future. She went on several trips to Europe, she attended a painting course in Switzerland and studied German in Hannover. In 1886 she returned to Lund in order to begin working as a private language teacher. At this time her brother, Pål Johnsson, suggested that she should try her hand at professional photography and apply to be an apprentice with her brother’s friend, the photographer Per Alexiz Brandt in Helsingborg. Shortly afterwards Lina Jonn began to work at Brandt’s photography studio. She brought her sisters Hanna Jonn and Maria Jonn along with her and they also helped out in the studio. Lina Jonn learned the photographer’s trade and took great interest in new techniques. For example, in 1889 she visited Stockholm in order to learn how to use flash photography.

In 1890 a company named Alexiz Brandt & Co. was registered – the “Co.” referred to Lina Jonn. She and Alexiz Brandt were now business partners and successfully ran the company together. However, Lina Jonn increasingly considered either opening her own studio or perhaps a sister branch to the Brandt office in Lund. On 10 October 1891 the Helsingborg Dagblad newspaper announced that the business relationship between Alexiz Brandt and Lina Jonn had ended and a few weeks later one could read in the Lunds Weckoblad newspaper “that Miss Carolina Johnsson opened a photographic studio under the name of ‘Lina Jonn’.” With the support of her sisters she had finally taken the step of establishing her own business.

The actual photography studio, situated at Bantorget 6, was one she had taken over from another photographer named Lorentz Nilsson. Lina Jonn rapidly made a name for herself as an accomplished studio photographer. She made careful use of photographic techniques and the manual aspects of the trade, documenting her experiments in seeking to improve her images, all of which is preserved in her notes. She wrote about developing, making copies, the best studio lighting and how to engage with photographic models in order to get the best pictures.

Lina Jonn had several employees in her studio in addition to her sisters, who would lend a hand as and when it was needed. Several later better-known Lund photographers began their careers in Lina Jonn’s studio, including Per Bagge and Albert W Rahm, the latter of whom became a photographer to the Swedish royal court. Most of the pictures taken at Lina Jonn’s studio were portraits of Lund’s citizenry and people connected to the university, but also common Lund folk and travellers who simply wanted to memorialise their visit to Lund. Lina Jonn established her studio, Fotografisk Atelier Lina Jonn, just as portrait photography was becoming more generally accessible resulting in an increased demand for pictures. Lina Jonn did not settle, however, for just producing portrait photographs but she also carried her bulky photographic equipment outside the studio. She documented civic festivities in Lund, student celebrations, women at work, and she studied the expanding town as well as the negative side of urbanisation, namely the slums and accompanying poverty.

Lina Jonn was a member of Lunds fotografiska förening (photographic association) in which she was the sole professional photographer. The other association members were amateurs and primarily belonged to the top echelon of Lund society. Membership in the association presumably served as a way for Lina Jonn to network and increase her customer base for her business.

The image that made Lina Jonn nationally famous was taken in the summer of 1893. On 27 May 1893 King Oscar II visited Lund to receive his honorary degree from Lund university. Lina Jonn was called to Biskopsgården in order to take a portrait photograph of the king, adorned with a crown of laurel leaves and a small bunch of Lilies of the Valley pinned to his lapel. The picture Lina Jonn took was considered to be such a good portrait that newspapers throughout Sweden reported on it and Lunds Weckoblad called her “our newest royal court photographer”. King Oscar II then received an album from Kulturhistoriska föreningen in Lund which contained 11 artistic photographs themed around Lund’s Kulturhistoriska museum, all taken by Lina Jonn. This was also reported in the press, serving to confirm her reputation as a talented photographer. The image of King Oscar II became very popular and was used in various contexts, such as in the 1894 Norna: svensk kalender to which many well-known authors, including Selma Lagerlöf, contributed pieces of text.

During the ensuing years Lina Jonn participated in several exhibitions and photographic competitions in which she did well. In 1894 she submitted pictures to the photographic exhibition at Industripalatset in Stockholm, displaying portraits of children and pets as well as an image called Månsken vid hafvet. She won certificates and a bronze medal for her photographs and this was publicised in several newspapers throughout the country. The following year she submitted an image of a mother and child to the 100th edition of Fotografisk tidskrift: för fackmän och amatörer published in February 1895. That same year she exhibited her work at Lund industrial exhibition, winning first prize in the “Graphic work” category. In July 1896 she won a silver medal and prize at Malmö Industri- och slöjdutsällning (industrial and handicrafts exhibition). In December that same year she once again was a prize-winner, when her submission of a collection of children’s portraits was awarded the Idun journal’s photography competition top prize. The pictures were subsequently published in the journal’s extra large Christmas edition.

Around this time of major success Lina Jonn handed over responsibility for the photography business to her sister Maria Jonn. Lina Jonn had moved to Norway in the spring of 1896 having found love there. Three years earlier, in the summer of 1893, Lina Jonn and another sister, Erika Jonn, had travelled to Norway during which time they stayed at a summer boarding house in Hönefoss run by a farmer named Gudbrand Ole Tandberg. Lina Jonn fell instantly in love with the man and on her return to Lund she entered into a long correspondence with him, which eventually led to the couple marrying on 9 December 1895 in Nordenhov church in Norway.

The couple settled at Tandberg’s farm in Hönefoss. The Eslöfs tidning newspaper of 17 December 1895 carried an announcement of the wedding. Their son John was born barely a year later on 1 November 1896. A few weeks after the birth Lina Jonn died due to heart failure. The boy was then brought to Lund where he was brought up by his maternal aunts Maria, Hanna, and Erika. Lina Jonn’s photographic enterprise and the Lina Jonn trademark continued for several decades after her death, used not only by her sisters but also by other photographers – the name of Lina Jonn was an established mark of quality indicating good photography. 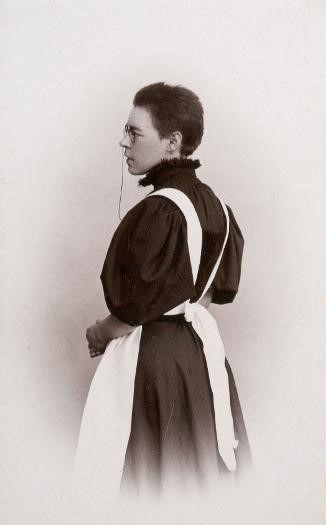