Kristina of Holstein-Gottorp was a German and Swedish duchess, queen and dowager queen. She was the second wife of King Karl IX of Sweden.

Kristina of Holstein-Gottorp’s early years in Sweden coincided with the ongoing struggle for the Swedish throne between her husband and his nephew, King Sigismund of Poland. During this turbulent time the following children were born to the royal couple: Kristina, 1593, Gustav II Adolf, 1594, Maria Elisabet, 1596, and Karl Filip, 1601. In addition, Karl IX already had a daughter, Katarina, 1589, from his first marriage.

The new Swedish royal family faced suspicions regarding their legitimacy given the continued claims to the Swedish Crown advanced by the Polish branch of the Vasa. The Norrköping parliament held in 1604 determined that Karl IX’s male successors would become the official heirs to the Swedish Crown. Karl IX added an extra layer of legitimacy to his branch of the Vasa family by also awarding his female heirs the right of succession. In fact, thanks to the Norrköping succession laws, Karl IX’s granddaughter later became Queen Kristina, ruler of Sweden, on the death of her father, Gustav II Adolf in 1632.

King Karl IX decided that, after his death, his queen, “our beloved royal wife and dear mother of our royal son”, should lead the minority government, along with Duke Johan of Östergötland, on behalf of the eldest prince, Gustaf Adolf. She was also to step in as guardian of their younger son, Karl Filip, and take responsibility for their daughters’ educations and future marriages. Kristina of Holstein-Gottorp had previously served as regent when Karl IX was away on military campaigns in the Baltic. Towards the end of his life Karl IX began to suffer from a succession of strokes and Kristina of Holstein-Gottorp saw to it that the family’s interests were protected ahead of the accession of his successor.

At the time of Karl IX’s death, in October 1611, Sweden was in a vulnerable position: not only was the kingdom engaged in wars on several fronts but the economy was more or less in freefall. Kristina of Holstein-Gottorp, now dowager queen, considered it best if her seventeen-year-old son, Gustav Adolf, fully assumed the reins of power instead of being hampered within a minority government. In December that year she summoned parliament and her son was prematurely declared to be in his majority, albeit Kristina of Holstein-Gottorp retained the right to be involved in legal and foreign policy matters and she promised the Swedish Estates of the Realm that she would continue to support the king with maternal advice.

Whilst King Gustav II Adolf was away on military campaigns the now dowager queen Kristina of Holstein-Gottorp ran the kingdom. She sourced new funds and soldiers to cover the wars in which Sweden was involved. The extent of the burden placed on the relatively poor Swedish population by the Crown’s demands for conscripts and extra taxations is revealed in the many petitions the dowager queen received.

As legal guardian of her youngest son, Karl Filip, Kristina of Holstein-Gottorp was also in charge of his ducal land. This included Södermanland, Närke and Värmland and comprised a significant powerbase in its own right. Unlike the rest of the Swedish kingdom it benefited from being in good financial standing thanks to its exports of grains, iron, and weapons. The dowager queen, who not only skilfully ran the duchy and its resources, became an important money-lender to and financier of the Swedish Crown during the 1610s. When King Gustav II Adolf sought to reinforce his royal power at the duchy’s expense she fought for the duchy’s right to retain its independence from the Crown.

Kristina of Holstein-Gottorp was also heavily involved in her children’s marriage negotiations. To her mind marital alliances with other princely families should strengthen her own family’s standing and legitimacy. During Karl IX’s lifetime various suitors had been proposed for the eldest daughter, Katarina, although nothing had come of these partly due to the Swedish royal family’s uncertain standing. Things improved following the signing of the Knäred peace treaty between Sweden and Denmark in 1613. The dowager queen then began lobbying for her daughter to marry the Elector Palatine Johan Casimir of Zweibrücken, who had good political connections although he lacked solid finances. The Chancellor of the Realm, Axel Oxenstierna, considered this match unfavourable due to the negative economic situation, but Kristina of Holstein-Gottorp was nevertheless successful in achieving the marriage, which took place in the summer of 1615.

By that time the youngest daughter, Maria Elisabet, was already married – a union also organised by her mother – to Johan of Östergötland, son of the late King Johan III and Gunilla Bielke. Johan had renounced his claim to the Swedish throne but the fear had remained that he might marry a foreign princess and seek to strengthen his position vis-à-vis the Crown. The Clergy had opposed this marriage between cousins as it contravened the word of God and they were also irritated at not having been approached for advice in the matter. Kristina of Holstein-Gottorp, well aware of the Reformers’ view of these matters, took up the discussion with the Clergy and subsequently the marriage of Maria Elisabet and Johan went ahead in 1612. This union was, however, a very unhappy one as both husband and wife were psychologically unwell and their ill health only worsened during their marriage. The couple died, a few months apart, in 1618: Maria Elisabet died aged 22 and her husband Johan died aged 29. Kristina subsequently regretted having forced her daughter into the marriage and believed that the Clergy ought to have prevented it from taking place.

The dowager queen also had her way when it came to King Gustav II Adolf’s marriage. She felt he should marry a German Protestant princess in order to strengthen ties between the Swedish kingdom and the Protestant princes in Germany. She thus sought to end romantic relations between her son and Ebba Brahe, believing such a pairing would only generate jealousy and unhappiness amongst other members of the Swedish aristocracy and engender political tensions. A foreign princess, however, would introduce noble ancestry and blood into the royal family and form natural separation from the aristocracy. Although the king, and his courtiers, sought in vain to persuade Kristina of Holstein-Gottorp to accept his romance with Ebba Brahe the relationship finally ended in 1615 when she moved to live at the court of her relative, the former dowager queen Katarina.

Kristina of Holstein-Gottorp, who had previously approached her contacts in search of a suitable match for her son, now encouraged Gustav II Adolf to pursue marriage negotiations with Maria Eleonora of Brandenburg. The dowager queen was in touch with the intended bride’s mother, Anna of Prussia, and in November 1620 Maria Eleonora became Queen of Sweden.

Despite increasing health troubles, Kristina of Holstein-Gottorp continued to play a prominent role in Sweden during her twilight years, largely thanks to her financial prudence and her network of contacts. She died at her jointure of Nyköpingshus in December 1625.

Kristina of Holstein-Gottorp is an example of the ambivalent attitude prevalent toward female regents. Her contemporaries accused her of pushing her husband to force his rival’s supporters into submission. She was described as an evil and power-hungry queen. However, more recently her role in the political conflict between Karl and Sigismund of the early 1600s has become reconsidered as that of a mediator rather than instigator.

Kristina of Holstein-Gottorp never shied away from imposing her political will publicly on her own family members and others and was surely no worse than any of her contemporary male leaders. However, describing her as evil and power-driven when she was simply exerting her power and influence as queen facilitated the questioning of whether she, as a woman, had enough sense, composure and capacity to rule over a kingdom.

Kristina of Holstein-Gottorp’s priest chose instead to emphasise her generous gifts to the poor and the sick. In the spirit of a good household steward she had cared for both her courtiers and her servants. Further, Kristina of Holstein-Gottorp was also described as “the lovingly faithful mother and nursemaid of the whole country and all its estates”. This view of the dowager queen differs significantly from that presented by her political opponents.

Kristina of Holstein-Gottorp died at Nyköpinghus in 1625. She is buried at Strängnäs cathedral. 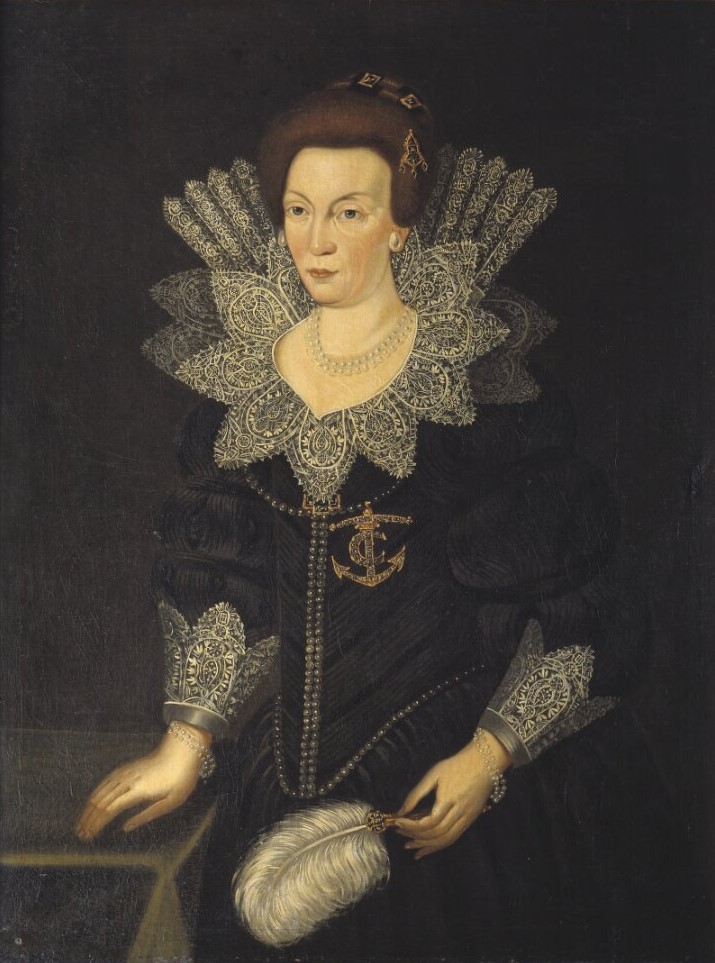