Karin Sverenius Holm’s whole career was spent working as a visual artist. She was active in both Malmö and in Vik, Österlen. Her painting style moved from fine-toned realistic depictions and expressive portraits to a bolder more colourist-conscious form of modernist expression.

Karin Sverenius Holm was born in Malmö in 1950. She was the first child born to Harry Sverenius and Ingegärd Ölander. In 1952 the family moved to Landskrona following her father’s appointment as engineer at a confectionary factory there, and the family expanded to include two boys named Lennart and Torsten. Due to Harry Sverenius’ impatience and grandiose dreams in the period leading up to 1969 Karin Sverenius Holm ended up on residents’ registers for six different places. Eventually the family returned to Malmö. Karin Sverenius Holm’s childhood was thus characterised by constant upheavals, moving to different textile-industry centres. Nevertheless, her positive outlook on life and her determination to study helped her to navigate the turbulent 1960s, an explosive time which came to serve as the sounding board for her artistic development.

In 1963 the family moved to Norrköping, where Karin Sverenius Holm worked hard at school, not only mastering theoretical skills but also refining her drawing and musical skills. Beginning with playing classical guitar, classical music soon became a part of her life and she spent more of the first term of high school rehearsing with Norrköping symphony orchestra than she did attending her school lessons. Karin Sverenius Holm also tried her hand at tennis at Norrköpings Tennisklubb. After a few years she had advanced to become one of the top junior players in Sweden. She got all the way to the finals of Båstad international ladies’ singles in 1967 and was projected to have a shining furture as a professional tennis-player.

However, that was not to be. In the spring of 1969, following her parent’s draining divorce, the family split with some moving to Malmö. This included her mother, her new male partner and Karin Sverenius Holm and her younger brother Torsten. Her father and her middle brother Lennart remained behind in Norrköping for a few years. Karin Sverenius Holm continued her high school education in Malmö. One night, at a restaurant, she and her schoolmates began to chat with the artist Cai Selandar. He was twenty years their senior and could discuss politics and art with an air of authority. Karin Sverenius Holm fell in love with him and at the age of 19 she moved into his studio apartment in Malmö. It was not long before she took her first steps on the road to becoming an artist in her own right.

Through Cai Selander, who had studied at the Otte Sköld painting school, Karin Sverenius Holm learned the fundamentals of classical painting techniques. Over the course of the ensuing years the couple exhibited their art at various galleries in their hometown and throughout the country. They also held a much acclaimed solo exhibition at Galerij den Bellaert in Antwerp, Belgium. Karin Sverenius Holm had earlier found employment at Malmö Museum (now Malmö Museer), where she spent a couple of years working as a decorative painter and illustrator. At the same time she improved her painting skills and became a well-liked portrait painter, for which she gained many commissions. She also painted still-lifes portraying garden fruits and berries as well as the ropes, sails, and anchors found in fishing hamlets. In 1981 Malmö city held a competition to decorate a windowless corridor in the Children’s surgery unit at Malmö Allmänna Sjukhus. Karin Sverenius Holm won the competition: she painted a series of life-sized children, seen through imaginary windows which open up the closed rooms off the hospital corridor to reveal idyllic scenes.

After a quarter of a century spent together with Cai Selander Karin Sverenius Holm decided that she had to move on. She moved to Österlen, drawn by the different light, new atmospheres, and socialising with other culturally-minded individuals. She and her mother rented a house for a week down by Vik harbour, an old fishing village which lies between Simrishamn and Kivik. Her mother registered Karin Sverenius Holm to attend Allkonstakademien (“the Academy of Gesamtkunstwerk”) in Österlen in the summer of 1998. This proved to be an overwhelming experience for Karin Sverenius Holm. The five-day course revealed how to conquer the boundaries separating various art forms. The instructors included Ingvar Holm, a professor of theatre studies, Hans Pålsson, a professor of music and a pianist, the author Jacques Werup, the artist Gerhard Nordström and Staffan Valdemar Holm, head of a theatre and a director. Karin Sverenius Holm attended the course two summers in a row and met her second life partner and muse, the aforenoted Ingvar Holm. Neither of them cared about the age difference – he was 27 years her senior – as they both felt they had met their soulmate.

Karin Sverenius Holm quickly moved into her partner’s house in Vik and they began a shared life within the world of literature, theatre, music, and art, travelling together through the valleys of Österlen and across its beaches and abroad to Spain and San Michele on the island of Capri. Karin Sverenius Holm experienced some of her most productive days on Capri. Her paintings became richer, sharper, she experimented with form and colour and motifs. Her husband ensured that exhibitions were organised for Karin Sverenius Holm to display her work. In 2005, the same year that the couple got married, the foundation Tomelilla konstsamling organised a major exhibition at Tomelilla art gallery called Kvinnors liv och landskap: Sex generationer konstnärinnor på Österlen. The following year De olydigas konstsalong (i.e. “Art salon of the Insubordinates”) was held at Christinehof castle in which six artists – C.O. Hultén, Ulla Viotti, Jörgen Fogelquist, Gösta werner, Jørgen Nash, and Karin Sverenius Holm – displayed work reflecting various aspects of disobedience. One of Karin Sverenius Holm’s paintings, På väg till Christinehof which is now permanently displayed at the castle, was a modern reinterpretation of the Danish artist Constantin Hansen’s 1837 painting Et selskab af danske kunstnere i Rom.

Ingvar Holm paid homage to his wife by producing an oversized book entitled Fröken Karins världshistoria. ORD möter TON möter BILD, published in 2009. This is a richly-illustrated book containing works by Karin Sverenius Holm and other well-known artists of the modern era. Karin Sverenius Holm creativity and her social skills made her a popular individual with an extensive contact network. The couple became a cultural institution at Österlen, setting up the Karinholm art gallery which provided a place where people and artforms could meet. The couple were both members of ÖsterlenAkademien and Karin Sverenius Holm was elected chair of Nätverket Qlara for entrepreneurial women in Österlen. She was also a member of Konstnärernas Riksorganisation (national artists’ organisation of Sweden).

The last part of the couple’s journey together was dark. Ingvar Holm suffered a stroke and Karin Sverenius Holm became his guardian. The stress of trying to stay financially afloat, painting, performing carer duties, as well as managing everything else became too much for her. Karin Sverenius Holm suffered a severe brain haemorrhage. The couple died within weeks of each other in February 2017. 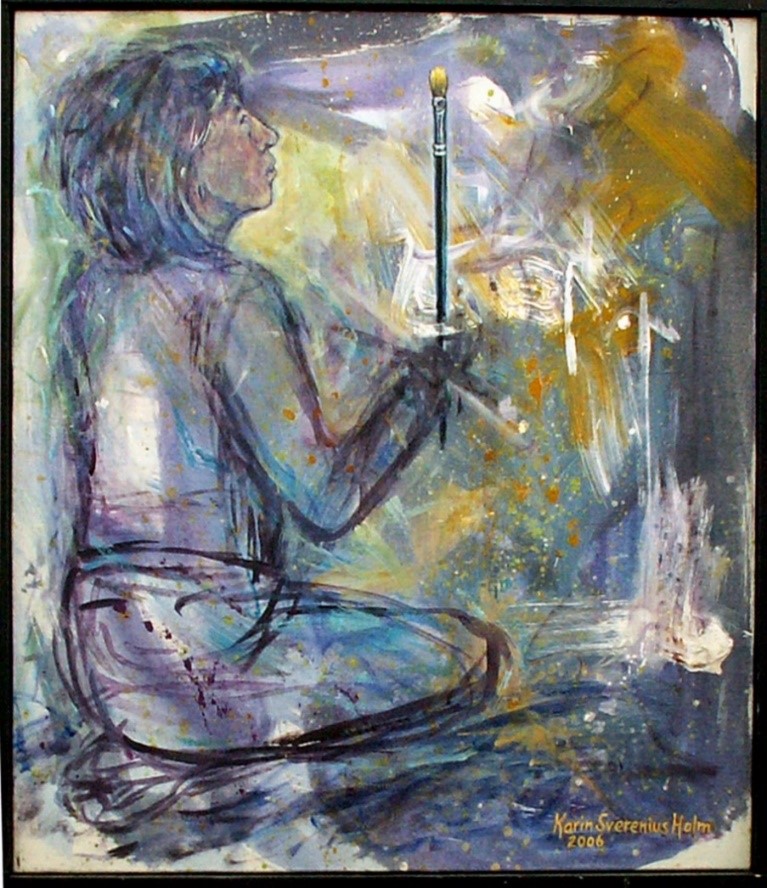