Karin Lindberg was a Swedish elite gymnast who won several medals at international gymnastics championships during the period of 1950–1956.

Karin Lindberg was born in Nederkalix in 1929. At the age of two she and her family moved to Stockholm where she started to do gymnastics in 1945. She joined GF Stockholmsflickorna after having met the association’s leader Karin Harvig at a summer sports camp. This was the first year that Swedish gymnastics competitions were held, both at the individual and at the team level, and for both men and women. Initially the Swedish competition rules differed significantly from international rules. However, thanks to Swedish efforts at the international gymnastics congress of 1947 the Olympic Games programme for the following year adopted a form of gymnastics which meant that Scandinavian gymnastics gained significant foothold.

Karin Lindberg’s public breakthrough can be dated to 1947. By that time she had progressed so far that she was selected as a reserve for the first unofficial international ladies’ competition in Stockholm, held between Sweden and Belgium. She was then inspired to increase the intensity of her training. In the 1948 SM (Swedish championship) she unsuccessfully fought an exciting individual campaign against her rival Göta Pettersson. Nevertheless, the trio from the Stockholmflickorna club – Karin Lindberg, Göta Pettersson, and Ann-Sofi Pettersson – won the team medal.

The Swedish Olympic Committee sent eight ladies to compete in the gymnastics team competition at the 1948 London Olympics. Karin Lindberg was among those who qualified for the Olympic team through the selection trials. The other women included Ingrid Sandahl and Göta Pettersson. Eleven ladies’ teams attended in London and the competition comprised seven separate events. The first was floor gymnastics without apparatus and here the Swedes won outright. Sweden remained highly placed until the very last event, floor gymnastics with apparatus, in which the Swedish team opted for the rope. The chance of winning the bronze medal seemed very likely. According to Olympiaboken the Swedish use of the rope caused “complete confusion in the minds of the judges” and “faulty judging” led to Sweden falling into fourth place. Despite this the gymnastics team and its leader, Tora Amylongs, won great plaudits in general. Karin Lindberg emerged as the best on the team, achieving first place in the floor and vault events, but as the ladies’ competition at this Olympic Games only encompassed team medals she could not qualify as an individual.

The success of the Olympics led to even more intense training throughout 1949, with a palpable optimism in terms of future competitions. This was proven correct during the July 1950 World Championship in Basel, Switzerland which involved a heavily expanded programme of events in comparison to previous competitions. The Swedish team comprised several new names – Evy Berggren of Skellefteå GF, Vanja Blomberg and Gunnel Ljungström of Huskvarna GF, Hjördis Nordin of GF Idrott Landskrona, and Ann-Sofi Pettersson of Stockholms Studenters IF – in addition to the now experienced Karin Lindberg, Ingrid Sandahl and Göta Pettersson. The team, led and instructed by Carin “Caj” Delden of Huskvarna, won gold in the team competition. The Swedish ladies also brought home the gold for “team competition in floor gymnastics with portable apparatus”. Kaija-Leena Bergérus was responsible for the choreography and training for this discipline, which involved two red balls as apparatus. The team performance generated a lot of support and plaudits. Idrottsboken was one of these congratulatory voices albeit it also reminds the reader that not only were the three premier teams from the London Olympics missing from this competition but so were the Soviet team as well. Nevertheless, the Swedish team returned home with another two medals, both won by the 18-year-old Ann-Sofi Pettersson, who had already formed part of the domestic elite for a couple of years. She won gold in the rings event and came second overall for the four individual events of floor, beam, rings, and vault. The press coverage involved the use of a lot of superlatives when describing the Swedish team’s performance.

Seven of the eight ladies who competed at the 1950 World Championship returned in the team which represented Sweden at the Helsinki Olympic Games in 1952. Once again Carin Delden was the team leader. The one team change was Gunnel Ljungström’s replacement by Gun Röring of Umeå GF. When the team’s chances of success were discussed it was emphasised that this competition – given that all nations including the Soviet Union were attending – would be very tough. Sweden did not make the cut in the competition between nations, described as a 9-event challenge for 6-person teams. As had happened in London, Sweden came in fourth place and once again, according to Olympiaboken, the reason was “minor Swedish misfortunes in the judging” which caused “many and deep disappointments” amongst the Swedish ladies’ team. Once again, however, Karin Lindberg’s efforts led to her being ranked as the top member of the Swedish team. A great triumph was achieved in the floor event for 8-person teams with portable apparatus as the Swedish team consummately performed the programme using red balls again designed by Kaija-Leena Bergérus. The total number of points the team received pushed them, by a significant margin, ahead of the Soviet and Hungarian teams who populated the lower end of the podium. The Swedish supporters expressed great enthusiasm about the ladies’ gold medal. Karin Lindberg was subsequently appointed Sportswoman of the Year.

Karin Lindberg was the sole remaining member of the 1948 Olympic team who made it into Carin Delden’s Swedish team for the Rome World Championship in 1954.The new members included Eva Rörströrm from GK Ryck in Umeå, Doris Hedberg from Skellefteå GF, and Gun-Britt Broman from Sandvikens GA, all of whom enjoyed favourable attention from the press and showed they were determined. According to Olympiaboken the competitors were “terrifying”. The Swedish team came in eighth place in the team competition. In the group floor event – previously the Swedes’ best event – they put in a strong performance, again using balls as the apparatus, which landed them the bronze medal, behind the supreme Hungarian and Soviet teams. The Swedes gained two further medals in the individual competitions. Ann-Sofi Pettersson, now the star member of the team, won a shared gold medal with a Soviet competitor for the vault, and then Evy Berggren won bronze behind those two. The press lauded the Swedish team’s performance. Ann-Sofi Pettersson (who soon thereafter changed her name to Colling) was appointed Sportswoman of the Year in 1955, lending extra shine to Swedish ladies’ gymnastics.

During 1954 a troupe of Swedish male gymnasts undertook a lengthy exhibition and propaganda tour of the USA. The Swedes were a big hit and were invited to repeat their visit the following year, this time with an accompanying ladies’ troupe of gymnasts. This second tour finished in New York in March 1955. As Karin Lindberg and Ann-Sofi Colling were walking back to their hotel they were struck by a car to their severe injury. Karin Lindberg was so grievously injured that she spent a month at an American hospital. A long and tiring period of rehabilitation ensued and doubts arose as to whether either woman would ever return to elite gymnastics. Happily they did. At the end of the SM in October both gymnasts were in a class of their own. Having run a tough personal rivalry in which Karin Lindberg initially was on top it was Ann-Sofi Colling who, by a very small margin, brought home the Championship. She also won the 1956 SM, her seventh in a row, whilst Karin Lindberg did not manage to podium.

The rules regarding team numbers for the floor event had changed for the Melbourne Olympic Games in 1956: now it was a 6-person instead of an 8-person team. Karin Lindberg competed in what was her third Olympic Games in a row. In a change from the 1954 World Championship Vanja Blomberg now appeared in the role of team leader rather than competitor whilst Maud Karlén from GK Hermes, Stockholm was a brand new team member. The top places were dominated by the Soviet and Hungarian teams. The combined Swedish effort only achieved eighth place in the team competition. In the group floor event, as tradition demanded, the Swedish team successfully podiumed, once again using red balls as their apparatus they won silver, only defeated by the Hungarians. Ann Sofi-Colling once again displayed her ability to deliver when it was most required, winning bronze in vault. The Swedish gymnastics team could once again be termed first-class.

Karin Lindberg’s final elite competition was the 1956 Olympic Games. Three weeks before the Games she married Erik Lindén, a leading figure within AGF Örebro who had for several years been a trainer of the male national gymnastics team. The newlyweds settled in Örebro, where Karin Lindberg lived, a widow from 1977, until her death in December 2020. 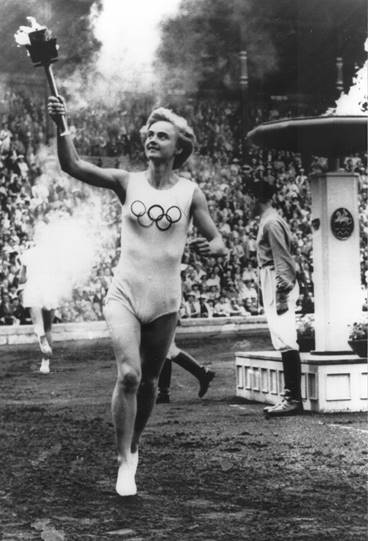 Karin Lindberg carries the torch at the opening ceremony of the equestrian events of the 1956 Summer Olympics, held in Stockholm. Photographer unknown (privately owned image)