Kaj Tenow was a director and woman pioneer in infomercial or propaganda film and election film, two important but neglected genres in Swedish film. She was also active as an advertising film-maker and was often heard as the speaker in her own films.

Karin (Kaj) Tenow was born in Ängelholm, the daughter of Seth Aspegrén, an agricultural engineer. The family moved around a good deal before they settled down in Gävle and finally in Stockholm. In 1929, at the age of only 17, she was accepted at Dramaten’s theatre school but only attended for one year. After a couple of roles at Dramaten, she started being offered film roles, both in full-length feature films and short infomercial films. In 1938, she made her debut as director in the latter genre with Studieresan that was part of the propaganda for milk. Her directing debut depended according to herself on the fact that her husband Christian Atterdag Tenow (the son of the author Elna Tenow), who was the head of the Swedish film industry’s section for school films and advertising films, was in dire need of a director for a short film for which they had a commission. Many films were then produced in close cooperation in which her husband wrote the manuscript while Kaj Tenow directed the film. She was also her own film-cutter.

In a reportage in Vecko-Journalen in 1944, her characteristics as an ideal film director were emphasised: reliability, sense of detail, precision, patience, willingness to collaborate, and ability to make quick decisions. Her background as an actress was important for her sensitivity to hearing lines. The films were also strikingly well made with sensitive instruction of the people involved.

Film historians have in general more or less ignored the short propaganda or infomercial films that were made. The same is the case for the election films that bloomed from the 1920s until the 1950s. Yet they constitute interesting parallels to ordinary feature films. This is particularly the case with election films that contain themes with direct equivalents in contemporary feature films. Political parties invested considerable resources in election films. At most, half of the election budget could be invested in these short films, often with well-known actors. They were shown over the whole country and seen by large numbers of people. As an example of such distribution may be mentioned Kaj Tenow’s film for the Bondeförbundet (now Centerpartiet), De unga tar vid, in 1946, of which 50 copies were distributed nationwide.

Behind the infomercial and propaganda films were often large organisations that wanted to spread their message and propaganda with the help of films, that became an expression of the modernity that generally made advances in society from the 1930s onwards. The aim was to convince citizens of the advantages with progress in societal development, whether it was a matter of laundry advice, hygiene, or the value of drinking milk. In many cases, the target group was schoolchildren and it is impossible to overestimate the importance of this type of film in creating many generations of schoolchildren’s image of society and values.

During the second world war, other aspects of propaganda film appeared that concerned the home economy of the population. In both films and books, the significance of taking advantage of those assets offered by nature was imprinted. A typical example of this was Kaj Tenow’s Klara konserverar in 1942, or I bärmarkerna in 1941.

When Kaj Tenow was interviewed in Vecko-Journalen, she revealed her thoughts on film propaganda in connection with the then topical Landet kallar in 1944, that was made by commission of the authority Arbetsmarknadskommissionen. It was a film on the theme of encouraging people at leisure in the summer, especially young people, to sign up for voluntary contributions to agriculture and air surveillance. She considered that type of film to be so important from the point of view of the community, and so valuable that working on them gave people special satisfaction compared with working on an ordinary feature film. She referred to the film pioneers the Lumière brothers, who according to her, had mostly considered the scientific ambitions of the film medium. She did not believe that they had thought of anything else. In her opinion however, film was a light and pleasant form of information and education.

It is perhaps hazardous to speak of “authorship” when it comes to an expressly commissioned film-maker, but it is possible to divine a clearly expressed women’s perspective in a film like the one mentioned above: De unga tar vid. Mikaela Kindblom opines in her article in Svensk Filmdatabas that many of Kaj Tenow’s films were about subjects like the production of milk and modern house-keeping and that was because she was a woman. The documentaries became a kind of education for housewives comparable with the housewife films that started being produced in the 1950s. In that regard, she followed up the propaganda for new methods in the household for which her mother-in-law Elna Tenow propagated in her books, in which she put forward the ideas of the hygiene reform movement, with the aim of raising the status of household work and the housewife.

Most of Kaj Tenow’s films are quite unknown today. On the homepage of the Film Archive, seven films can currently be seen, among them the election films mentioned above. Altogether, about 30 films directed by her are listed in Svensk Filmdatabas. One commissioned film she made for an English producer in 1947, Peter and Pat in Lapland became topical once again through a TV film by the documentary film-maker Johan Palmgren: Under ett täcke av snö in 2009. Based on a photograph, he discovered this whole history about two children in Lappland. His point is that the film from 1947 was a cheerful school textbook description of an exotic setting that reflects the condescending view of those days of the Sami as lower-standing human beings.

Kaj Tenow died in 2001. She is buried in Bromma Cemetery. 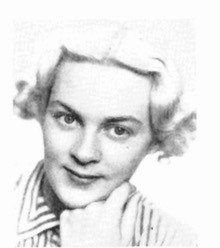