Jenny Rossander was an educational reformer, a mathematician, a natural scientist, and a proponent of womens’ issues. She campaigned for women’s educational rights and ran, along with her sister, a generalised adult education course for women, colloquially known as “Rossanderska kursen”.

Jenny Rossander was born in Stockholm in 1837, as the sixth of nine siblings. Her father had obtained doctorates in both philosophy and medicine, and was a well-known medical practitioner in Stockholm. He died young, and as a result, from the age of twelve onwards Jenny Rossander had to contribute to the family finances. She spent a few years working as a seamstress for a clothes designer before becoming a governess when she was 16. In 1859, Jenny Rossander and her sister, Alida Rossander, six years her junior, began to attend the newly-established “Lärokurs för fruntimmer” (educational course for women). This experimental course had resulted from an initiative taken by Per Adam Siljeström, a physicist, an educator, and a politician. . This experimental course had come about through the initiative of some men from within Stockholm’s radical circles, under the leadership of Per Adam Siljeström, a physicist, an educator, and a politician. It was aimed at prospective female teachers and those women who wanted to further their education beyond what was offered at the girls’ finishing schools of the era. It consisted of a couple of lessons in the late afternoon of every weekday as well as suggested work to complete at home. The teachers, who received no compensation, were men who came from the contemporary academic elite. The students were expected to largely determine their own direction of study; they could take broader survey courses or they could specialise in just one or two subjects. The options for specialisation included natural sciences and mathematics, which was a novel development in women’s courses. Indeed, this particular development was considered sensational by the female members of the bourgeoisie and generated a lot of interest. Alida Rossander and her sister Jenny quickly became two of the top students on the courses, particularly excelling at mathematics.

Lärokursen för fruntimmer existed for only two years. In 1861 the advanced female teacher training programme Statens seminarium för bildande af lärarinnor (later known as Högre lärarinneseminariet) was established in Stockholm. Some of the most intelligent students from Lärokursen för fruntimmer, including the Rossander sisters, were employed as tutors and teaching assistants. Alida Rossander was only 18 years old at the time. This employment not only gave them teaching experience but also enabled the women to deepen their knowledge of various natural sciences. Despite being the only teachers on the programme who lacked teaching qualifications, the two sisters also taught mathematics. Following on from pedagogical discussions organised by Fredrika Bremer, which were held with young students from the training programme, Jenny Rossander formed a close friendship with Bremer.

In 1864 Jane Miller Thengberg was appointed as the new director of the school. She had no time for the relatively unstructured and academically focused curriculum, and set about reorganising the enterprise into a more fixed-structure teacher-training programme with a predetermined course of studies. The primary focus lay on the humanities, while mathematics and the natural sciences were practically removed from the curriculum. As a result, there was no longer room for the Rossander sisters.

Jenny Rossander thereby lost her income and had to abandon her plans to study mathematics at Uppsala. However, the sisters’ friends from Lärokursen för fruntimmer responded quickly on her behalf. Jenny Rossander, who was only 27 at the time, already embodied a symbolic importance as a woman mathematician and natural scientist who also had extensive teaching experience. She received multiple offers of work from a variety of sources. Per Adam Siljeström employed her as a governess to teach his sons. She was also employed as a teacher on the short preparatory course for those applying to the female techer training programme Högre lärarinneseminariet, which had been created by Martin Schück, one of its former teachers. Of greatest importance was, however, the friendship that existed between Jenny Rossander and the Wallenbergs, André Oscar and Anna. The couple made her largely responsible for teaching their many children; André Oscar Wallenberg had a total of 20 children, 14 of which with his second wife, Anna. Jenny Rossander set up a teaching facility in the home she shared with her sister and her mother at Götgatan 41. This informal school was attended by the children of her brothers, the Wallenbergs, and their friends. It ran for several years. One of the pupils was Gulli Petrini, one of Jenny Rossander’s nieces, who had lost her mother at an early age.

Jenny Rossander also received support from Sophie Adlersparre. She began to contribute articles to the magazine Tidskrift för hemmet, including a three-part series concerning the teaching of mathematics to girls in 1866. She would later also write for the newspapers Stockholms Dagblad and Stockholms Posten, the latter founded by André Oscar Wallenberg in 1868. In 1864 Jenny Rossander and her sister Alida were also tasked with running one of Sophie Adlersparre’s so-called “Thursday schools”. This was a philanthropic educational enterprise focused on providing an education of a “worthy character” for “the daughters of the educated and working classes”. Those who were going to teach these classes required guidance from more experienced educators, and so they were sent to the Rossander sisters’ school for training.

It was not long before the two sisters developed the idea of opening up an evening school for these teachers based on the same model as the defunct Lärokursen för fruntimmer, using the same educational setup with a lot of space for mathematics and the natural sciences. They started their enterprise in October 1865 and formally named it “Lärokurs för fruntimmer”. It would colloquially become known as “Rossanderska kursen”. Jenny Rossander was the director of this enterprise while the board comprised her mother Sofi Rossander, Anna Wallenberg, Ebba Lind af Hageby, and Fredrika Limnell.

The course ran for 17 years and offered classes in a number of different subjects. The focus lay mainly on mathematics, the natural sciences, and the Swedish language. With time, subjects would branch out to cover foreign languages, physiology, health and hygiene as well as literature and art history. Jenny Rossander and her sister Alida both taught, as did many well-known men from the academic elite. In 1872 Jenny Rossander also initiated a sewing-course for women who wanted to learn to sew their own clothes, and this proved a very popular course. In 1876 the students on Rossanderska kursen translated Victor Rydberg’s tale Lille Viggs äventyr på julafton into French, which led to a correspondence between Jenny Rossander and Rydberg. There were no entrance requirements to join the courses and the ages of the participants varied widely, from just 12 years old to around 50. A fee was taken but students from poor homes could attend for free. The intention was that a three-year attendance was required in order to gain qualifications but some students carried on studying for nearly a decade and those women who did not have time to do the relevant homework could simply audit the classes. In total over a thousand women attended Rossanderska kursen between 1864 and 1882, many of whom later made important contributions to educational enterprises.

Jenny Rossander was known for her boundless energy and for her tireless desire to learn new skills. Her interests moved on from mathematics and increasingly focused on the natural sciences, but she also undertook her own language studies, including Latin. For a couple of years she attended a discussion group led by Pontus Wikner, a philosopher from Uppsala. Subsequently her interest in pedagogics became stronger.

The French pedagogue and feminist, Marie Pape-Carpantier, gained a lot of notoriety amongst those involved in education in Stockholm during the 1860s, particularly amongst those engaged in philanthropic educational efforts. Jenny Rossander met Pape-Carpantier several times in Paris and translated three of her books into French. During the first Swedish girls’ school conference, held in 1875, Jenny Rossander was an active participant in the discussions. In 1879 she was appointed to serve on the Swedish delegation at the first international educational conference held in Brussels. Of central importance to her educational efforts was, among other things, the belief in women’s ability to formulate their own educational needs, and to take responsibility for their studies. In other words, seeing the individual as the subject within the educational process. Jenny Rossander’s activities thus point towards the emancipatory educational ideas that contributed, around the turn of the twentieth century, to the formation of what became the modern public education effort. During the 1860s Jenny Rossander was on the board of a volunteer association for the care of wounded in wars, called Förening för frivillig vård av sårade och sjuka i fält (later Röda korsets damkommité för sårade i fält), where she was responsible for collecting textiles used to make wound dressings. Thanks to her linguistic and sewing skills she was also appointed leader of the section focused on women’s work which was inaugurated at the 1873 World’s Fair in Vienna. The intention was to highlight Swedish women’s efforts within various areas such as cottage industries, refined homemade and artistic handicrafts, art, and printed works. This initiative eventually led to the establishment of the handicrafts association Handarbetets Vänner.

Whilst attending the Vienna World’s Fair Jenny Rossander met Friedrich von Tschudi, a baron, natural scientist and politician, who was president of the Swiss exhibition section. They began to correspond, and continued to write to each other until 1879 when he became a widower and was free to marry her. Jenny Rossander’s sister, Alida, then took over the directorship of Rossanderska kursen while Jenny moved to St. Gallen in Switzerland, to live with her husband. However, she found herself in a very conservative society, where the women’s movement was not understood. She also faced opposition from her husband’s adult children who were unhappy that their father had remarried. Her husband soon fell ill and demanded that she care for him. Her time in Switzerland became a difficult period, although the marriage appears to have been a happy one.

Jenny Rossander’s husband died in 1886 and she then returned to Stockholm to help Anna Hierta-Retzius set up the first workhouses for poor schoolchildren. Jenny Rossander was in the meantime suffering from serious health issues as a result of developing hyperthyroidism, which left her tired and disillusioned. She was aventually admitted to the hospital now known as Ersta diakonianstalt, where she died in 1887, aged 50. 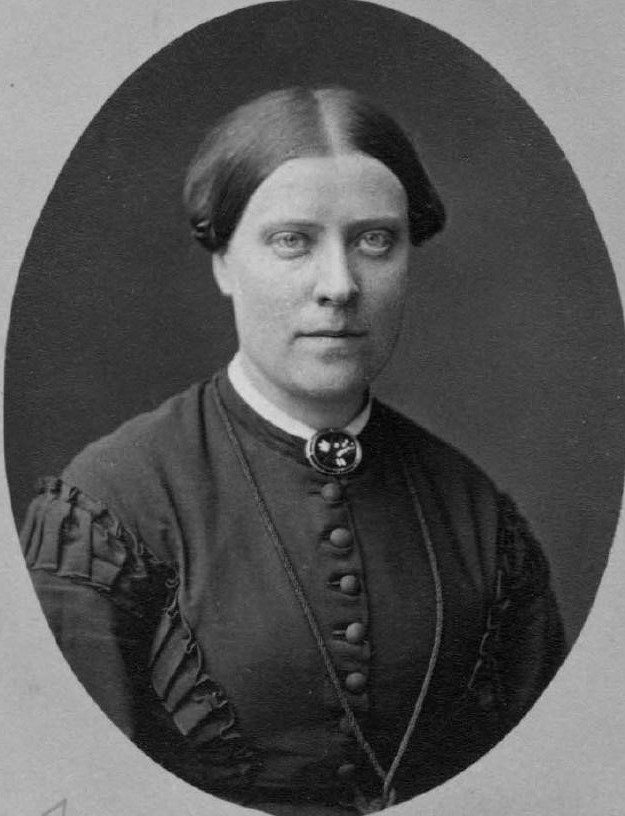