Ingrid Simonsson was an artist, a pattern designer, a handicrafter, a writer and an educator, active during the first half of the twentieth century.

Ingrid Simonsson was born on 17 April 1885 into a large family. Her father, Hans Gustafsson, was the managing director and head of the Vulcan match factory in Tidaholm. Her mother Fanny Gustafsson née von Zweigbergk, was, in her capacity as wife to the managing director, responsible for the social networks and contacts required for the family’s social status.

During her childhood Ingrid Simonsson was initially home-schooled, learning to play the piano and to embroider. She then attended a girls’ school in Skövde, where her elder brother Halvar was already attending a school. When she was a teenager Ingrid Simonsson received a camera from her father, which she used to document the area around her home in Tidaholm. She also began to keep a diary at an early age. Being of a wealthy family, Ingrid Simonsson had the advantage of choosing a field of study that interested her, and to have her studies funded. At the age of 15 she wrote in her diary that, once she had finished with school, she wanted to attend Tekniska skolan för kvinnliga lärjungar, a department of Tekniska skolan in Stockholm, now known as Konstfack, the University of Arts, Crafts and Design. She started attending the school in 1901 and qualified as a pattern designer in 1907.

In January 1910 Ingrid Simonsson travelled to Paris in order to study art and culture. She met up with two friends from Tekniska skolan, Elsa Gullberg and Greta Sellberg-Welamson. They visited Les Gobelins, the famous tapestry factory in Paris, and museums such as the Louvre and the Musée de Cluny, where Ingrid Simonsson took a particular interest in woven tapestries and faïence. It was during these travels that she met the artist Birger Simonsson. Together, they began to socialise in the Scandinavian artists’ circles in Paris. Birger Simonsson studied under Henri Matisse, along with many of the other Swedish artists in Paris. Their circle of friends included Henrik Sørensen and his wife Gudrun as well as Jane Gumpert and Leander Engström. Together with these individuals, Ingrid Simonsson spent a period painting in Le Plessis-Robinson, just outside of Paris. To convince Ingrid Simonsson’s mother of the of utility of Ingrid spending time away from the capital city, Henrik Sørensen wrote her a calming letter, focused on painting activities: “She [Ingrid] paints from morning until 6 in the evening and shows progress with every painting”. The group returned to Paris in the spring and towards the end of May they began their journey home to Sweden. Following her return, Ingrid Simonsson stayed in touch with Birger Simonsson and they corresponded frequently. In the summer of 1912 they were both in Fiskebäckskil, along with their painter friends from the period in Paris. During the spring of 1913 Ingrid Simonsson travelled back to Paris in the company of Einar Nerman, Maj Bring, and Anna Sahlström to visit Birger Simonsson. The following year Birger Simonsson and Gösta Sandel came to live in Kungälv, where Ingrid Simonsson also lived at various times. The two were married on 10 June 1915 in Stockholm. Their wedding was a civil service, despite their families’ consternation.

Following Birger Simonsson’s appointment as director of the Gothenburg art school Valands målarskola (now HDK-Valand) in 1916, the couple moved into an apartment on Arsenalsgatan in the city centre. The view from the apartment included a fishing harbour and the imposing redoubt Skansen Kronan. Their eldest son Helge was born in Gothenburg in 1918. In the autumn of 1919 the family moved to Paris where they lived on Rue de Furstemburg, close to the Louvre. Their youngest son, Erik, was born in 1924. Two years later, the family moved again, settling in Stockholm. In 1930 Birger Simonsson took on the post of professor of landscape painting at the Royal Swedish Academy of Fine Arts. The family spent the winter months in Stockholm and the summer months at various places on the Swedish west coast. Birger Simonsson died in 1938 leaving Ingrid Simonsson a widow with sole responsibility for providing for her two boys.

Prior to going to Paris, Ingrid Simonsson had only painted with watercolours. During her time in Le Plessis-Robinson she had begun to use oils and, during her later years, she increasingly focused on oil painting. She would often use oil paints on wooden panels. A number of these artworks have survived. Her palette comprised light colours, with an evident influence of the Colourist tradition. She tended to paint landscape studies but also still lifes. At the 1925 International Exhibition of Modern Decorative and Industrial Arts in Paris, Sweden was awarded a larger number of awards than any other country: 36 Grand Prix awards and a large number of honorary diplomas, gold- and silver medals. Ingrid Simonsson received one of the silver medals.

Ingrid Simonsson was also a pattern designer. Unfortunately, there remains no clear examples or definitive information of her designs. She did, however, create patterns for textiles, ceramics and wallpaper, and counted among her clients the Rörstrand porcelain factory. She also taught the subject of pattern design at Tekniska skolan, which eventually was reorganised as Konstfackskolan, and is now known as Konstfack. The exhibition Birger Simonsson – en färgstark modernist i sin tid, held the Museum of Bohuslän in 2019, included one of her silk embroideries, which had previously been on display at Röhsska museet in 1918, along with a selection of her paintings. Ingrid Simonsson also appears in many of her husband’s paintings. She is often portrayed as engaged in some form of handicraft, reading, or writing, either alone or in the company of her sons.

Writing was for Ingrid Simonsson a very important form of expression. She kept a diary throughout her life. During the 1930s, she is said to have started writing a book recounting her childhood in Tidaholm, but it was never published. Following Birger Simonsson’s death she provided for herself by writing reviews for the newspapers Göteborgs Handels- och Sjöfarts-Tidning and Sydsvenska Dagbladet. She also made a major effort to have Birger Simonsson’s artwork documented. She compiled newspaepr clippings about his exhibitions into notebooks, and saved his correspondence, personal papers and photographs. This material was preserved for posterity through various donations to the manuscripts department at Gothenburg University Library during the 1970s. Ingrid Simonsson also wrote a book entitled Konstliv kring det unga seklet, published in 1970. This book depicts the lives of artists and pioneers of modernism around the early twentieth century. The original manuscript is preserved in the archives.

It is difficult to generate an impression of how Ingrid Simonsson viewed her own art. Her book implies that the work of her husband remained in focus throughout her life. Ingrid Simonsson was endowed with a multifaceted talent that enabled her involvement in the spheres of pattern design, handicrafts, writing and teaching. But, the question remains as to whether she ever saw herself as an artist. Despite her participation in group exhibitions at Liljevalchs konsthall and the gallery Brinken in Stockholm, and the fact that her written work was published, it seems to be clear that her husband’s artwork always occupied prime place in her life.

Ingrid Simonsson died in Stockholm in 1977. 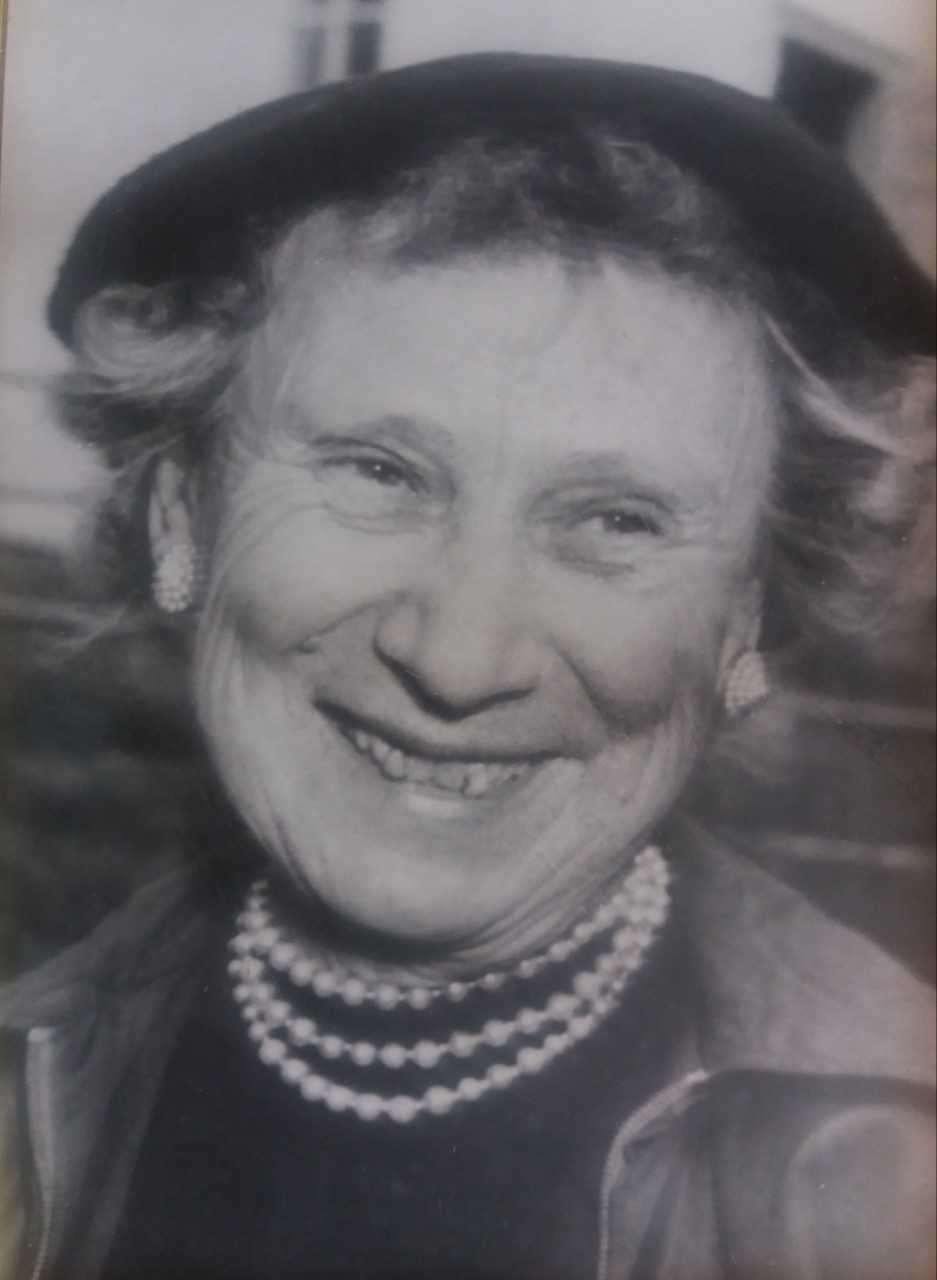