Ingrid Gamstorp was born in Lund. She was the second of three children born to Pehr Gamstorp, mayor of Lund, and his wife Greta, née Alsén. Ingrid Gamstorp’s elder sister, Kerstin, gained a Bachelor of Arts degree and qualified as a librarian, and then worked in Malmö amongst other places, whilst their younger brother Jan Olof had just begun his university studies when he died, aged only 19. The family had long-established Scanian roots and originated from the Kristianstad area, and Ingrid Gamstorp was always particularly keen to highlight her Scanian origins.

Ingrid Gamstorp graduated from the classical line at the Lunds Katedralskola in 1942. She then began to study medicine at Lund university, gaining a degree in medicine there in 1945. Reflecting her beliefs in right and wrong, and her concern for people who had fallen on hard times for various reasons – qualities which she displayed from a young age onwards – Ingrid Gamstorp became actively involved in the Red Cross in Lund during her student years, caring for rescued concentration-camp prisoners from Auschwitz and from Bergen-Belsen. She completed her medical licentiate in 1949. She spent the summers of 1948 and 1949 working as a junior doctor at Sankt Lars hospital in Lund. She then returned to working at the medical clinic in Helsingborg, treating adult patients. Ingrid Gamstorp did, however, develop a desire to become a paediatrician at an early stage and thus spent a few years working at the paediatric clinic in Kristianstad. She also met a patient who initiated her research project into an illness which subsequently was named after her: adynamia episodica hereditaria, or “Morbus Gamstorp” (Gamstorp’s disease). Nowadays the disease is referred to as hyperkalaemic periodic paralysis. To satisfactorily carry out her research and in the hopes of improved laboratory resources Ingrid Gamstorp returned to the Lund paediatric clinic in 1954 as a junior doctor and to the medical faculty at Lund university. At that time the head of the paediatric clinic was Professor Sture Siwe.

Adynamia episodica hereditaria is a dominant inherited illness with variable penetration and consists in sudden onset attacks to varying degrees of paralysis, primarily in the muscles of the arms, legs and torso. The breathing muscles and muscles innervated by the cranial nerve tend to be less impacted. The attacks are short-lived, end spontaneously, and always last less than an hour. They always occur during rest periods post-physical exertion and are more prevalent during damp and cold weather spells. The illness tends to reveal itself before a child’s tenth birthday, although individual incidences during an individual’s fourth decade of life are known. Children tend to suffer several attacks on a daily basis and the majority of sufferers experience at least one attack a week. During the teenage years and early adulthood these attacks are at their most debilitating, and after this the symptoms often decrease and become less troublesome. Elevated potassium levels are often recorded in a patient’s serum in conjunction with an attack. Given that these attacks tend to be short-lived, end spontaneously, and are frequently rather weak in effect there is no need for medication. However, medication exists to prevent an attack.

Ingrid Gamstorp successfully identified two families belonging to the north-eastern part of Kristianstad county and the north-western part of Blekinge county which suffered from the disease. The parish records traced one of these families back to the start of the 1700s, and the other was traced back to the early 1800s. Ingrid Gamstorp’s thesis identified 138 sufferers of the illness and described their symptoms whilst also demonstrating that raised potassium levels occurred in most sufferers in conjunction with an attack. On completing her research Ingrid Gamstorp defended her thesis, entitled Adynamia episodica hereditaria, at Lund university in 1956 with which she gained her PhD in medicine and in 1957 she became a docent in paediatrics. Her thesis won Svenska Läkaresällskapet’s (Swedish Medical Society) top prize in 1956.

Upon completing her thesis Ingrid Gamstorp continued working at the paediatric clinic in Lund as an assistant and junior doctor. In 1958, however, she received the Jerry Lewis Fellow stipend which took her to Harvard Medical School and Massachusetts General Hospital. She then spent two years, from 1959–1960, in America, primarily in Boston, but also a couple of months in Salt Lake City. Ingrid Gamstorp returned to Lund in 1961, at which point she was the most highly qualified paediatric neurologist in Sweden. In 1962 she took on a position as temporary chief physician and here she primarily focused on children with neurological problems. She realised, however, that the Lund clinic administrators did not have much interest in paediatric neurology. In 1967 she resigned from her post after having been head-hunted for a position as chief physician and head of clinic at the Jönköping paediatric clinic. She settled in well there. Ingrid Gamstorp is known to have described this time, at one point, as the happiest period of her life. She was finally able to run a paediatric enterprise at a major central hospital and also devote herself to what most interested her at the clinical level: paediatric neurology and in particular neuro-muscular diseases.

The first professorship in paediatric neurology in Sweden was established at Uppsala university in 1972. This academic post was combined with a position as chief physician in the field and Ingrid Gamstorp was offered the job. Despite being happy at Jönköping it was almost impossible for her to turn this down and so that same year, 1972, Ingrid Gamstorp moved to Uppsala. The professorship and post as chief physician remained hers until she retired in 1989. She continued living in Uppsala until her death in 2007.

As a medical doctor, docent, and professor, working at a university hospital, one is expected to undertake research, teaching, and clinical work. Ingrid Gamstorp produced almost 100 academic articles which were published in international and Swedish medical journals. She also wrote a textbook on paediatric neurology, entitled Paediatric Neurology, which was published in 1985. It is considered, both nationally and internationally, to be an excellent textbook in the field. She also served as one of the editors of Progressive spinal muscular atrophies, published in 1984. During her time at Uppsala Ingrid Gamstorp was also very interested in teaching and played a major active part in teaching medical students, up-and-coming paediatric neurologists, and other medical staff. As the years went by Ingrid Gamstorp also increasingly took an interest in medical ethics and how to inform parents and children about serious illnesses and death, as well as about how to treat people undergoing a crisis. Ingrid Gamstorp’s greatest contribution was, however, without doubt her role as a clinician and diagnostician, and it was for these roles that she gained international renown. This resulted in her often being invited to give lectures and to serve as a consultant on complicated medical cases. Her manner of treating children became famous, both within Sweden and further afield. However, despite her significant contributions the professorship she held was not made a permanent post after her retirement.

Ingrid Gamstorp was an individual with very strong personal integrity and a substantial amount of moral courage, which in turn meant that she was not shy about expressing herself and taking a stance when she perceived that something was wrong or that someone was in trouble. She was also a person who commanded a lot of respect, sometimes to a level of fear, amongst her colleagues and amongst other medical staff. This approach would often land her in trouble, primarily with her colleagues, as she was neither gentle nor diplomatic in her expression. Ingrid Gamstorp referred to her collegiate difficulties during her retirement speech at Uppsala in 1989, describing herself as a round plug trying to fit into a square hole. She asserted that she was the plug whilst the overwhelmingly male-dominated medical faculty served as the square hole. In response to her comment the then principal of Uppsala university, Stig Strömholm, stood up and said: “Sister we have erred”.

The academic heights Ingrid Gamstorp achieved, further to the thesis she wrote, included her appointment – the same year that she retired, 1989 – as promoter of the annual cohort of successful PhDs in the medical faculty at Uppsala and the awarding of an honorary medical doctorate at Lund university in 2006. Ingrid Gramstorp suffered a case of borreliosis a few years before her retirement which impacted on her peripheral nerves in her arms and legs. The infection took on a chronic nature which increasingly became more debilitating for her and during her final years of life she could hardly move about without the use of a wheelchair. Despite this she managed to travel to Lund and accept her honorary degree at the university.

The place at which Ingrid Gamstorp was presumably at her happiest was on the Danish island of Samsö where she had managed to purchase an older house. Ingrid always spent her holidays on Samsö as she insisted that as a university staff member she only ever had holidays and not vacations. It was during these times that she probably enjoyed the best of health, even though she found it hard to relinquish control of her department and her patients. She always wanted her mail to be forwarded to her and she undertook a lot of her correspondence work during the holidays. The last time she visited Samsö was during the summer of 2007 when she required the use of a helicopter both to get her there and to bring her home again.

Ingrid Gamstorp died in 2007, aged 83, at the care home in Uppsala where she spent her final years. The funeral service was held at Helga Trefaldighets church in Uppsala. Later, a memorial ceremony was held in Lund before she was buried in the family grave at Norra kyrkogården (the Northern cemetery) in Lund. 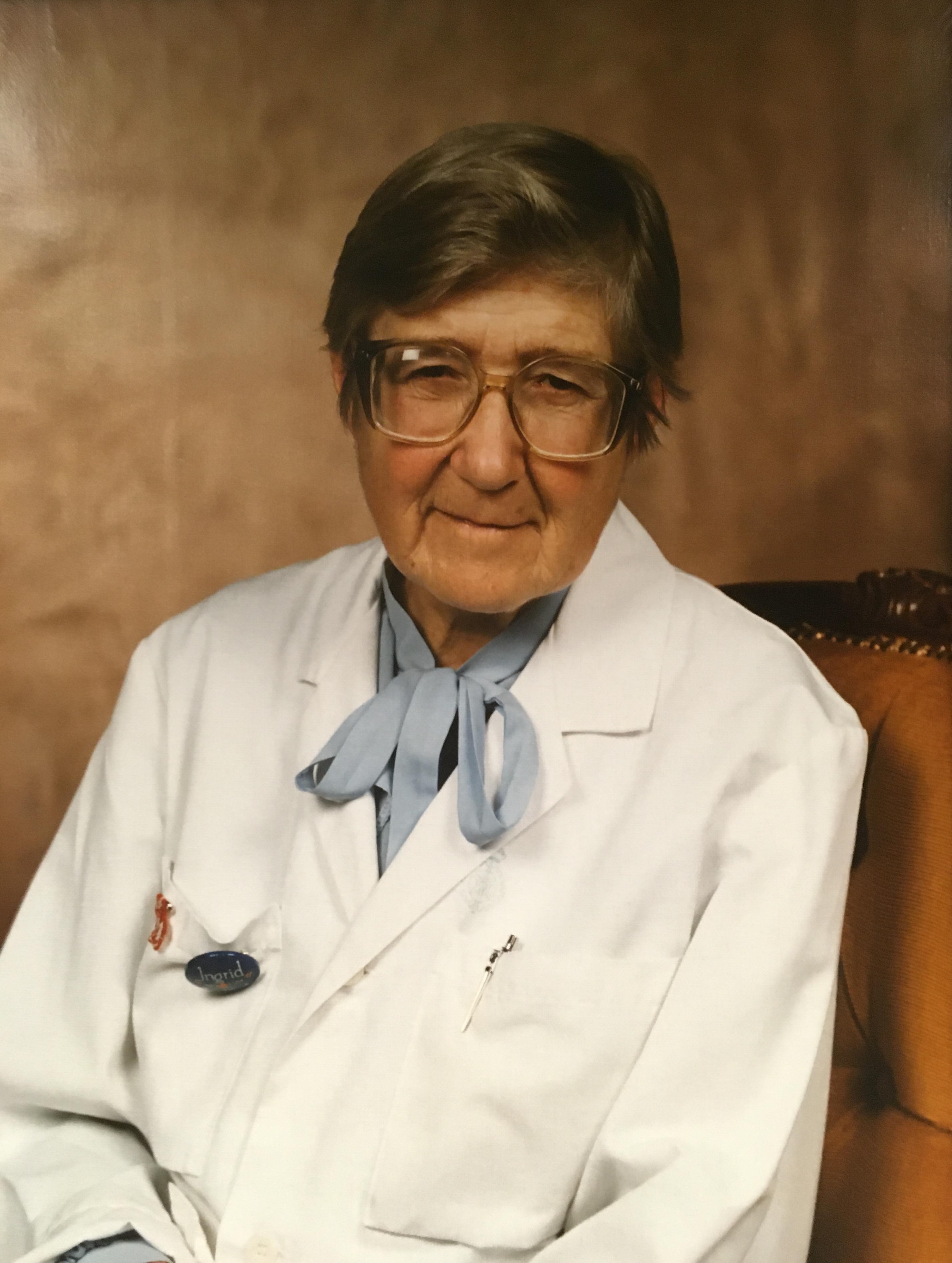