Ingeborg Schager was one of six children born to Axel Conrad Schager, a court of appeal accountant, and his wife Maria Sophia Ramsten. Her background was a well-to-do bourgeois Stockholm environment and she was brought up in family that valued and could finance the education of their children. Ingeborg Schager was enrolled at Statens normalskola för flickor (state girls’ school) which was the only state-run girls’ school which also served as a preparatory school for Högre lärarinneseminariet (HLS) (advanced female teacher-training programme). It was not unusual for students from normalskolan to continue their education by enrolling in that programme. Ingeborg Schager later became an affiliated teacher on that programme and, eventually, served as director of the domestic science school which grew out of the same programme in 1891.

After completing her studies at normalskolan in 1889 Ingeborg Schager embarked on a pioneering educational journey under the guidance of Ragnhild Brolinson, a public-school teacher who had studied cookery instruction in England. Ingeborg Schager was one of three students who signed up for practical and theoretical cookery classes at the school-cookery kitchen which had been set up at the Maria congregation public school in Stockholm. This new school subject became known as school cookery, in which cooking and food serving was combined with nutritional and budgeting studies. After completing a nine-month series of courses with Ragnhild Brolinson Ingeborg Schager graduated in 1890, then one of the first female school-cookery teachers in Sweden.

Many of the written works produced by Ingeborg Schager, together with Ingeborg Walin and their colleague and friend Gertrud Bergström, were diligently read and used in domestic science instruction in Sweden. The fact that their works were printed in many editions is testament to their popularity. These were basically cookbooks and handbooks, used in teaching, which combined recipes and directions with evolving texts on the principles of domestic science.

Ingeborg Schager’s collaboration with Ingeborg Walin and Gertrud Bergström not only coloured her professional life but also her private one. At certain times the three women lived together and, in addition to their joint professional engagements, they were also members in several of the same organisations. Not only did they join the core organisation of Svenska Skolkökslärarinnornas förening (Swedish school-cookery teachers’ society) but Ingeborg Schager and Ingeborg Walin were also members of the Stockholm branch of Svenska Kvinnors Medborgarförbund (Swedish women’s civic association). When Ingeborg Walin retired from her position as director of the domestic science school in 1919 to take up a post at Skolöverstyrelsen (the school board), Ingeborg Schager then replaced her as school director and remained in post until she herself retired in 1933.

Ingeborg Schager’s life’s work lay in teaching domestic science. For almost 50 years she both taught and ran training courses within that sphere. On her retirement Ingeborg Schager was honoured with the royal Illis quorum medal in recognition of her contributions to school cookery. However, her departure from the school did not mean an end to training people in the domestic sciences. Until her death she and Ingeborg Walin ran a private school in Stockholm where they trained catering supervisors.

Ingeborg Schager died in Stockholm in 1947 and is buried at the Norra cemetery in Solna. 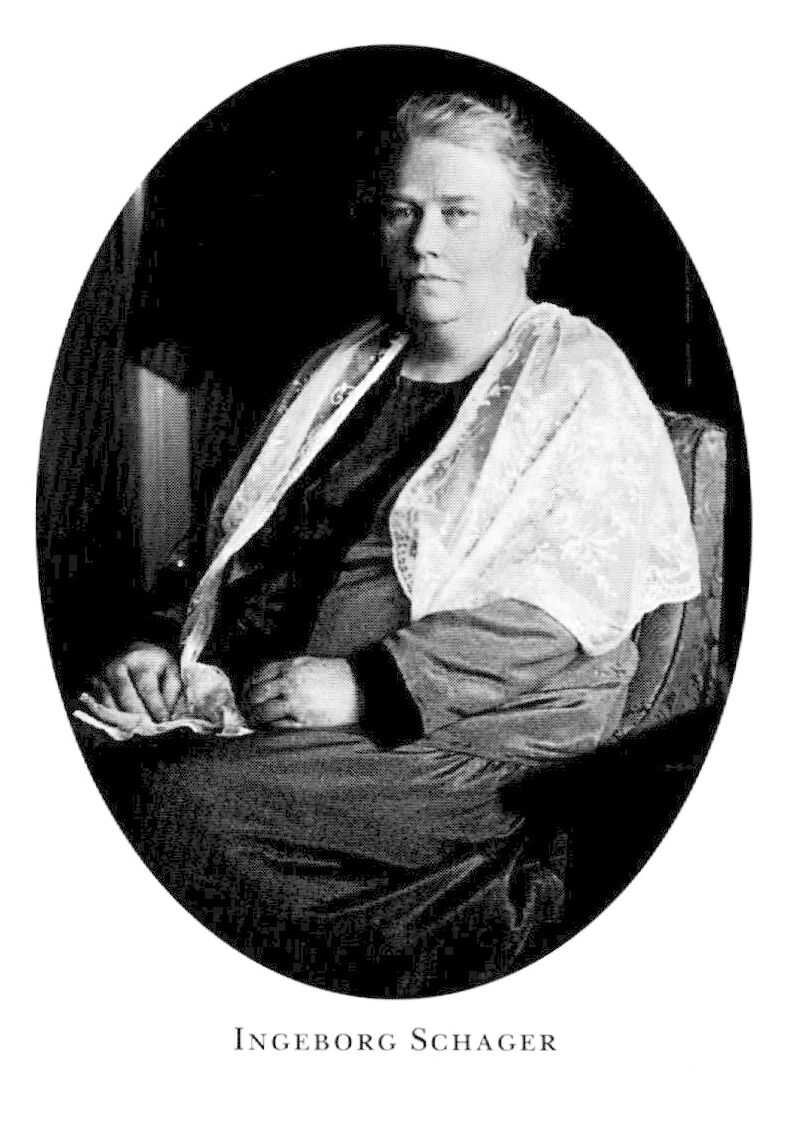