Inga Gill was a much-loved and versatile actor who was active during the second half of the twentieth century.

Inga Gill was the daughter of Folke Gill, a general manager, and his wife Stina. She was born in Södermalm, Stockholm in 1925 and she was an only child. Her first passion was dancing and during the 1940s one of the people she worked for was Birgit Cullberg and the Cullberg ballet. Inga Gill also spent a period of time in Paris as a ballet-dancer, but the longing to be on the theatrical stage won out. As a dancer she felt the lack of being able to expressing herself through the spoken word. She applied to the Stockholm Dramaten (royal dramatic theatre) school but was rejected, so she then spent the year 1943–1944 attending Willy Koblanck’s theatre school.

Inga Gill made her stage debut in 1943, appearing in the play Vem är jag eller När fan ger ett anbud, performed at Stockholm student theatre and directed by Ingmar Bergman. For a while she alternated between dancing and acting. All her acting occurred at several Stockholm theatres, including Nya teatern, Vasateatern, Oscarsteatern, Lilla teatern, Intima Teatern, Folkteatern, and Dramaten. In 1952 Inga Gill was headhunted by the head of Gothenburg theatre, Karin Kavli, to join that theatre, where she spent a couple of years working fulltime. Apart from that Inga Gill was a freelance for most of her acting career. She also went on several tours with Riksteatern through the years.

Inga Gill performed across a range of genres, encompassing dramatic plays, musicals, farces, operettas and revue shows, the latter of which included shows produced by Povel Ramel and Kar de Mumma. She often returned to perform in Kar de Mumma’s revue shows, and made a particular impression in 1964 with her own interpretation of the contemporary and popular character role of “Tjorven” in the Stockholmare, vet du vaad! revue show. Other notable stage roles Inga Gill performed include Dorine in Tartuffe in 1952, at Parkteatern in Stockholm along with Bonnie in Saken är Oscars at Oscarsteatern and Julia Körner in Swedenhielms at Gothenburg city theatre, both in 1953. She also appeared as Spelunken-Jenny in The Threepenny Opera in 1955, again at Gothenburg city theatre, Nanette in Blåjackor at Lorensbergs Cirkus in 1956 performing opposite Nils Poppe. She also played Dorothy Cleves in Any Wednesday in 1967 at Lilla teatern, Goldie in Fiddler on the Roof in 1970 at Riksteatern, Susan Smith in No, No, Nanette in 1975 at Oscarsteatern, and Josepha in The White Horse Inn in 1976 at Oscarsteatern. She performed the leading role opposite Martin Ljung in Niel Simon’s Plaza Suite in 1980 at Gothenburg’s Nya teatern, as Emma Klink in Spanska flugan in 1981 at Vasateatern, as Dotty Otley in Noises Off in 1983 at Vasateatern, as the nurse in Det stannar i familjen in 1988 at Folkteatern, and she reprised the role of Fräulein Schneider in Cabaret in 1994 at Intima teatern which she had first performed at Riksteatern in 1970. Inga Gill’s final stage performance was in * The White Horse Inn * in the autumn of 1999, at Trägår’n in Gothenburg.

Inga Gill made her silver screen debut in 1946 by appearing in Gustaf Molander’s comedy Det är min modell. She appeared in around 40 films throughout her career. Those from the 1950s include Fröken Julie in 1951, Vi tre debutera in 1953, Lille Fridolf och jag, Sjunde himlen, and Flamman, all three in 1956, Det sjunde inseglet in 1957, and Fridolf sticker opp! in 1958. One of the films she appeared in during the 1960s was Vi fixar allt, centring on Anita Lindblom and her hit “Sånt är livet”, in 1965. She was also in Viskningar och rop in 1973, in Raskenstam in 1983, and Amorosa in 1986. She also appeared in a number of ‘Husmor’ (Scandinavian infomercials aimed at housewives) films during the 1960s and 1970s. Inga Gill also provided the Swedish voice for Widow Stengelföhn-Glaad in the 1975 Norwegian stop-motion animated film Flåklypa Grand Prix.

The very versatile Inga Gill also appeared on TV in various contexts, such as Advent calendars, children’s programmes, drama series, soap operas, and entertainment programmes. She appeared in Gumman som blev liten som en tesked in 1967, Estrad in 1968, Från A till Ö from 1974–1975, Grabbarna i 57:an eller Musikaliska gänget in 1978, Varuhuset from 1987–1988, and T. Sventon praktiserande privatdetektiv, in 1989. During the 1980s she also provided a colourful and expressive contribution to several seasons of the game-show Gäster med gester, hosted by Lennart Swahn. Inga Gill’s final TV role was a part in I. Mankell’s 2000 thriller series Labyrinten.

Inga Gill also appeared on the radio where, by 1955, she had become the familiar voice of Maggan, Fridolf and Selma’s daughter in the popular series Lilla Fridolf. This was followed up by the film adaptations with Inga Gill appearing in three out of the four films, in 1956, 1958 and 1959. She also had a stint as a programme host on TV and stepped in as compere for Cirkus Benneweis.

Although Inga Gill herself would have enjoyed greater variation in her roles she very rapidly fell into the comedy bracket. She often jumped at any chance to tackle more dramatic material. On the silver screen her appearances tended to be in smaller roles and – apart from some exceptions – these films were rarely equal to her own talent. She often played waitresses or women who were either sweet or slightly edgy and temperamental, later replaced by mature female characters, who were charming and pushy. Over time Inga Gill, with her consummate line-delivery, became somewhat of a “grande dame” of farce. She was professional and meticulous, full of energy, swift-thinking and snappy in her replies, her body language was sensuous, and delivered a fiery and punchy comedic package. Unsurprisingly she was often relied on to form the comedic anchor in production after production, whether on stage or on TV. She was a firm favourite of the public for most of her just over fifty year-long career, largely thanks to her sense of comedic timing, her warm and gutsy charisma as well as her frisky and good-natured spontaneity.

From 1950–1956 Inga Gill was married to fellow actor Carl Olof Alm, durig which her daughter Annika Alm was born. Her second marriage, to another actor named Karl-Arne Holmsten, lasted from 1957–1995 and her second daughter My Holmsten was born. Both of her daughters went on to become actors themselves.

Inga Gill died in Stockholm in 2000. She is buried at the memorial garden in Katarina cemetery. 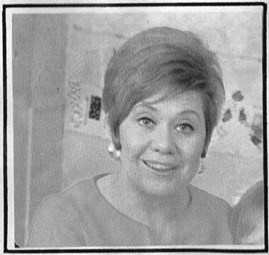