Hanna Pauli was a pioneer of the visual arts in the 1880s. She is best known for her seminal portrait of the Finnish artist Venny Soldan-Aho along with her group portrait entitled Vännerna.

Hanna Pauli was the youngest daughter of the music publisher Abraham Hirsch and Pauline Meyerson. She grew up in Gamla stan (the old town), in Stockholm, and she used to spend her summers on Dalarö. The family belonged to the upper middle-class of society and mainly socialised within the Jewish circles of Stockholm. Abraham Hirsch was one of the founders of Sällskapet Israelitiska Intressen (society for Israelite interests) which campaigned on behalf of Jewish political emancipation and a reformed Judaism. He owned his own music publishing company and held a position of influence within public musical life. Hanna Pauli was fortunate enough to be one of a group of young girls who received private tuition from Ellen Key during the late 1870s. She and her sister Betty, along with their friends Lisen Bonnier, Anna Thiel, and Emma Zorn, were all taught history, geography, and Swedish literature.

Hanna Pauli’s artistic talents were discovered at an early point in her life. She began to study with August Malmström at the tender age of 12. At that time Malmström was one of the most influential painters in Sweden. He was a professor at Konstakademien (the academy of art), and during the 1870s he ran a private art school in his home, which also served as a studio, at Näckströmsgata 3 in Stockholm. He had many female students, including Eva Bonnier, Karin Larsson, Anna Cramér, Anna Nordlander, Elisabeth Keyser, and the author Anne Charlotte Leffler. Qvinliga afdelningen (the women’s section) at Konstakademien had opened in 1864 and – in what was quite a unique situation – the female students were permitted to make use of nude models of both sexes. Hanna Pauli came to be considered to be one of the most promising students and when the 150th anniversary of Konstakademien was celebrated in 1885 she was awarded one of the early ducal medals for her painting entitled Vid Lampan.

Hanna Pauli moved to Paris in 1885. There she studied at the Académie Colarossi. Her paintings fell within the school of realism and she mainly produced portraits and paintings en plein air. In 1887 her epoch-making and complex portrait of her Finnish studio mate, Venny Soldan, was accepted for display at the Paris salon. Hanna Pauli’s portrait of her friend and fellow female artist was painted from an ambivalent perspective. On the one hand, she has portrayed Venny Soldan as a foreign entity, as viewed by the patriarchy which treated female artists as ‘beyond’ civilisation. The subject is portrayed as classless, raw, and primitive, seated on the floor in dirty and simple attire. To see a young bourgeois woman brazenly seated in such an ungraceful position was a shock for many contemporary viewers. On the other hand, she has painted her studio mate as a subject free of self-consciousness. This is a woman whose strength of presence meets the gaze of the viewer with a sense of immediacy. This was ‘den Nya Kvinnan’ (the new woman) captured mid-formation.

That same year Hanna Pauli also painted Frukostdags, defined by a lyrical en plein air style of painting, permeated by light, like a snapshot of reality, as the bourgeois dining room has been shifted out into nature. By now she was a recognised artist, and a member of the opposition movement called Konstnärsförbundet (the artists’ association), who exhibited her work regularly and received a lot of attention from the critics.

In the autumn of 1887 Hanna Pauli married the artist Georg Pauli. They moved to Italy but, following a year spent in Rome, they settled in Stockholm. Many of her contemporaries found it impossible to merge being an professional artist with being a wife, but Hanna Pauli successfully enjoyed both. She and George had three children together and, despite the sizable household and entertaining duties, she managed to keep her career going. Her choice of Georg Pauli as husband was a conscious one: by marrying him she had guaranteed her ability to continue painting. Both of them were independently wealthy and could thus afford to pay for home help.

Hanna Pauli was influenced by the 1890s art movement known as symbolism. However, in contrast to her male associates who were inspired by national romanticism and tended to paint landscapes, she retained her focus on painting people. This included her symbolist portrait of Verner von Heidenstam as Hans Alienus from 1896.

The Pauli family lived in Gothenburg during the period of 1893–1897 and the Pauli couple taught at the art school there. This was a difficult period for Hanna Pauli. Her flow of commissions had reduced to a trickle and her artwork was not often discussed. Around the turn of the 1900s the family returned to live in Stockholm, where they became actively involved in the capital city’s cultural life. Hanna Pauli became known as a witty and lively socialite. Despite possessing an active intellect she opted to hide her talent behind an easy-going façade.

In the early 1900s Hanna Pauli painted bourgeois interiors and social activities which were focused in the living room. She spent several years working on the group portrait entitled Vännerna. Ellen Key is positioned in the centre of the image, reading aloud to her friends in Sällskapet Juntan (Junta society), saturated in the reddish-gold light given off by the evening lamp. Hanna Pauli takes the position of an observer. The names of those portrayed reveal how closely the cultural elite were tied to the financial elite and how adept they were at self-promotion.

Hanna Pauli held her first solo exhibition in 1923. A great number of family paintings were shown for the first time there. Her artistic output increased again following the exhibition and she completed an entire series of remarkable self-portraits. She worked as a portraitist by commission throughout her productive life. At the time of her death she had been professionally active for almost six decades.

Hanna Pauli died in Solna in 1940. She has had a street named after her in Fruängen. 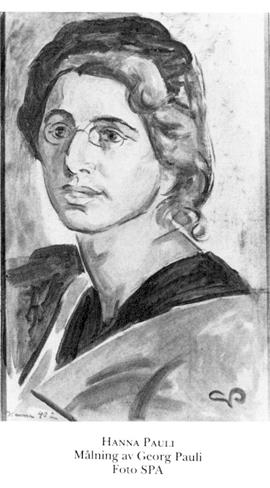