Hanna Odhner was born Johanna Maria Stenberij in 1849. She grew up on her parents’ farm in Välsta near Tungelsta i Västerhaninge south of Stockholm. Her father Herman Stenberij was a surveyor who grew up in Stockholm in a family with Finnish roots and who had studied at Uppsala University. Her mother Elfrida, née Carlbeck, was a dean’s daughter from Berg parish in the province of Västergötland. Several deaths occurred in the family when Hanna Odhner was only little, which were to mark her growing up. Her twin sister died when she was only two weeks old. Her father died suddenly at the early age of 32 with volvulus when she was only two years old. Her mother bore a daughter three months later who died at the age of six after a period of illness. Her mother’s unmarried sister Emanuella Carlbeck moved in to help with the household and bringing up the only remaining daughter. She stayed with them for seven years.

Even though not much is known about Hanna Odhner’s earliest education, more than that it was a matter of private tuition, her aunt clearly played a part. They were probably also helped a great deal by her father’s relatives in Stockholm. Hanna Odhner and her mother lived for long periods in the city and seem to have had an intensive social life now and then, in which they came in contact with many well-known persons belonging to the cultural and intellectual elite of the time. One important relative was her considerably older cousin Johan Wilhelm Smitt, a well-known man in finance and industry. Another cousin was Hulda Sohlman, née Sandeberg, married to August Sohlman, the editor in chief of the major Swedish evening newspaper Aftonbladet. Hanna Odhner socialised a good deal in the Sohlman home and was a close friend of the eldest daughter Signe Sohlman. During the period 1866—1870, both girls took part in the so-called Rossanderska course, a privately organised educational enterprise in natural sciences for women, run in Stockholm by the two mathematically gifted sisters Alida and Jenny Rossander. As student comrades they had among others Ellen Key. Another person with whom Hanna Odhner came into contact via the Sohlmans was the author Josefina Wettergrund.

Like her aunt Emanuella Carlbeck, Hanna Odhner and her mother joined the Baptist congregation in Stockholm and in 1861 they were baptised by the founder of the Svenska Baptistsamfundet, Anders Wiberg. It was probably via the preacher and newspaper man Adolf Drake that they came in contact with baptism; he was a cousin of Hanna Odhner’s father and the Drakes belonged to the closest circle of the family. Her mother received frequent visits by preachers in her home and they both participated actively in the Baptist congregation’s activities in Stockholm.

For several years during the 1870s, Hanna Odhner was active as a translator, mainly from English. How extensive this translation enterprise became, how many years it carried on and how she had acquired her good language knowledge and skills are not known. She seems mainly to have worked for a publishing company founded by yet another central person in Stockholm’s Baptist circles: the preacher and publisher Per Palmqvist. For Palmqvist’s publishing company she translated among other things the preachings of the English Baptist preacher Charles Spurgeon. Hanna Odhner remained officially a Baptist until 1894.

Her aunt Emanuella Carlbeck eventually moved back to Västergötland to take care of the son of another sister. Her engagement in his care, since he had an intellectual disability, resulted in the founding of the first institution for the care of intellectually disabled persons in Sweden and Emanuella Carlbeck is therefore considered a pioneer in this field. One of those who helped her was Hanna Odhner. During the 1870s, she worked now and then as an assistant to her aunt in Johannesberg outside Mariestad and they also travelled to Denmark to study the care given there. There were clearly hopes that she would take over and continue her aunt’s work, but that was not to be the case. A long time afterwards, in 1903, Hanna Odhner wrote a little biography of her aunt: Emanuella Carlbeck. Spridda drag ur hennes lif och verksamhet. Samlade af H–a O. The intellectually disabled boy for whom Emanuella Carlbeck cared was the son of Hanna Odhner’s maternal aunt Efraima Odhner. She had another son, Herman Odhner and the two cousins Hanna and Herman became very good friends early on. When she was 26 and he was 22, they became engaged.

Through relatives, Hanna Odhner had come into contact with the folk high school idea and the Grundtvig ideology and become enthusiastic. Also, August Sohlman was a well-known advocate of folk high schools. Fairly soon, Herman Odhner also became interested, partly after reading a little Danish pamphlet he had been given by his fiancée: Om Hans, som kom till folkhögskolan, in 1883. He decided to break off his academic studies in Uppsala to become a folk high school teacher instead. In the summer of 1878, they were married, and Hanna Odhner moved to Bie folk high school (currently Åsa folk high school) outside Katrineholm, where her husband had been appointed to a teaching post. Three years later, he was appointed principal for Lunnevad folk high school in Sjögestad south of Linköping, a post he held for 34 years until 1915. When Hanna Odhner came to Lunnevad, her eldest daughter was already born and two more children were born later on.

At the folk high school, the traditional gender roles in their marriage were also the basis of the couple’s professional roles. The border between work and private life was diffuse. While her husband had the overall responsibility and taught theoretical subjects to the male pupils during the winter courses, Hanna Odhner was expected to take a housewife’s responsibility not only for her own small family but also for the whole folk high school. Most of the teachers and pupils lived at the school and took their meals there. The responsibility for food and the pupils’ hostel therefore constituted a comprehensive assignment. One central idea in the folk high school movement was to create a family-like environment at the school, with educative conversations, socials and other activities during the evenings and weekends, as part of being together. Hanna Odhner had to take great responsibility here too, and was expected also to help those who were in special need of comfort, encouragement, support or healthcare. When Hanna Odhner and her husband came to Lunnevad there were no courses as yet for women. Together they therefore started a summer course for women in 1883. It was supplemented with a housekeeping course in 1908. She had to take over the overall responsibility for those women’s courses and kept that responsibility until 1913, two years before her husband resigned as principal. She also taught handicrafts, housekeeping, healthcare, childcare and the history of literature during all the years she was there.

The wives of principals at folk high schools around the turn of the century 1900 were already known to their contemporaries as ” folk high school mothers” for the vital role they had as housemothers at their schools and for the development of the summer courses for women. The goal of the women’s education project was firstly a ”housewifely” training that communicated knowledge and skills suitable for working in one’s own home or that of others. Hanna Odhner, Hedvig Holmström at Hvilans folk high school and Cecilia Bååth-Holmberg at Tärna folk high school are the most important names in the first generation of folk high school housemothers. Hanna Odhner was however not a person to play an active role in public life, for example at the Nordic and national folk high school meetings. She never developed her personal ideas on pedagogical issues in writing either, apart from one instance just before her death. In a brief ”testament” that Ingeborg Holmström-Vifell, one of the next generations of folk high school housemothers was given the assignment of distributing, Hanna Odhner gave to understand that she considered that textile handicrafts had been permitted to take up far too much time in the women’s courses at the cost of other subjects that were closer to the folk high school’s proper assignment and fundamental idea.

Hanna Odhner enjoyed writing occasional verse that was performed, often by her husband, at formal events. Some of her verses have been published, among others ”Till qvinnan” (To Woman) published for the first time in Idun in 1888. She also translated several Danish and Norwegian songs that were popular in folk high school circles. Some of them are published in Malin Holmström-Ingers’ Den svenska sången in 1917, and in other song books used by folk high schools all around the country.

Hanna Odhner moved in 1915 to Grythyttan in the province of Närke, where her husband had received a new appointment as an accountant at Loka brunn since he had resigned from Lunnevad folk high school. In 1922, he finally retired and they then moved to their daughter Gärda Segerstedt’s home in Västerås, where they lived until their deaths.

Hanna Odhner died in 1932 at 83 years of age, three months after the death of her husband. She lies buried in Sjögestad in Östergötland. 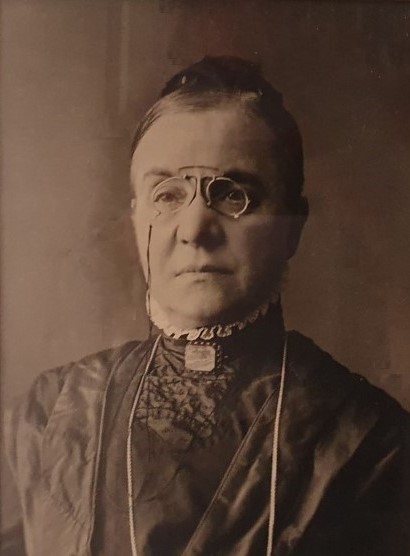