Greta Segerson was active in the communist movement during much of the 1900s. As a courier for the Communist International (Comintern) in Moscow, she travelled several times to Nazi Germany.

Greta Segerson was born in 1914 in Gothenburg. Her mother, Maria Emilia Persson, worked in a bag factory before she met her husband, Robert Ludvig Eriksson, who was a plumber. He was active in the so-called Unghinkarna, a socialist youth movement to the left of social democracy. Greta Segerson’s brother Roland, born in 1913, was also a worker and a convinced communist. Thus she grew up in a home with strong communist ideals and in a city district, Masthugget, that was a red stronghold in which Sweden’s communist party, SKP, was larger than the social democratic party between the two world wars. Masthugget was dominated by shipyard workers, harbour workers and factory workers at SKF. For Greta Segerson, middle-class city districts like Vasastan, Örgryte and Lorensberg were inhabited by “class enemies”.

From an early age, Greta Segerson’s leisure time was filled with work in the communist movement. At the age of six, she joined the party’s children’s guild and when she was ten she became a member of the pioneers. After two years, she was made a leader of the pioneers. She was influenced by her father’s political engagement and he was, according to her, “a communist to 200 per cent”. Her father was outwardly charming but dominant in the home. Greta Segerson was forbidden to spend her time on dancing and amusements. Instead, she had to concentrate completely on working in the communist movement. When the party split up in 1929, her father and the family remained in the Soviet-loyal SKP while the breakaways wanted to form the great revolution according to their own country’s needs and preconditions. Those loyal to the Soviet Union never spoke to the “traitors”, who had formerly been their comrades, again.

Through her father’s contacts, Greta Segerson was accepted at the age of 19 at the Comintern party school in Moscow, the Scandinavian section of the Lenin School. Comintern played an important part in the communist movement. It was from that organisation that communist parties all over the world received their directives on how they should react in various issues. The party school had Finnish teachers who spoke Swedish who had moved to the Soviet Union after the Finnish civil war in 1918 and party comrades from the other Nordic countries who held lectures on Comintern’s standpoints on current affairs. Greta Segerson learned both Russian and German from the comrades she met and she was also given an assumed name to protect her identity. According to her, because of that, her letters home and middle-class newspapers from Sweden were censored. In her spare time, she became involved as a volunteer in some of the big building projects in Moscow, among others the building of the underground. Forty years later, Greta Segerson participated in a study trip to Moscow. When the guide took the group down to the place where the first underground station was built, it has been related that she stepped forward and pointed out the stones that she had helped to cement into the wall. The guide is said to have been speechless.

After the end of her time at the party school, Greta Segerson was offered in 1935 to continue working for Comintern in Moscow, among other things with translation. Her main assignment was however to be trained as a courier, while the boys were trained to participate in anti-fascist resistance activities in various countries. She did however receive some military training, learning among other things to parachute and shoot with a rifle.

As a courier, Greta Segerson travelled via Sweden or Poland to Nazi Germany. She carried with her material from Comintern in double-bottomed trunks that she delivered to people whose identity she did not know, so as not to be able to divulge her contacts if she were to be arrested by the German police. According to her, she looked “young and childish, was blonde and spoke German”. Dressed up in smart clothes, she had to play a fine lady on a tourist journey and she had plenty of cash with her. During 1936, she travelled eight times, mainly to Germany, and even in 1939 she made several trips. On one visit to Berlin, she met a man aged about 25 who was active in the Sturmabteilung, SA. He invited her out to, among other places, Haus Vaterland where the SA people used to meet. He offered her marriage, but she lied that her grandmother was from a Sami family and then he quickly broke off the contact. The SA man had been a good cover and she found it better that he should break off the relationship than that she should need to turn him away, which could have aroused suspicions.

After a lecture in Skåne in southern Sweden on the Soviet Union, Greta Segerson met Bengt Segerson on the train back to Gothenburg. Like several other volunteers in Spain, he was on his way home from the Spanish civil war. They soon started courting and in January 1940 they married and moved into a flat in Masthugget. During the years immediately after their marriage, they met extremely seldom, however. Both were politically engaged and constantly travelling around the country.

The Soviet pact with Nazi Germany in 1939 and the attack on Finland the same year created strong antagonisms within the communist movement in all countries and many party members left the party. In the press, hard campaigns were carried on against SKP and there were discussions at government level about forbidding the party. Active communists, among them Bengt Segerson, were transported to special work camps. In February 1940, the police carried out a raid on a national scale in SKP’s party premises and in private homes. Greta Segerson was at home on the morning the police arrived. They searched the flat and took with them a number of books and minutes from various meetings in which family members had participated.

After Germany’s attack on the Soviet Union and after the German defeat at Stalingrad in 1943, attitudes became more and more positive towards the communists in Sweden. Greta Segerson now helped with among other things refugee aid in Gothenburg along with among others Ingrid Segerstedt Wiberg. With the cold war and the communist take-over of the political power in Czechoslovakia, attitudes to the party deteriorated however.

For a long time, Greta Segerson held onto the Soviet version of the communist ideology, but gradually her and Bengt’s understanding underwent a change. They realised that they had been naïve in their view of the Soviet Union and were of the opinion that the wrongs disclosed in the country during the 1980s were dependent on corruption of the communist ideology. The Swedish secret police, SÄPO, continued however to keep an eye on Greta Segerson. Her SÄPO documentation shows that she was monitored from 1931, when she was 16 years old, until 1994, when she was 80. In 1940, she was described as “a particularly fanatical and trusted communist” and in their register, her participation in political meetings, travels abroad, and relationship to the Soviet Union were all noted. The last item in her documentation is from 1994, and there it is noted that Greta Segerson had held a speech at a 1 May meeting for the Spain volunteers.

In 1942, Greta Segerson was employed as a clerk at the Crisis Committee in Gothenburg, where she remained until the end of the war. After a few years’ participation in the rebuilding of Yugoslavia, she was employed in 1949 at the Gothenburg City Council and after that at the Gothenburg Municipality until her retirement in 1979.

Greta Segerson had an exquisite singing voice and she received a good deal of response not least for her performances of Russian songs at association meetings, staff parties and on study trips. In 2006 she had however tired of singing at the Municipality’s pensioners’ club Christmas parties and so she performed instead a rap interpretation of the famous Gothenburg singer-songwriter Lasse Dahlqvist’s song “Jolly Bob”, combined with a kind of Indian dance. She was then 92 years of age. The success was immediate and after the local TV news had shown her bravura number, she became a national celebrity. However, she did not like the “downside of being a celebrity”. Being recognised wherever she went was not her ambition. During her life-long political commitment, she had chosen communist groundwork at the basic level over becoming a member of boards and municipal committees.

Greta Segerson died in 2016 after a period of illness, at 102 years of age. Right up to the very last she was committed to life, and her friends read aloud from books that she had particularly asked for. 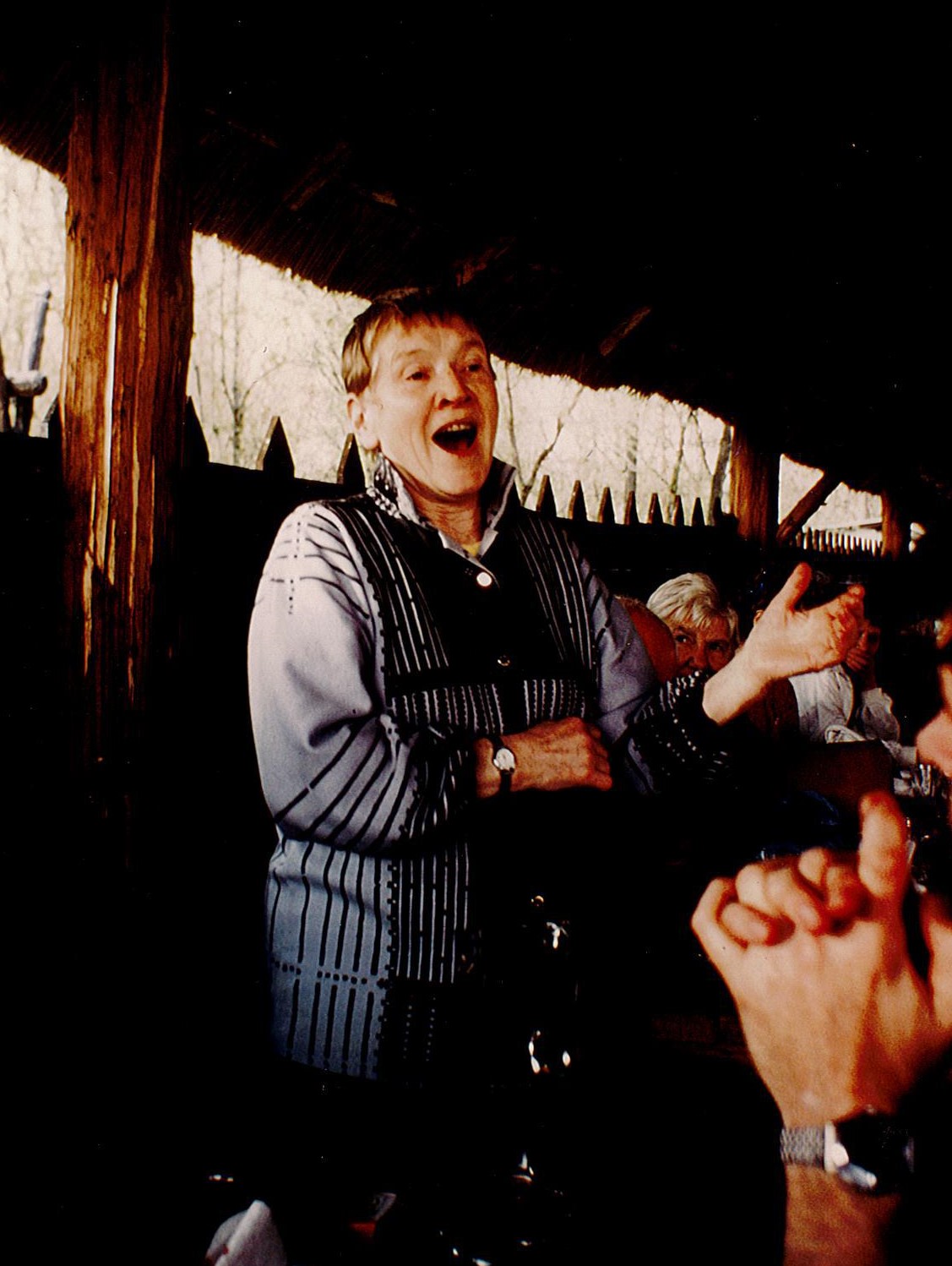