Gerda Höglund was an artist. She was one of the few female painters of sacred art active around the turn of the twentieth century.

Gerda Höglund was born in 1878. She came from a well-to-do bourgeois Stockholm family. She was the daughter of Clara and Otto Höglund. She had an older brother named Sven and later on a younger brother, Nils, joined the family. Her father was a wholesale merchant who had gained a PhD and was also a well-known politician and parliamentarian in Stockholm. Her mother Clara, née Werner, was artistically inclined and sat on the board of Handarbetets Vänner.

Gerda Höglund’s education began at Anna Sandström’s school for girls. She started her artistic training at Kerstin Cardon’s painting school to great encouragement from her parents. She then continued her art studies at Académie Julian in Paris where, during the years of 1900–1904, she studied with the well-known historical painter Jean-Paul Laurens. During this time she also came to know other Swedish art students in Paris, such as the sculptor Carl Eldh and the artist Matilda Båysen. After completing her time in the French capital Gerda Höglund went on several further study visits to France and to Germany, Italy and Great Britain. An interview published in the journal Idun in 1928 reveals that Gerda Höglund’s role model was Leonardo da Vinci and that she would read his Traité de la peinture every day. This interview also revealed that Gerda Höglund felt a great deal of gratitude towards Gustaf Cederström. He had occupied the studio next door to hers for several years and they frequently visited each other.

During the early stages of her career Gerda Höglund made a name for herself as a portrait and landscape painter. She made her debut at the Paris spring salon in 1905 at which two of her portraits were exhibited. One of these portrayed her mother, Clara Höglund, and won a lot of favourable attention. Her debut was written up in the press as very promising in nature: “A delicate sense for colour, solid drawing technique and fine character analysis make these portraits outstanding pieces”. She was given the honour of appearing at the Paris spring salon another two times. In 1908 her sensitive portrait of a lady entitled September was shown, alongside work by Anders Zorn and Carl Eldh, and in 1910 she submitted two delicate landscapes portraying the Stockholm archipelago.

Gerda Höglund, along with Tyra Kleen and Ida von Schulzenheim amongst others, was a member of the female artists’ association Föreningen Svenska Konstnärinnor (FSK) and she displayed her work at several exhibitions organised by that association. At the first exhibition in Stockholm, in 1911, Gerda Höglund displayed Porträtt af M:me B, a French woman she had come to know during her final year in Paris. Gerda Höglund’s work was also represented at FSK exhibitions in Lund in 1912, in Vienna in 1913, in Malmö in 1914 and at Liljevalchs gallery in 1917 and in 1927. The only solo exhibition she ever held was at Uddevalla museum (now Bohusläns Museum) in 1945. There she submitted paintings of a religious nature, portraits, landscapes and pictures of flowers – both in oils and in watercolours.

It appears that Gerda Höglund began her career as a painter of sacred art in 1913 purely by accident. An article published in Idun in 1913 reveals that it was by chance that she was asked to paint an altar piece for the Swedish church in Johannesburg, South Africa. The painting’s motif is Christ and two of his disciples standing in the door to Emmaus. Gerda Höglund donated the altar piece as a gift to the congregation during the same period that Queen Victoria donated an altar cloth and an antependium. Gerda Höglund had already painted religious motifs in Paris during the time she was a student there and she thus developed a strong personal attraction to sacred art, leading her to carry on creating such art. Further, she was also personally a deeply religious individual. In one of her letters to her friend Elin sundberg in 1942 she writes: “God’s plans for us are mysterious. To me prayer is a haven when my inner world darkens – and God hears my prayers. I often get answered in the most remarkable ways and have reason to be deeply grateful”.

Gerda Höglund never married, indeed she was married to her art. She was extremely devoted to her calling, worked hard and at times did not even have time to maintain contact with her friends and acquaintances. Her mother, Clara Höglund, took care of this on her behalf by writing letters to her daughters’ friends: “Gerda remains just as interested in and happy with her work”.

Gerda Höglund produced altar pieces for a range of churches during a 40 year period – the vast majority of them can be seen in Luleå diocese in Norrland, but also in Sörmland county, Jönköping county, and in the seaman’s church in Hartlepool, England. Gerda Höglund took an interest in Norrland at an early stage of her life. The congregations there were poor and as Gerda Höglund was not financially dependent on the income she could have earned from the altar pieces she opted to donate these works instead. She would contact the church councils herself and offer to work for free to produce an altar piece. When the donation proposal was accepted she would often seek out the architect responsible for designing the church in question in order to get a better idea of the colour scheme and the dimensions involved so that she could create a painting which was well-suited to the space in question. Once she had completed her altar pieces Gerda Höglund would deliver them herself to the recipient church in order to see it in place and sometimes she would even undertake minor adjustments to the work in the church.

Gerda Höglund donated an altar piece portraying the risen Christ to Glommersträsk church in 1928. In Idun she describes how “the composition came to her whilst she was listening to a Bach symphony”. A letter which her mother Clara Höglund sent to Gerda Höglund’s friend Elin Sundberg, dated September 1928, shows that, during the ceremonial inauguration of the work, Gerda Höglund was able with a great sense of duty to speak to the congregation from the church choir and received great gratitude.

Gerda Höglund was politically active and took great interest in the burning issues of her time. During the First and the Second World Wars she was active on behalf of women in war-torn Finland. In 1918 she, along with 21 other Swedish women – including Selma Lagerlöf, Ebba von Eckermann and Lydia Wahlström – composed a petition to the prime minister seeking to help their Finnish sisters who “along with their children are no longer safe in their own homes”.

A frequently recurring motif in Gerda Höglund’s sacred art is Christ depicted as a teacher speaking to his disciples and the surrounding crowds at prayer. Another of her trademark pieces was the enthroned Madonna with child and Gerda Höglund’s sensitivity to the issues of her day are reflected in her work. In a letter to Elin Sundberg, written as the Second World War raged in 1941, Gerda Höglund states “Recently I have been working on a depiction of Christ at prayer. Christ prays: “Father, forgive them for they know not what they do”. This thought is the basis of the painting” and “Maria holds the child in close and looks out at the world, feeling that she must protect the child”.

In 1932 Gerda Höglund was awarded the royal Illis quorum medal of the fifth degree. This merit was given in recognition of all the work she had done in disseminating sacred art. She painted her last altar piece in the early 1950s for Umnäs church. By then she had begun to suffer from eye problems which eventually left her completely blind. Gerda Höglund’s life work can be seen at 20 different churches. The following list is a selection and includes the year of creation: Burträsk, 1917, Nysätra, 1921, Bygdsiljum, 1924, Muodoslompolo, 1926, Kvikkjokk, 1926, Glommersträsk, 1928, Seskarö, 1929, Fatmomakke, 1931, and Vittangi, 1949. Her work is also to be seen at the Royal Swedish Academy of Music in Stockholm where a portrait of a former teacher, Eugenie Claeson, hangs. Gerda Höglund painted and donated this portrait in 1907. Stockholms stadshus (city hall) also has one of her pieces, a portrait of the former porter A G Ericsson and of the statistician Josef Guinchard.

Gerda Höglund died in 1973, aged 95. She is buried in the family grave at Norra begravningsplatsen (the Northern Cemetery) in Solna. 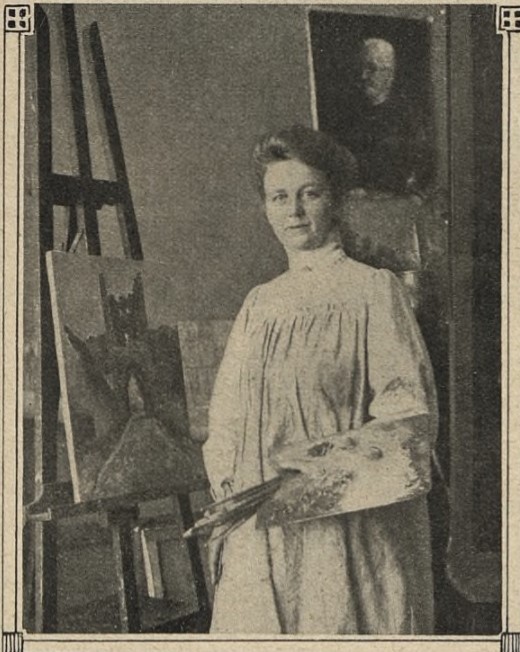