Frigga Carlberg was a jack-of-all-trades who was imbued with a strong sense of social empathy. She wrote plays and composed polemical articles for the daily press whilst also engaging in charitable works and child welfare efforts. She was also a key personality within the women’s movement and an active suffragette. She was both a controversial and a contentious woman.

Frigga Carlberg was born in August 1851 in Falkenberg. Her home was a wealthy one. Her father, Tobias Lundgren, was a master cobbler who had earned his way up the social ladder. He purchased a tannery and subsequently became a leather manufacturer. Her mother, Anna Elisabeth, was her father’s second wife. They had eight children together, although two of them died in infancy. Frigga Carlberg’s mother took over the running of the Lundgren leather manufactory on the death of her husband until Daniel Lundgren, one of her sons, succeeded her in 1883.

Frigga Carlberg attended the Halmstad girls’ school from 1867–1869. She then worked as a private tutor from 1871–1874. Frigga Carlberg married postmaster Andreas Carlberg and in 1876 the couple moved to Gothenburg. They had two children, named Ester and Gösta. Gösta only lived until his twentieth year, dying of tuberculosis. Ester eventually married Sven Brisman, an economist with whom she established a family.

Frigga Carlberg became known for her extensive social and political activism. She was a firebrand who wanted to eradicate the poverty, misery, and suffering which primarily impacted on women and children. She was a willing participant in the wave of social activism which emerged during the 1880s on behalf of the vulnerable elements of society. In 1892 she became the chair of Sällskapet Myrorna (the Myrorna society), which was a break-away group of the old ‘Kvinnoföreningen’ (women’s society). Myrorna’s remit included establishing and running homes for poor and orphaned children. In total Myrorna were responsible for running seven children’s homes for children who did not have parents who could care for them. These children’s homes followed a pedagogy which differed from earlier attempts at child welfare institutions by seeking to allow for each child’s individual development. Further to these seven children’s homes Myrorna also ran a particular children’s home for those whose parents were suffering from tuberculosis. However, the destitution and need was impossible to meet – and resources were not adequate. In a letter from Frigga Carlberg to Elin Wägner her emotional empathy for the vulnerable in society was evident. She believed that the church and the council did not do enough on behalf of poor and starving children.

Frigga Carlberg served as secretary of Förstamajblommans centralkommitté (the central committee of the First of May flower organisation) from 1907–1915. This meant that she was involved in setting up a summer visit to the countryside for needy city children. The Östad summer camp was set up in 1917 and Frigga Carlberg was one of the initiators behind the plan to send around 20 children there, an enterprise which was based on voluntary donations and other driving forces who were willing to provide their services.

This socio-political engagement made the issue of women’s political suffrage even more relevant. Poor and starving children were suffering and society would be better able to care for these vulnerable individuals if women were allowed to participate in the decision-making process. Thus in 1902 Frigga Carlberg organised a suffragette society in Gothenburg and the following year she was one of twelve women who set up the national organisation called Landsföreningen för kvinnans politiska rösträtt (the national association for women’s suffrage). Frigga Carlberg also sat on the board of Liberala valmansföreningen (the Liberal constituency association) in Gothenburg from 1907–1914.

Frigga Carlberg was a liberal and was influenced by the social thinking represented in British liberal circles. She herself asserted that the Scottish historian and author Thomas Carlyle was her source of spiritual inspiration. It was from him that she took her own life motto: “For the sake of justice”.

Alongside this social activism Frigga Carlberg also produced a considerable number of written pieces, both literary and political in nature. Her debut novel, entitled Vårlöften and published in 1903, portrays the harsh living conditions of society’s poor women. Despite the burdensome and difficult aspects to their lives there were nevertheless signs of a better future. However, this belief in a brighter future was not an obvious interpretation of the novel according to the reviewer in the Dagens Nyheter newspaper who wrote, on 19 December 1903: “Giving this story the title of Spring Promises is either a form of irony or of deep sadness.”

Frigga Carlberg also penned serious dramas and light-hearted plays which often had a satirical aspect to them. In 1916 she released her play called Statsministerns döttrar and two years later her socio-political novel, För rättfärdighets skull, was published. The story is told using a narrator’s voice and despite the lead character’s name being Märta it is easy to trace within it elements of Frigga Carlberg’s own experiences of working with poor, defenceless women and children and with those who like herself were in a position to help. She also composed similarly-toned articles for the press and these contributions were widely published, in organs such as Dagny, Göteborgs Handels- och Sjöfarts-Tidning, and in Svensk Damtidning. Further to her own works Frigga Carlberg also translated Charlotte Perkins Gilman’s novel, The Home: its work and influence (Hemmet: dess verksamhet och inflytande) into Swedish, published in 1907.

Frigga Carlberg was a highly contentious woman and she was one of the most radical members of the women’s suffrage movement. She was not just motivated by the lack of women’s rights but in fact by all kinds of injustices. She campaigned for equal rights for illegitimately-born children, a belief which was rejected within the bourgeois welfare organisations. Frigga Carlberg believed that men should also assume responsibility for the children they had helped bring into the world and that this would have been confirmed by more expansive inheritance rights. She sympathised with the strikers during the general strike of 1909 and took on the responsibility of inviting the suffragette Sylvia Pankhurst to give a speech. On Thursday 2 October 1913 the auditorium of the Gothenburg college was jam-packed. When Frigga Carlberg introduced Sylvia Pankhurst she initially emphasised that this talk was the result of a private initiative and it was not intended to be an instruction as to how to undertake political efforts on behalf of women’s rights. The differences between Sweden and Great Britain were too great. In Sweden the second chamber of parliament was supportive of women’s suffrage and the government was similarly favourably inclined.

Frigga Carlberg was sometimes subject to persecution campaigns by the press, ostensibly directed towards the seven children’s homes which she was responsible for. The alternating calumnies printed about her as well as the extensive published esteem she enjoyed served as a basis for the plays, short stories, and burlesque pieces that she wrote. She combined humour with political gravity in her work.

Frigga Carlberg was an activist in terms of both her literary efforts and her deeds. In response to the need which arose during the revolutionary year of 1917 she organised feeding stations for those in need whilst also writing about social injustice. Indeed the efforts in Gothenburg on behalf of women’s suffrage took on an active, creative, confrontational, and effective aspect thanks to Frigga Carlberg’s involvement.

Frigga Carlberg died in Stockholm in October 1925. One of the obituaries printed following her death notes: “widow of postmaster Andreas Carlberg, sorely missed by a daughter married to Professor Sven Brisman”. The fact that her daughter remained anonymous whilst both the title and name of her son-in-law were published reveals a lot about gender norms in Sweden in the 1920s and also reveals that Frigga Carlberg’s struggle urgently needed to continue. 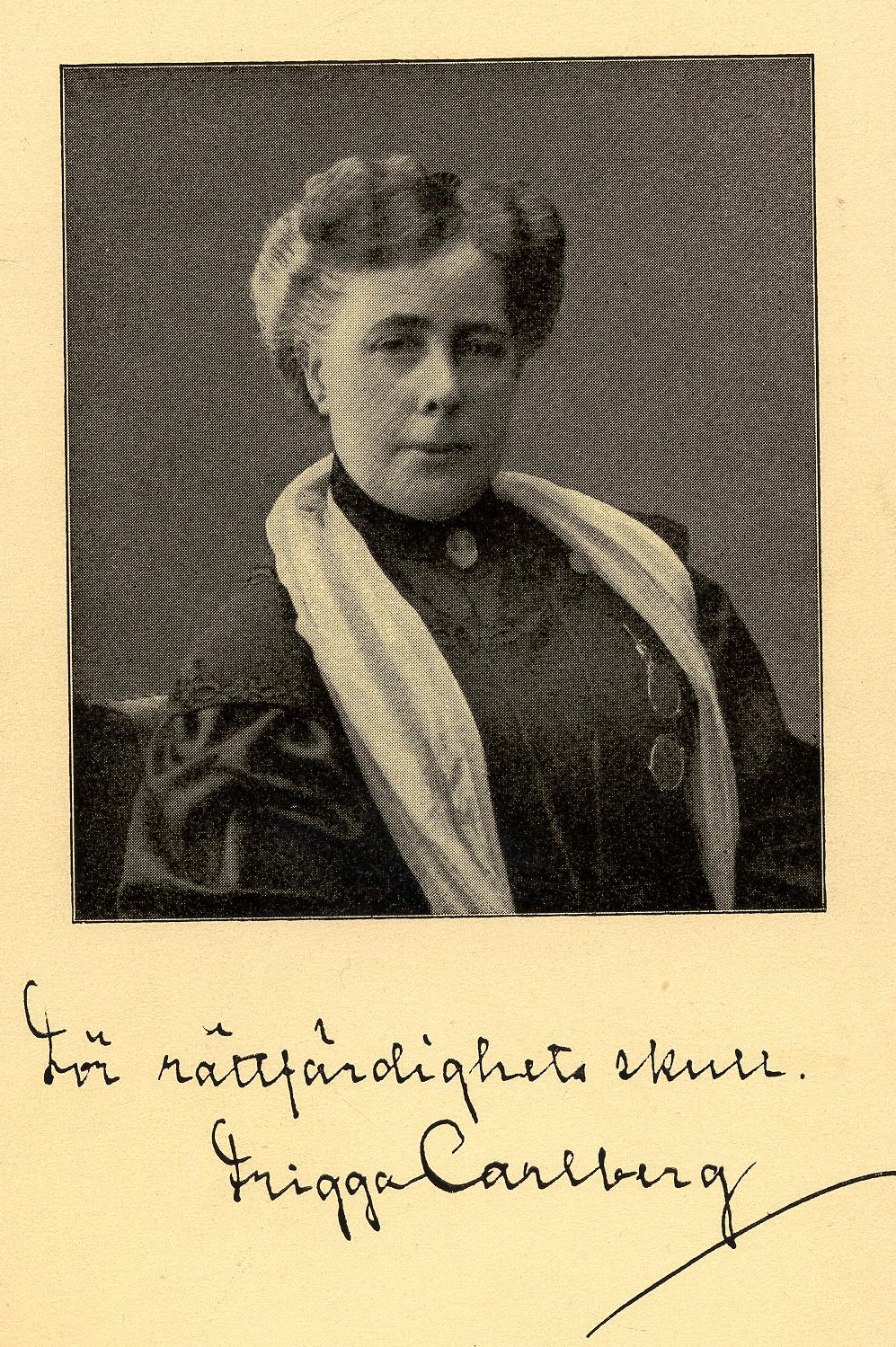