Fredrika Stenhammar was an opera singer at the Royal Theatre (Kungliga Teatern, nowadays Kungliga Operan) during the second half of the 1800s.

Fredrika Stenhammar was born Fredrika Andrée in 1836 in Visby. She was the eldest of three children born to provincial physician Andreas Andrée and Ebehardina Lovisa, née Lyth. Andreas Andrée was a politically convinced liberal and in contrast to the general view of bringing up girls in the 1830s – which meant that their ”talents” were to be developed with the aim of finding a suitable husband and being a beautiful woman by his side – Andreas Andrée thought that young girls ought to be educated for a profession. The job market was in principle limited for girls from the higher social classes to being a governess, housekeeper or going on stage, although the latter had strong overtones of being linked to prostitution. Despite that, he allowed Fredrika Stenhammar to train as a singer. She had absolute pitch and was first taught by her father and later by cathedral organist Wilhelm Söhrling.

In the spring of 1851, Andreas Andrée visited the world exhibition in London. Once back home, he decided that his daughter should study music in Leipzig, at the foremost conservatory in Europe at that time. In Stockholm there was Operaskolan which for some reason did not suit Andreas Andrée, and the conservatory in Stockholm first accepted women after 1855. Between the autumn of 1851 and the spring of 1853, Fredrika Stenhammar studied piano, harmony and composition at the conservatory in Leipzig as well as voice for Madame Schäfer. She continued studying for Madame Schäfer at an opera school until the autumn of 1854. During the winter of 1854—1855, she made a brief guest appearance at the opera in Dessau and also in Kassel and Leipzig. In June 1855, she made her debut in Stockholm as Lady Harriet in Friedrich von Flotow’s opera Martha.

Between 1855 and 1857, Fredrika Stenhammar was employed at the Royal Theatre in Stockholm and sang some of the great roles, among others the countess in Le Nozze di Figaro, Marie in La Figlia del Reggimento, Agathe in Der Freischütz, Donna Anna in Don Giovanni, and Mathilda in Wilhelm Tell. Her position as a prima donna was however not self-evident. In the autumn of 1855, her role in the opera Martha almost put paid to her career. During the years in Leipzig, she had almost forgotten her Swedish, and on her arrival in Stockholm she spoke Swedish with Gotland dialect and a strong German accent. Her colleagues laughed at her and the rumour of a conspiracy was spread about in the theatre. Despite that, she made a success of the role and her position at the theatre was secured.

However, there were also other problems. Fredrika Stenhammar was trained in the German singing tradition and had an intimate, well-groomed voice, perfect for German romances and German opera. However, she did not sing coloratura very well, which was necessary for the Italian and French operas produced in Stockholm. As early as 1856, she wanted to travel Paris to study French singing techniques, despite being sceptical, and she wrote to her parents: ”I can only become a real coloratura singer at cost to the health of my voice”. Despite this insight, she spent a year in Paris and studied singing and declamation for among others Manuel Garcia’s pupil, Madame Isabelle Bur. She tried after that to be accepted for engagements at the operas in Vienna and Berlin but without success.

In the spring of 1859, Fredrika Stenhammar was back in Stockholm, and from the autumn the following year she sang among other roles Leonore in Giuseppe Verdi’s Il trovatore, Lucia in Gaetano Donizetti’s Lucia di Lammermoor — an opera that demanded a great deal in the way of coloratura singing — and later Gilda in Verdi’s Rigoletto, Margareta in Charles Gounod’s Faust as well as Iphigenia in Christoph Willibald Gluck’s Iphigenia in Aulis. In the summer of 1863, she married Fredrik Stenhammar, also an opera singer and a tenor, but his career was very short. His voice was damaged during his studies in Paris and from 1865 until his death in 1884 he was a customs officer in Stockholm.

Fredrika Stenhammar was really a lyrical soprano, not a dramatic one, which meant that lyrical roles suited her best, not ones requiring coloratura singing. In comparison with Louise Michaëli, who had been trained in coloratura singing at Operaskolan i Stockholm and who after several sojourns abroad had returned to Kungliga Teatern in 1864, many people considered that Fredrika Stenhammar was a colourless singer. Today we would say that the two belonged to different branches of singing: coloratura on the one hand and lyrical, later dramatic, on the other. In 1867, Fredrika Stenhammar tired of the competition. After a schism with the directorate, she left Kungliga Teatern and her family, which had grown with the twins Elsa and Tor, and travelled to Copenhagen with the theatre’s orchestra leader Ludvig Norman and his wife, the violinist Wilhelmina Neruda, to seek her fortune. After six months, she returned to Stockholm. At the same time, Louise Michaëli’s health deteriorated, which led to her leaving the opera in due course.

Fredrika Stenhammar had between 40 to 50 roles in her repertoire, and — in contrast to several of her colleagues — she was positive to the operas of Richard Wagner. During the 1870s, she was most at ease as a Wagner singer. She sang Senta in Der fliegende Holländer in 1870–1872, and her favourite role of Elsa in Lohengrin several times from 1873 onwards. In 1878 she also sang the role of Elisabeth in Tannhäuser at its Swedish premiere.

During the 1870s, Fredrika Stenhammar took on new roles. She continued to sing Mozart, playing the countess in Le Nozze di Figaro and Donna Anna in Don Giovanni. She was also a soloist in Robert Schumann’s Das Paradies und die Peri, with her friend Edvard Grieg conducting. The 1870s were also when she was successful in her performances in Wagner’s operas. When visiting singers like for example Zelia Trebelli or Christina Nilsson came to Kungliga Teatern, it was Fredrika Stenhammar as the prima donna who looked after them. In 1875, she enjoyed performing duets from Giovanni Pergolesi’s Stabat Mater with Zelia Trebelli, and she found it just as enjoyable to pilot Christina Nilsson through the crowds on her visit to Stockholm in 1876.

Despite her successes at Kungliga Teatern, Fredrika Stenhammar was considered to be a better romance singer than opera singer. Her interpretations of her friends August Söderman’s and Halfdan Kjerulf’s songs were superb but they were transcended by her interpretations of Robert Schumann’s songs that were praised for their ”poetical and warm wealth of moods” in Ny Illustrerad Tidning. She had a smooth lyrical sound to her voice and fine voice production, although it was not loud. Her well-trimmed technique and declamatory expression were impressive. Despite her weak health towards the end of the 1870s, she filled in for sick colleagues at short notice and she was very loyal towards her pupils. Some of them, for example Mathilda Grabow and the Norwegians Gina Oselio and Olefine Moe later made careers as singers.

Through her marriage, Fredrika Stenhammar came to belong to a family of great culture. Her husband’s father was the well-known clergyman and member of parliament Christian Stenhammar. His maternal uncle was the then very established composer Adolf Fredrik Lindblad and his brother was the architect and composer Per Ulrik Stenhammar, the father of the composer Wilhelm Stenhammar.

In 1864, Fredrika Stenhammar was elected a member of the Royal Swedish Academy of Music and in 1876 she was awarded the medal Litteris et Artibus.

After Fredrika Stenhammar’s death, her sister Elfrida Andrée, the cathedral organist in Gothenburg, took over the guardianship of the twins Elsa and Tor. Elsa Stenhammar became known at the beginning of the 1900s for her work with the popular Folk Concerts in Gothenburg and her cooperation with her aunt Elfrida Andrée and cousin Wilhelm Stenhammar.

Fredrika Stenhammar died in 1880, at only 44 years of age. She lies buried in the Northern Cemetery in Solna. 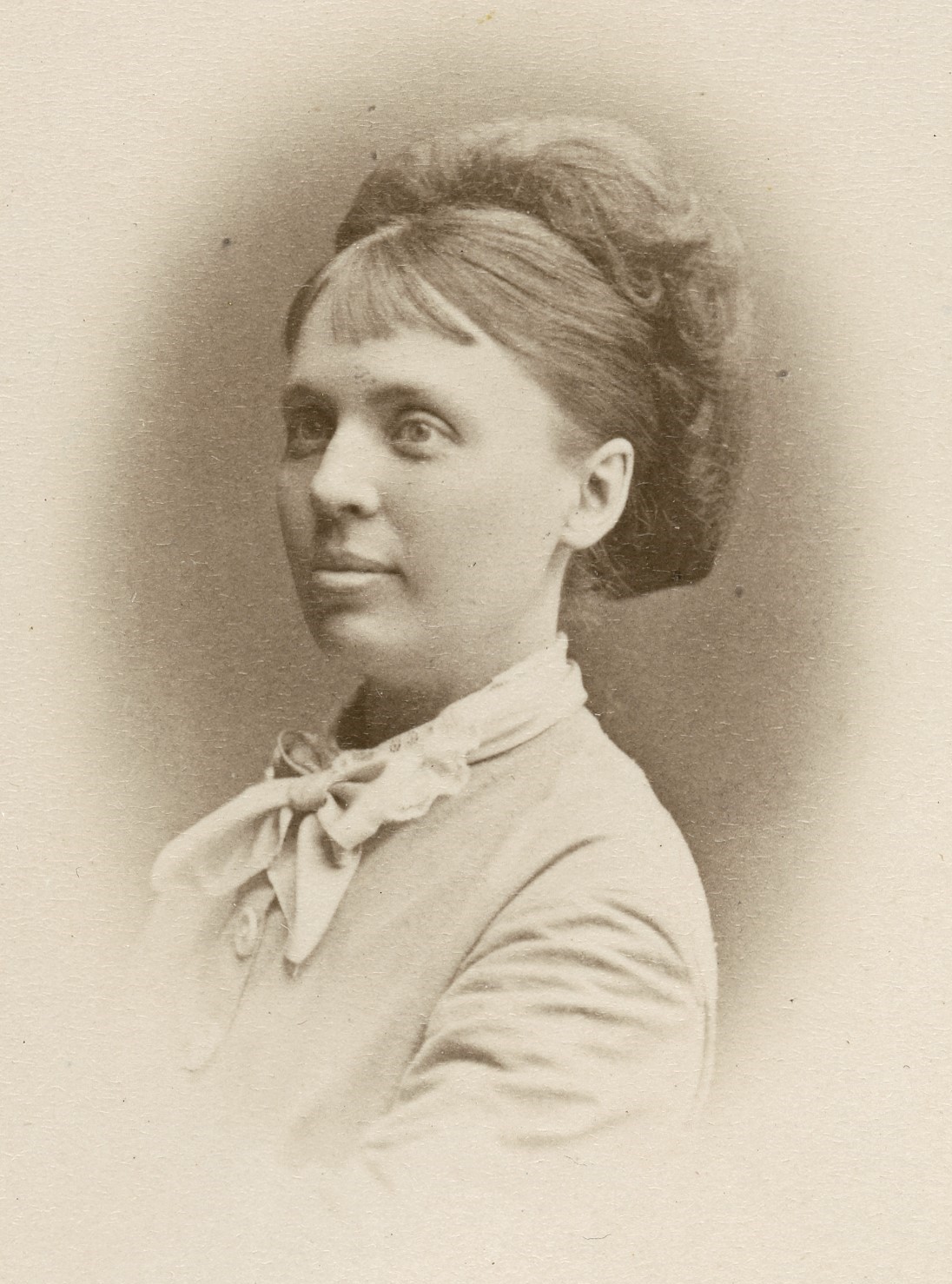