Fredrika Bremer was one of the great women of culture of the 1800s, a celebrity known far beyond the Swedish borders. She was the first Swedish novelist to become a success on the other side of the Atlantic Ocean. She was an opinion former who fought for peace and women’s rights. She was also a traveller who reported on the social and intellectual life in both the “new” and the “old” world.

Both Fredrika’s and her elder sister Charlotte’s life stories reveal fairly uneventful and often unhappy childhoods. Even though no means were spared for their education – a governess, a teacher, a tutor, a games and a drawing master, and a cook were employed – it seems that certainly their early years were loveless and barren. Their parents were strict and distant, and the children’s care was left up to the nurses. The Bremer siblings went cold and hungry in order to be “hardened” and to remain slender and “zephyr-like” like the heroines which their mother Birgitta Charlotta read about in her favourite books.

According to various posthumous notices, Fredrika Bremer appears to have been lively and unruly, but also creative and curious. She would cut curtains apart, study the insides of dolls, and throw things into the fireplace. She found it difficult to “behave” and was dissatisfied with her appearance. She felt her nose was too large and her hairline was too low. But she was also prone to jokes and mischief. She began to write short French verses at an early age and with her sister Charlotte she would rehearse scenes from plays by the pedagogue Mme de Genli. When Charlotte turned 15, the sisters were permitted to read novels and to eat until they were full. They spent two years translating a religious children’s book as a gift for their father, who was so touched that he paid for the printing costs. At various family gatherings the eldest daughters would be presented to perform on the piano and to act out theatre pieces.

When Fredrika was 20 years old the whole family went on a cultural expedition to Germany, Switzerland and France. In anticipation Fredrika began to keep a diary. However, the experience was largely a disappointment. The daughters remained stuck inside the covered coach or inside hotel rooms, the food was strange, and their depressed father was largely in a bad mood. Fredrika suffered from feelings of infuriation and melancholy. “Not for all the world’s treasures and gold, not even for Tegnér’s genius, would I repeat this journey in the same way”, she later wrote in her autobiography. The ensuing years were dismal, but Fredrika fought the melancholy by reading the bible and carrying out active charity work in Årsta.

Her first published written work was the first section of Teckningar utur hvardagslifvet, published anonymously in 1828, which comprised short pieces of prose and poetry. Her younger brother August acted as middleman with the publisher. The second section, published in 1830, included the first section of a novel called Famillen H***, which quickly became a talking point, and when the story was completed in the third section, published in 1831, success was a fait accompli. The family novel, or “domestic novel”, had already gained popularity, especially in England. Now, through Fredrika Bremer’s writing it also found success in Sweden and readers who had previously had to make do with translated adventure and horror stories could now meet contemporary characters, who reminded them of themselves and shared their everyday worries and joys. Fredrika Bremer’s keen eye for human relationships and her aptitude for combining realism, an elevated perspective and humour became an instant hit with the critics as well as the readers.

1891 was a defining year for Fredrika Bremer. In January she received the Swedish Academy’s lesser medal, which brought an end to her anonymity. Through a new-found English friend, Frances Lewin (1804-1888, later von Koch), she became aware of Jeremy Bentham’s “philosophy of utility”, or utilitarianism, which defined the best action to be that which leads to the greatest possible happiness for the greatest number of people. This friendship and intellectual exchange were decisive for Bremer’s later reform work. During a stay in Kristianstad, where her sister Charlotte had moved after her marriage, Fredrika became acquainted with Per Johan Böklin (1796-1867), an educator and rector. The couple formed a lifelong friendship and engaged in a kind of university by correspondence with philosophical and religious discussions. Their relationship became complicated when Böklin suddenly proposed to Bremer. Fredrika rejected him, explaining that her feelings for him could not supersede her calling to be a writer.

Her first novels were soon translated into Danish and shortly thereafter into German. Fredrika’s international success came with the epistolary novel Grannarne from 1837. Mary Howitt’s translation into English from 1842 spread like wildfire across both England and the USA, where Bremer was promoted as “the MISS AUSTIN [sic!] of Sweden”. The American public in particular reacted favourably to Fredrika Bremer. While she was always compared to fellow contemporary female authors like Emilie Carlén and Sophie von Knorring in Sweden, the American critics compared her to the likes of Walter Scott, Charles Dickens, George Sand, Maria Edgeworth and Harriet Beecher Stowe.

Although Fredrika Bremer belonged to a family with resources, after her father’s death in 1830 her circumstances became more restricted, not least since Fredrika’s three years younger brother Claes, who was also her guardian, managed to lose a significant part of the family’s wealth by investing in shares of aquavit. Even though Fredrika Bremer’s success as an author made her somewhat independent she was still officially a minor. After Claes died in 1839 and a beloved cousin took over her guardianship, Fredrika decided to petition the king in order to become fully independent. Bremer subsequently became increasingly engaged in the place of women in Swedish society. In the mid-1800s Sweden was underdeveloped as regards family rights, with the Ärvdabalk (Inheritance law) of 1734 still dictating that “mö af hwad ålder hon wara må, stånde under förmynderskap” (no matter what age a woman may be she must be under guardianship).

During the 1840s Bremer broadened her literary repertoire, including the prehistoric drama Trälinnan, 1840, and the religious book Morgon-väckter, 1842. The following year she published En Dagbok, which of all of Bremer’s novels best stands the test of time with its psychologically realistic account of a mother-daughter relationship and its fine portrayal of Stockholm. In 1844 Bremer was awarded the Swedish Academy’s greater medal. In the year of revolution, 1848, Bremer released the socialist-influenced utopian novel Syskonlif, which attests to her political radicalisation.

Fredrika Bremer started turning more frequently to the USA, which at the time was seen as the land of progress and the future, with radical ideas of freedom and self-determination. However, there was also the paradox of many plantation owners in the southern states continuing to profit from slavery. Bremer’s travels in the USA and Cuba, from 1849 to 1851, became a life-changing experience. As a well-known author Bremer was invited everywhere, to people’s homes, to various institutions such as prisons and mental hospitals, to plantations, to Quaker meetings and to farming collectives. Her letters home to her sister Agathe were myopically detailed and vibrant recordings of her experiences. Her sister was ill and died just before Fredrika returned home. These travel letters were printed in Hemmen i den nya verlden, 1853-1854, and were translated into various languages. Fredrika’s travels also included a visit to London, which in the autumn of 1851 hosted the World’s Fair. Fredrika wrote several perceptive reports from London, which were published in Aftonbladet.

On her return Fredrika Bremer began working on a long planned novel. She herself considered Hertha eller En själs historia, 1856, to be her literary masterpiece. The novel is based on the outspoken Hertha Falk and her fight for freedom, for herself and for her “bound fellow sisters”. Hertha is a depressed agnostic who compares the oppression of women in Sweden to slavery in America. This book was an early contribution to the ongoing contemporary discussion of whether unmarried women should attain the age of majority at the age of 25, a suggested legal reform which became reality a few years later. Bremer escaped the heated debate that followed the release of Hertha by more travels abroad, this time a five-year pilgrimage to Switzerland, Italy, Greece, Turkey and Palestine, which led to yet another travelogue, Lifvet i gamla verlden, 1860-1862. Hertha was eventually followed by the markedly more upbeat novel Fader och Dotter. En skildring ur lifvet, 1858, which did not, however, leave notable traces in the historiography of Swedish literature.

Fredrika Bremer remained insatiably curious throughout her life. She wanted to see everything with her own eyes, speak to people, and learn more about building societies, how to organize life and how to practise religion. She had a vast capacity for work and boundless energy, and built up an impressive contact network. She lived to see several of the issues she campaigned for come to fruition, such as women’s rights to legal self-determination, the abolition of slavery, the establishment of higher female teacher training schools, and a reform of parliamentary representation in Sweden. On Christmas day morning in 1865 she developed a cold which turned into a serious lung infection, and she died peacefully on the morning of New Year’s Eve.

The obituary notices in the world press expressed the impact Fredrika Bremer had had, as an author and as a world traveller. However, a woman who consistently broke the norms of modesty and engaged with the serious issues of the day could not avoid mockery and ridicule. Her American friend Washington Irving’s loving description of Bremer as “everyone’s little aunt” came to sound more patronizing with the passage of time. The reputation of Bremer’s literary input was also marked for a long time by the biographical-psychological tradition, which noted condescending similarities between the novels and the author’s actual life. Birgitta Holm’s study, Fredrika Bremer och den borgerliga romanens födelse, 1981, led to a renewed interest in Fredrika Bremer’s contributions to literary history and women’s literature. Bremer’s name still stands out amongst the pioneers who fought for peace and for women’s rights.

Fredrika Bremer is buried in the church cemetery at Österhaninge. 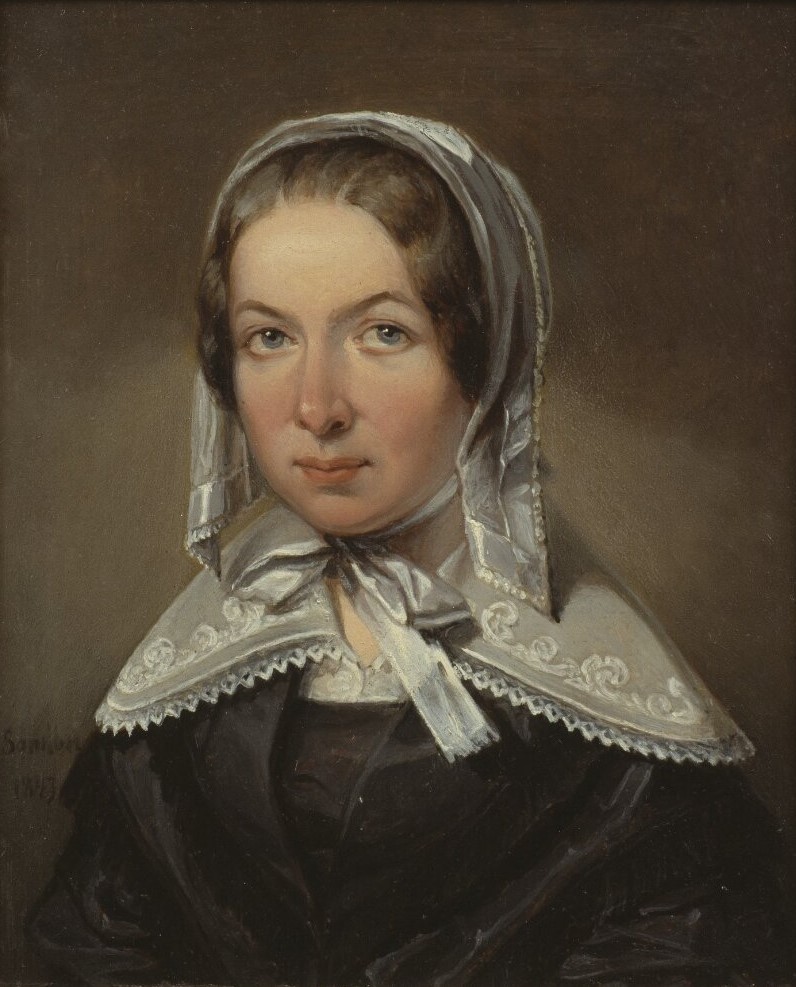