Eva Upmark was a leading member of several conservative women’s organisations at the turn of the twentieth century. Amongst other things she was the chair of Svenska Kvinnors Nationalförbund (Swedish national women’s association), vice-chair of Kvinnornas Uppbåd (a women’s voluntary defence organisation) as well as a board member of Svenska kvinnoföreningen för fosterlandets försvar (Swedish women’s association for the defence of the fatherland).

Eva Upmark was born in 1852. She grew up within a wealthy Stockholm family. Her maternal grandfather, Carl Fredrik Plagemann, had founded Nordstjernan pharmacy in Stockholm, which had subsequently been taken over by her father, Fabian Kindstrand. Eva Upmark’s mother, Dorotée Kindstrand, has been described as a woman who was unusually well-read for her time and who took great interest in issues involving women’s emancipation and education. Eva Upmark’s mother was also responsible for much of her daughter’s formal education. Eva Upmark also attended the Anna Höijer private school where she was, briefly, employed as a teaching assistant.

At the age of 22 Eva Upmark married Gustaf Upmark, an assistant at the then newly-opened National museum and who later went on to become its curator. The couple had known each other for a long time and had met during one of the Kindstrand family’s summer visits to Västerhaninge where Gustaf Upmark’s family resided. Their romantic relationship faced severe opposition from Eva Upmark’s father who viewed Gustaf Upmark as frail, sickly, and poor and thus as an unsuitable suitor for his daughter. It was only after Gustaf Upmark gained an appointment at the National museum that Eva Upmark’s father relented and allowed the marriage to go ahead.

Eva Upmark has been described by her friends and admirers as a conservative civil defence supporter and as politically right-wing, albeit she possessed an even-tempered personality and a positive attitude towards life. Eva Upmark made a name for herself within the Stockholm associations towards the end of the nineteenth century, in part by becoming a founder member of Handarbetets Vänner as well as of Svenska kvinnoföreningen för fosterlandets försvar. Her marital home also served as a well-known gathering place for artists and the literary elite of Stockholm. “To be able to attend a reading evening at the Upmark home was highly sought after”, a writer for the Dagny newspaper stated in an article celebrating Eva Upmark’s 60th birthday. The Upmark couple’s closest friends included Carl Larsson and Gustaf Cederström. The family home contained visible evidence of their social circle in the form of various artworks, including two portraits by Carl Larsson of Gustaf and Eva Upmark, respectively.

Following her husband’s death in 1900 Eva Upmark increased her voluntary work. She took on new board positions for, amongst other things, the Red Cross ladies’ committee (known from 1915 as the Red Cross women’s association), Kronprinsessans centralråd för Landstormens beklädnan och utrustning (Crown Princess’s central council for clothing and arming the homeguard), Svenska Kvinnors Nationalförbund as well as Kvinnornas Uppbåd.

Svenska Kvinnors Nationalförbund was an umbrella organisation of various Swedish women’s associations. One common thread they shared was that they primarily engaged conservative women from the middle and upper classes of Swedish society. Eva Upmark was a central board member for 23 years, firstly as a representative of Svenska kvinnoföreningen för fosterlandets försvar and subsequently as chair during the 1909 to 1921 period. As chair she hosted two international women’s conferences held in Stockholm in 1911 and 1916.

Just like many other conservative women Eva Upmark long opposed the idea of women’s suffrage. She changed her mind in the early 1900s. She did not, however, consider the struggle for women’s political rights to be a priority and in many contexts she decidedly distanced herself from the radical methods which came to be trademarks of the British suffragettes. She was quoted in the Svenska Dagbladet newspaper in 1912 as saying “It is not by breaking windows but by making ourselves indispensable that we will win the right to vote”. The matter of defence was one she held closest to her heart and she did not shy away from being harshly critical of the emerging peace movement.

At the start of the First World War Eva Upmark, along with the then chair of Fredrika-Bremer-Förbundet Agda Montelius and the chair of the Red Cross women’s association Lizinka Dyrssen, set up Kvinnornas Uppbåd. This was a cooperative organisation which aimed at uniting women to make concrete social contributions during the war years, such as by filling in the gaps which arose in the employment market as men were called up for military service. A large number of women’s organisations representing a considerably broad political spectrum became involved in this movement and Eva Upmark took on the role of vice-chair herself.

However, her multiple roles within many associations wore her down and in 1919 she rejected the invitation to be returned to the board of Svenska kvinnoföreningen för fosterlandets försvar, placing the blame on her “age and other demanding association responsibilities” and two years later she resigned as chair of Svenska kvinnors nationalförbund.

Eva Upmark spent her final years residing with her daughter, Dora Lamm. Her son Johan formed a private archive of writings and other texts from her various organisational activities which subsequently, on his death, were donated to the Gothenburg university library Kvinnhistoriska (women’s history) collection.

Eva Upmark died in 1944, aged 92. She is buried at Västerhaninge cemetery. 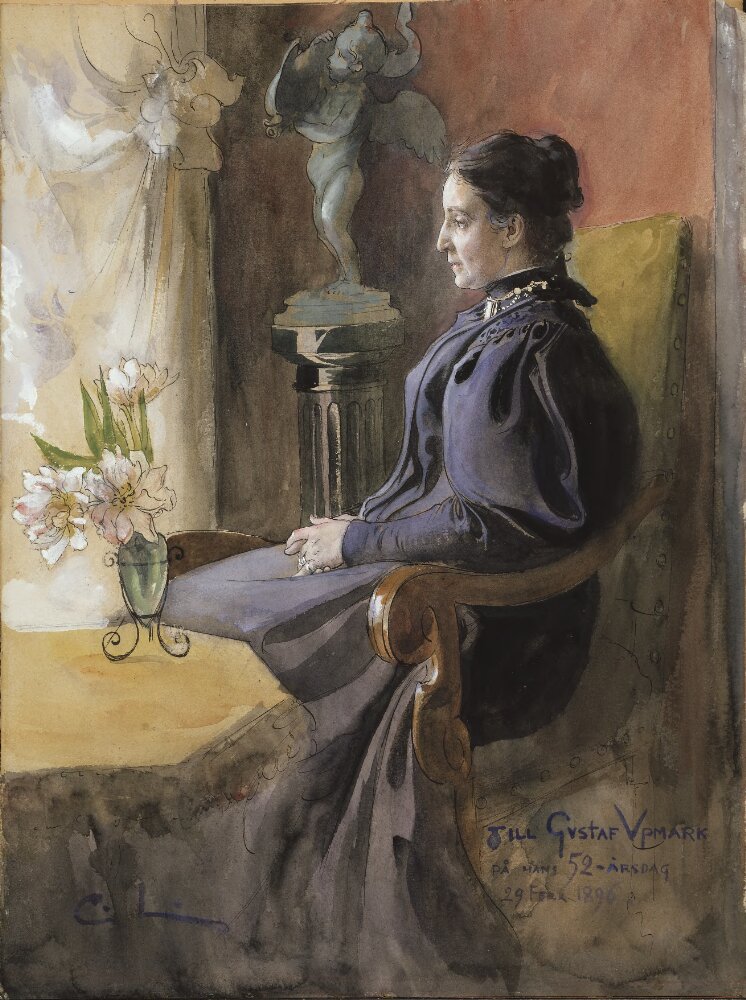