Artist, patron of the arts

Eva Bonnier was a portrait painter and patron, who was largely active during the 1870s and 1880s.

Eva Bonnier was the youngest daughter of Albert and Betty Bonnier, née Rubenson. She grew up in an upper-class home on Norrmalm in Stockholm and spent her summers on Dalarö. The family took extensive trips abroad and was very au fait with the European cultural milieu. Her father was a publisher and her brother Karl Otto Bonnier, the only son, became the designated inheritor of the publishing house. In 1875 Eva Bonnier enrolled at August Malmström’s art school and in 1878 she went on to Konstakademien (Royal Academy of Free Arts) where she studied in the women’s section.

In 1883 Eva Bonnier moved to Paris where she lived until 1889. During the 1880s more than a hundred female artists from the Nordic countries studied in Paris and many of them, like Eva Bonnier, were students at Académie Colarossi. In contrast to the “Parisian artists” of the 1870s who lived in Montmartre, Eva Bonnier and her friends lived in Montparnasse. Initially she lived at a hotel but then she obtained her own studio. Parts of her correspondence to her family in Sweden have been collated and annotated in Pariserbref – konstnären Eva Bonniers brev 1883-1889. The letters offer a new perspective on an era with which many believe themselves to be fully familiar. Eva Bonnier’s vibrant descriptions and critical views provide an insight into the artist’s life and how daily life unfolded within the clique of Nordic artists.

Eva Bonnier was part of the realism movement and produced a large amount of artwork during her years in Paris. She participated in a lot of exhibitions, particularly those held by Konstnärsförbundet (the Swedish artists’ federation), and was frequently reviewed in Sweden. She successfully displayed her work twice at the Paris salon and exhibited at the World’s Fairs in Paris and Chicago. She mainly painted portraits and figures, but also engaged with social themes, particularly depictions of illness. She enjoyed painting interiors with complicated lighting effects. Her psychologically intrusive portrayals of people demonstrate the gender norms of the time along with complex bourgeois family relations. The private sphere takes on a different meaning in her paintings than in the accepted patriarchal ideology, where the home was “the feminine space”. She had a sensitive manner of portraying people, seeking the individuality of each subject, foregoing the conventional. This gives her paintings a particular atmosphere, an intensity and a presence which amplifies the painting’s expressivity.

Eva Bonnier socialized with the sculptor Per Hasselberg while she was in Paris, and developed a complex emotional relationship with the man whom she planned to marry in 1892. However, the engagement ended and, upon his sudden death from syphilis in 1894, she adopted his new-born illegitimate daughter Julia. Eva Bonner had at this point returned to Sweden and acquired a studio on Hamngatan in Stockholm where she intended to finally start her painting career. She produced a series of portraits on commission, but more or less stopped painting after a few years due to her low self-esteem when it came to her own identity as a painter.

Eva Bonnier appears to have been intelligent and determined, and she was known for her sharp tongue. She had a certain depressive tendency but managed to live an active and full life in spite of it, full of commitments and travel. Her very independent and emancipated life differed markedly from the feminine norms of the time. Eva Bonnier was economically independent through her inheritance and did not need to be professionally active in order to provide for herself. At the turn of the century she produced a few pieces of art which she exhibited at the annual exhibitions held by Konstnärsförbundet, but in 1901 she left the association.

During the last years of her life Eva Bonnier lived with Julia in a simple house in Lilla Bergshamra, spending the summers on Dalarö, as during her childhood. She focused her efforts on the foundation which came to do so much for the artistic embellishment of Stockholm city. In 1909 she became ill with a severe cold and high fever during a visit to Copenhagen. She fell from her hotel window at Hotel Cosmopolite and died a few days later from her injuries. There remain, to this day, many unexplained issues around that event. Some claim that it was simply an accident. According to Eva Bonnier’s brother Karl-Otto Bonnier the fever had exacerbated her latent depression: “In the morning of the Epiphany I received terrible news from Copenhagen of my sister’s rapidly onset mental illness and accident, and since then I have not been able to think about anything else. We had hoped that her physical injuries would be benign and her mental illness short-lasting as on the previous two occasions.”

Eva Bonnier is buried in the Mosaisk area of the Norra cemetery in Solna. 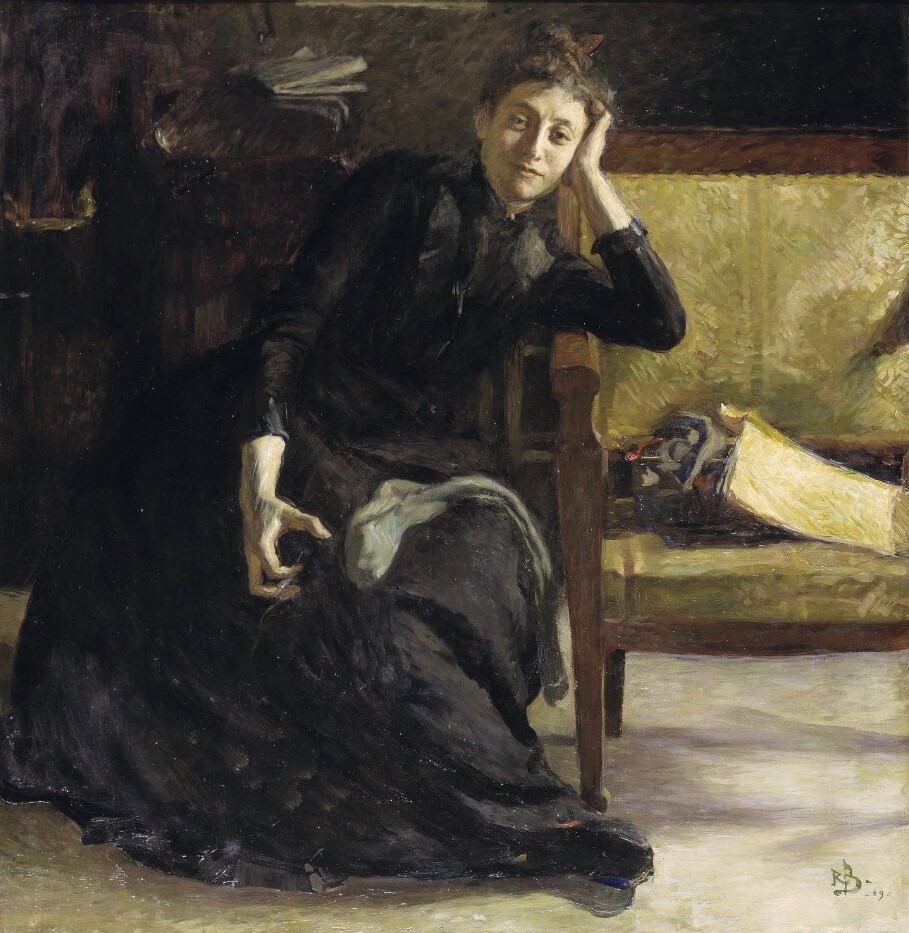