Ester Gill was a painter, drawer, illustrator, and creator of cartoons. She began to produce cartoons for Folkskolans barntidning in 1918, for the Dagens Nyheter newspaper during 1925–1939, and she also created illustrations for the Stockholms-Tidningen newspaper during 1924–1926.

Ester Gill was born Ester Johanna Pettersson at Långö works in Älvdalen in 1893. Her parents were Carl, the inspector of Långö ironworks, and Isabella Pettersson . Ester Gill suffered from polio when she was two years old, leaving her paralysed from the waist down. Due to her physical disability she spent several years receiving physical therapy and being educated at Eugeniahemmet and Norrbackainstitutet, both Stockholm-based institutions for the disabled. She also attended Fernanderska flickskolan (girls’ school) in Örebro, from third through fifth grade.

Ester Gill subsequently gained a thorough education in painting in the period up to 1921, partly at Ahltin’s school of art which was located off the same stairwell where she lived with her family, and partly at the Royal Swedish Academy of Fine Arts. She then went to live with her family, now settled in Malmö and set up an art school in the family apartment which she ran until 1924.

Ester Gill and her sister became the sole providers for the family following the closure of the two places their father worked, namely Långö ironworks and Baltiska Cement, leaving him unemployed. According to the parish records Ester Gill’s father then began to run an unspecified agency. As this was not a profitable occupation the children were forced to contribute financially to keep the family afloat.

In 1918 the Lund cathedral chapter officially recognised the formal adoption of the surname Gill by the Pettersson family. Subsequently most of the family began to use the Gill name alone.

Given her family’s precarious financial situation Ester Gill was not able to establish herself properly as a painter. The artworks she produced comprised smaller landscape studies in oil and watercolours, as well as drawings. Ester Gill began to draw cartoons, while her mother supplied the texts, for Folkskolans barntidning, from 1918–1926. Ester Gill then went on to draw cartoons for the Dagens Nyheter newspaper from 1925–1939. She also produced drawings on commission for the likes of Bonnier publishing house and she supplied illustrations for the Stockholms-Tidningen newspaper from 1924–1926.

While she lived in Malmö Ester Gill, and some friends, developed plans to set up an art school in St Petersburg and thus she began to learn Russian. However, following the death of her father in 1922 Ester Gill was forced to remain with her mother. Given her limited mobility Ester Gill was not able to live alone and from the mid-1940s, after her mother’s death, she mainly lived with her sister, Inger Waldau, in central Stockholm. The apartment was cramped as Ester Gill’s sister’s two young children also lived with them. Ester Gill had a tiny alcove in the kitchen to herself until the children moved out in the early 1950s. After that Ester Gill alternated between living with her sister and spending certain periods living with various other relatives. She spent the final years of her life at Råcksta hospice in Stockholm.

Ester Gill died in 1981. She is buried at Sankt Pauli Norra kyrkogården (Northern cemetery) in Malmö. 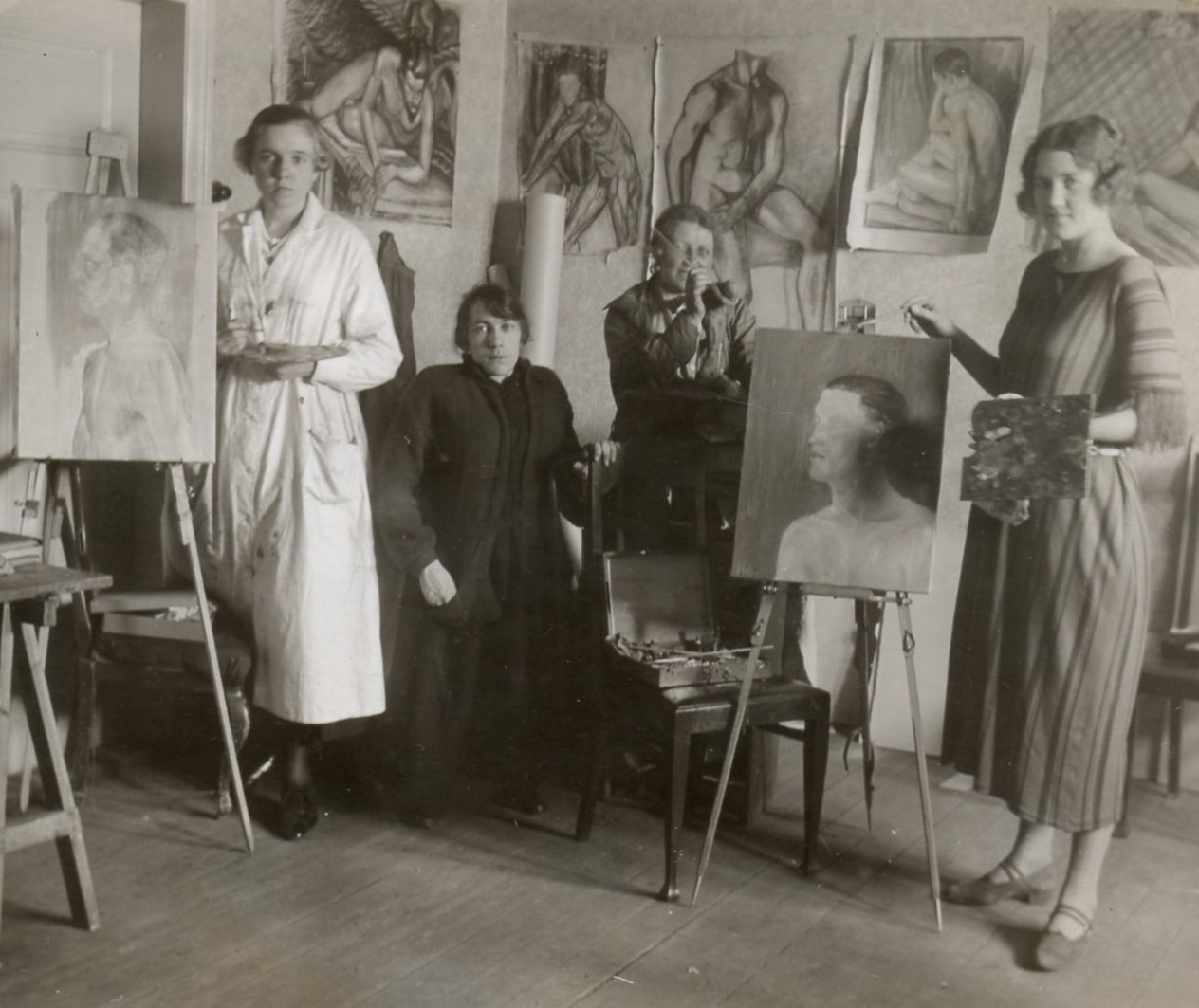 Ester Gill (second from left) with students in the art school she ran in the family home in Malmö, 1922 or 1923. Photographer unknown (privately owned image)