Ester Edelstam was an educational reformer, a teacher, and a school principal.

Ester Edelstam was born in Tumba, near Stockholm, in 1886. Her parents were C.G. Lindgren, a pharmacist, and Edla Lindgren. They both died, however, before Ester Edelstam’s first birthday and so she was adopted by Carl Fabian Edelstam, an auditor and regimental scribe in the Swedish army, and his wife Anna Edelstam, née Hierta, who was one of Queen Sofia’s Ladies of the Bedchamber. This title reflected her elevated social position and the prestige which accompanied it. The Edelstam family originally hailed from Dalarna and at that time numbered several influential and well-travelled individuals who played a significant role in Ester Edelstam’s childhood. The family, which included several older siblings, resided at Blasieholmen. They spent their summers at the Marby property in Oknön on lake Mälaren.

After graduating from Högre lärarinneseminariet (advanced female teacher training programme) in Stockholm in 1911 Ester Edelstam spent a few years in St Petersburg where she was employed as a tutor. She also undertook several study trips to investigate pedagogical matters and during the 1910s she also served as a Red Cross delegate. As such she visited German prisoner-of-war camps in which Russian soldiers were detained during 1917. Ester Edelstam also spent time in the USA during these years, studying the so-called Dalton plan, whose key words were freedom, cooperation, and an individual-based approach to teaching.

On her return to Sweden Ester Edelstam worked as a teacher at Brummerska skolan from 1917 onwards right up to 1924, when she founded Annaskolan. Until 1933 this advanced girls’ school was accommodated within the Timmermansorden building in Östermalm, Stockholm. The Stockholm Montessori school also had their premises in the same building. The intention was to create an environment for innovative pedagogical efforts which were inspired by the pedagogue Anna Kruse and her methodology as well as the then brand-new Waldorf approach. Anna Kruse’s fundamental idea was that children must be allowed to discover things for themselves instead of being taught. The role of the school was to awaken and develop children’s natural sense of curiosity.

A central element was the focused study of only a couple of subjects at a time, which gave the pupil a chance to deepen their studies. Most elements of schoolwork were undertaken during school hours and very little in the way of homework was set. The school also sought to concentrate on a given epoch under study so that the same era was studied in history, literature, art and history of religions. Groupwork was normally the order of the day, as were exercises in more practical subjects such as typewriting, stenography, and health care. The school garden provided options for children to tend to their own gardens. The tendency not to give out homework generated discussion within local households and at school meetings and was treated with a certain scepticism by its critics.

By 1923 Ester Edelstam had already founded a journal called Pedagogiska spörsmål: tidskrift för nyare pedagogiska rörelser. She remained the journal’s editor and legally responsible for its publication until it folded in 1940. The journal’s stated aim was to disseminate the new pedagogical trends which were in use at Annaskolan. Ester Edelstam also wrote several articles for other publications in which she made the case for the new reformed pedagogy. In 1933 Annaskolan was merged with Detthowska skolan, the latter of which had been founded by Alma Detthow in 1896. The combined Annaskolan-Detthowska skolan were subsequently, in 1939, absorbed, along with Brummerska skolan, into the Norrmalm municipal girl’s school. It retained a separate identity as its own department and Ester Edelstam ensured that its particular approach was maintained in relation to what she believed was a school policy of assimilation. She continued working as a teacher and educational reformer until she retired in 1949. She was succeeded by Märta Dandenell, who had also previously been active in the Red Cross.

Ester Edelstam was involved in several international networks such as the New Education Fellowship which campaigned for a more child-oriented view of learning. Through training, democracy, peace, and international collaboration it was believed that society could be reformed. The network was banned in several countries during the time of the Second World War but was subsequently revived after 1945. Today it is part of UNESCO. 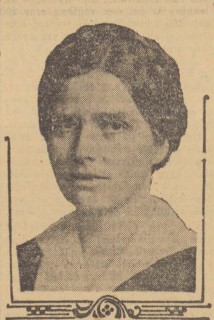