Ester Blenda Nordström was a journalist and an early female forerunner of Günter Wallraff.

Ester Blenda Nordström was born in 1891. She was the youngest child born to a Stockholm-based family and she had three older siblings. The family’s roots lay in the Småland countryside. After gaining her school-leaving certificate from the Wallin school in 1910 she began to work as a journalist the following year. She was initially at Stockholms Dagblad in 1911, followed by a brief stint at Dagens Nyheter. In 1912 she became an employee of Svenska Dagbladet, where she would make a name for herself amongst both fellow journalists and the readership. She was part of the so-called ‘Ligan’ and was a close friend of Elin Wägner and her husband John Landquist.

Ester Blenda Nordström’s journalistic talents already became apparent in the early spring of 1914 when she got an early month-long holiday which she spent under disguise working as a maid at a farm. The newspaper editor then convinced her to write up her experience and this became her major journalistic breakthrough. Just as the First World War broke out she began to get her reports published in Svenska Dagbladet and her book Piga bland pigor was also published later that same year. Ester Blenda Nordström became a celebrity and her book was released in many editions. Her methodology of disguising herself as a maid was highly unusual for the time. It was remarkably prescient of a method which became known, much later in the 1900s, as “to wallraffa” as a result of the journalist Günter Wallraff’s activities.

Ester Blenda Nordström worked as a journalist and a writer until the 1930s. Although she soon ceased working at Svenska Dagbladet she continued to write documentary reports for the newspaper, as well as for journals such as Morgonbris and Vecko-Journalen. She applied for and became employed as a teacher at a Sami school during the summer of 1915. Initially she published her experience in article form through Svenska Dagbladet, and later these were compiled into a book entitled Kåtornas folk, published in 1916. Following her experience on a long journey as a 3rd-class passenger across the USA she published Amerikanskt: som emigrant till Amerika in 1923. Her next travel experience would be even longer: she married the ethnologist René Malaise in 1925 so that she could accompany him on an expedition to Kamchatka. The marriage ended following her return home after a number of years. She wrote up her experiences in the book called Byn i vulkanens skugga, published in 1930.

In 1919 Ester Blenda Nordström published her first fictional book, En rackarunge, in what represented an official departure from journalism in favour of fiction. The book was the first in a long series of much-loved portrayals of a girl as she came of age. The last book of the series is Patron förlovar sig, published in 1933. The main character – who is a tough, rebellious girl and bears notable similarities with Ester Blenda Nordström herself – has subsequently been described as a precursor to Astrid Lindgren’s Pippi Långstrump (Longstocking) and Madicken. 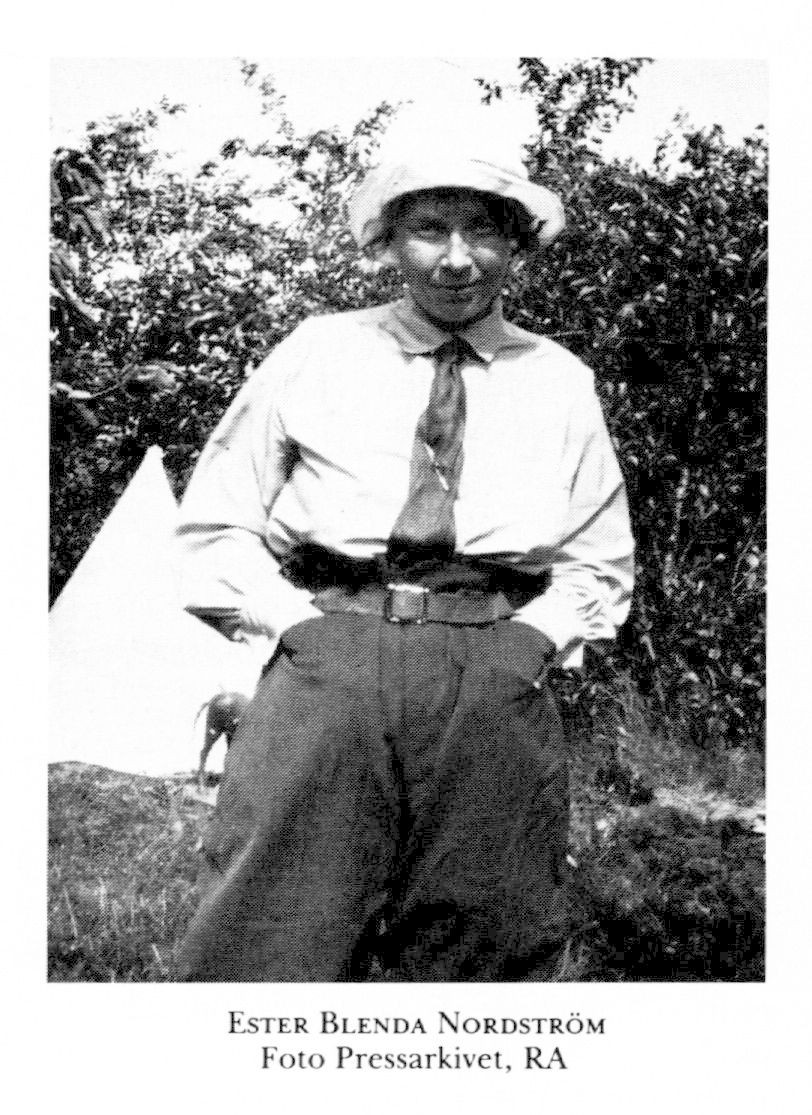