Emma Löwstädt-Chadwick was one of several successful Swedish female artists who studied in Paris during the 1880s. She was a member of Opponentrörelsen (the opponent movement) and she was resident in Grez-sur-Loing. Her artwork was displayed annually at the great Paris Salons as well as in Sweden.

Emma Hilma Amalia Löwstädt-Chadwick was born in Stockholm in 1855. She was the daughter of master tailor Carl Rudolf Löwstädt and his wife Carolina née Nordqvist. Her paternal grandfather was Carl Theodor Löwstädt, a painter of miniatures, an illustrator, and a lithographer.

Her father was well-off and respected and his successful business made him one of Stockholm’s leading tailors. Rudolf Löwstädt was an active communist, having adopted that political stance during his time as an apprentice in Paris where he had become friends with the philosopher Etienne Cabet. Emma Löwstädt-Chadwick was the second eldest of five children. Her mother died when she was just nine years old, a few weeks after she had given birth to her youngest child, Eva. Eva later went on to become a well-known artist, Eva Löwstädt-Åström.

Emma Löwstädt-Chadwick’s father encouraged her in her artistic pursuits. He himself had hoped to become an artist as a young man but had lacked the financial resources at the time. Now that Rudolf Löwstädt was wealthy he could support his daughter not just financially but also through his critiquing and helping her in every way he could whilst she resided abroad.

During the 1874–1880 period Emma Löwstädt-Chadwick attended the Royal Swedish Academy of Art in Stockholm. Her classmates included the likes of Julia Beck, Carolina Benedicks-Bruce, Eva Bonnier, Mina Carlson-Bredberg, Karin Larsson, and Jenny Nyström. She did well as a student, gained favourable attention for her work and won prizes in the annual competitions held by the Royal Swedish Academy of Art: once in 1879 for her painting entitled Scen ur syndafallet and then the following year for her interpretation of the competition theme Lokes fängslande.

Emma Löwstädt-Chadwick spent the summer of 1879 on the Breton coast where she followed the new French trends of impressionism and painting en plein air. She painted flocks of sheep at the seaside as well as scenes depicting the lives of people who lived in coastal France. This style of painting could hardly have been more different from what she had practised at the Royal Swedish Academy of Art. Two of her paintings were displayed at an exhibition held by Konstföreningen in Stockholm that year which were positively reviewed by Carl Rupert Nyblom in the Post och Inrikes tidningar newspaper.

In 1880 Emma Löwstädt-Chadwick once again made her way to France, to Paris. She began to attend Académie Julian, which was one of the few private schools which also accepted female students. Her teachers were Jean-Charles Cazin and Tony Robert-Fleury. In her first year as a student one of her paintings was accepted for display at the Paris Salon, the major and prestigious exhibition at which all artists fought to get their work accepted. Indeed, just the fact of being accepted was a form of recognition, which could lead to public mentions as well as gold and silver medals.

Emma Löwstädt-Chadwick’s paintings were accepted at the Salon every year throughout the 1880s and into the 1890s and, indeed, even as late as in 1924. She portrayed everyday peasant life and coastal populations but she also produced portraits and tranquil interiors. In 1887 she received special mention at the Salon for her painting entitled Five o’clock tea, which was later displayed in Stockholm and favourably reviewed by Claes Lundin in the journal Idun in 1892.

Emma Löwstädt-Chadwick married in 1882. Her husband, Francis Brooks Chadwick, was a wealthy American artist. The couple enjoyed an extensive social network, which not only included Swedish artists who intermittently spent time in Grez-Sur-Loing. This small village south of Paris became the centre of the Nordic artists’ colony in France and served as the couple’s fixed point of reference. They had a house built there and purchased Pension Laurent, which was one of only two boarding houses in the place. Although Emma Löwstädt-Chadwick had three children she never gave up her profession. Her husband’s wealth allowed the couple to live a carefree life, taken up by many painting-trips to a variety of countries such as the USA, Spain, North Africa, Italy, and Great Britain, providing new motifs for Emma Löwstädt-Chadwick’s paintings.

In 1885 Emma Löwstädt-Chadwick was one of 84 artists who signed Opponentrörelsen, a protest against the stultified Royal Swedish Academy of Art. She joined Konstnärsföreningen on its establishment the following year and participated in several of their exhibitions. Later on she came to focus heavily on the graphic arts and joined Grafiska Sällskapet from its inception.

In 1945 the National museum in Stockholm held a commemorative exhibition called Opponenterna av 1885 which naturally included works by Emma Löwstädt-Chadwick as well as that of another seven female artists. She and Hanna Pauli were highlighted in the catalogue compiled by Sixten Strömbom, who described them as leading Swedish “figurmålarinnor” (female painters of figures) at the time. Despite this their work was not given extensive coverage: although Opponenterna av 1885 was a comprehensive exhibition displaying a total of 628 pieces of artwork, 598 of these were works by men.

The 1880s proved to be an exceptional decade for female artists in Paris during which they could enjoy a period of freedom from bourgeois demands whilst devoting themselves entirely to their art and to socialising with like-minded people. This era has been recognised in several exhibitions and books. In 1988 Liljevalchs art gallery held an exhibition entitled De foro till Paris (they headed to Paris), which was a comprehensive presentation of twenty-six Nordic female artists, including Emma Löwstädt-Chadwick.

In 2017 the Denver Art Museum in the USA held a travelling display entitled Women artists in Paris 1850–1900. Emma Löwstädt-Chadwick was represented by her atmospheric oil painting entitled Strandparasollen, Bretagne, dated 1880, a portrait of her fellow artist Amanda Sidvall who was depicted sitting at her easel on the beach under a parasol. This same painting had already been on display at the aforementioned commemorative exhibition at Stockholm National museum in 1945.

Emma Löwstädt-Chadwick died in Avignon in 1932. Her work can be seen at Stockholm National museum and at several museums abroad. 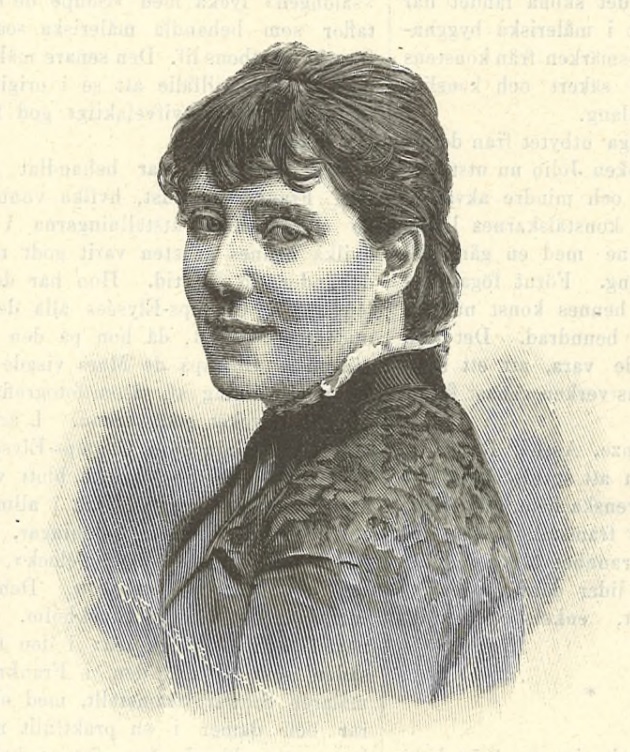