Emily Nonnen was an artist, an author, and a translator.

Emily Nonnen was born in London. Her father, John Nonnen, was a British businessman. He and his German wife and their five children moved to Gothenburg in 1819. That city had suffered a severe economic crisis as a result of the Napoleonic Continental blockade and John Nonnen intended to support his brother-in-law, A.R. Lorent, by serving as his general manager and thereby also save his own investment in his brother-in-law’s business and enterprise, namely the sugar factory and porter beer brewery at Klippan. This was the biggest business in Gothenburg at the time. The family eventually settled down in the area known as Liseberg.

Emily Nonnen, her brother, and four sisters, gained a thorough education at home by undertaking disciplined self-directed learning under their parents’ guidance. Their mother had mastered German, English and French whilst their father taught them mathematics and Latin. Her brother, Edvard Nonnen, was from an early point focused on the sciences both in Sweden and overseas, and sought a future within the agricultural sphere. He later set up the first agricultural institute in Sweden near Lidköping. Emily Nonnen and her sisters were taught music and painting in oils. The family spent time in both London and Gothenburg, moving within academic and learned circles. In Gothenburg they were part of the ‘British Factory’, which was an association of British merchants, and they belonged to the British congregation. Emily Nonnen’s eldest sister married the vicar within this congregation, who later became a vicar in Wales. The three remaining sisters never married and saw out their lives at Liseberg. They painted, drew small portraits and genre pictures, and played the piano. Emily Nonnen also played the violin and studied Italian. These women’s lives illustrate how contemporary young women of the bourgeoisie were expected to be: educated, conversational, interested, lovable, shy, considerate, and always busy with suitable hobbies. When their father went bankrupt in 1833 the lives of everyone in the family changed radically, even despite the fact that David Carnegie – who took over the sugar factory in 1836 – allowed John Nonnen to remain as general manager and the business returned to a stable footing. Straitened finances forced the family to turn the park area around their home at Liseberg into a commercial garden. The sisters worked in the garden, ran the household themselves, and took in young female boarders who were also given school instruction.

Emily Nonnen travelled to Copenhagen in 1838 in order to further develop her art. She took lessons in painting portraits from Professor M. Rörbye, as well as lessons in drawing from C. W. Eckersberg. She also met many other artists. When she returned to Sweden the following year she received a lot of commissions for portraits. In 1842 Emily Nonnen was elected into the newly-established Slöjdföreningen (handicrafts society) in Gothenburg. That same year she spent some time painting in Stockholm and exhibited there. She socialised with a lot of authors and cultural celebrities in both Stockholm and Uppsala. She then began to give painting lessons in Gothenburg. Meanwhile the sisters were taking in increasing numbers of private female students and teaching them ever-wider ranges of subjects. Following the death of John Nonnen in 1845, Emily Nonnen’s mother and the unmarried sisters came to be in receipt of annual sustenance funds from Carnegie to facilitate their continued existence at Liseberg. Emily Nonnen and her sisters were actively involved in Gothenburg society and travelled a lot, despite their limited finances. In 1847, for example, Emily Nonnen visited England and Scotland on David Carnegie’s yacht.

Emily Nonnen then began to undertake translations from Swedish into English, including works by Tegnér and Runeberg, Fredrika Bremer, and Viktor Rydberg. She translated Florence Nightingale’s book on nursing into Swedish and also visited her in London. She introduced the Swedes to Lewis Carroll’s Alice in Wonderland (Alice i Underlandet in Swedish) through her translation published in 1870. She also published eight books for young readers between 1858 and 1879, including romantic titles such as De tvenne Guldhjertan eller Guds Öga vakar, Familjen på Örnaholm eller Lifvets skiften, Lorenzo och Rosilda eller Marmorgruppen, Rubinringen eller Sanningen Segrar, and Granatkorset eller Ros och lilja, each of which contained moral and didactic messages. In 1866 she also published a children’s journal called Talltrasten.

Emily Nonnen died in Gothenburg in 1906. 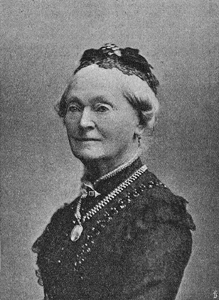