Emilie Petersen, known as ‘mormor på Herrestad’ (Grandma Herrestad), was a landowner, a philanthropist, and a pioneer of the Swedish sewing-society movement.

Emilie Petersen was born in Bostel, near Berlin, in 1780. Her father was Johann Christian Eckerdt. Her mother was Catharina Cecilia Leve. One of her father’s occupations was that of a merchant, which meant that he was often away from home on his travels. Emilie Petersen was educated at the Gütschow boarding school in Hamburg. In 1803 she married a wealthy merchant named Johan Philip Petersen.

In 1806, as French troops occupied Hambug during the Napoleonic war, the Petersen couple fled to Sweden. They settled near Växjö, where Emilie Petersen’s sister, Elise, was living with her husband Baron Fredrik Rappe. In 1813 the Petersen couple purchased the Herrestad estate in Kärda parish, just outside of Värnamo. The property comprised, in addition to the manor, a saw-mill, a mill, and about 40 crofts.

Although Emilie Petersen and her husband had no children of their own they did have foster children. The couple had already take on the care of Emilie Petersen’s niece, Emmy Rappe, in Hamburg and she lived with them until she married Carl Rappe in 1820. Their second foster child, Sofie von Holst, moved in with them at Herrestad in 1817. For a while Emmy Rappe’s daughter, Emilia, also lived at Herrestad with the Petersens.

Emilie Petersen and her husband set up a benefits agency for the poor who lived on their land and they also established a school on their estate at Norra Berg. The school was distinctly religious in character but also provided practical training in carpentry and sewing crafts, for example. Following the death of her husband Emilie Petersen further developed this enterprise by setting up an institute for orphans. It was as a result of this ‘rescue-school’ that she came to be known as ‘Grandma Herrestad’. She had been inspired to set up the school through her friend Johann Hinrich Wichern, who was himself the founder of the German protestant home mission movement. He had established a rescue-home for impoverished children outside of Hamburg, known as Rauhes Haus, in 1833.

Emilie Petersen was active within the emerging church revivalist movement and this activism only increased following the death of her husband in 1835. She supported Svenska Missionsällskapet (Swedish mission society) and its missionary work amongst the Sami in Lappland and, from January 1838 onwards, she held monthly prayer meetings at Herrestad in support of the mission. During the summers these meetings would be held outdoors and sometimes resembled folk celebrations. Some of the more notable churchmen who were involved in these gatherings included the missionary Peter Fjellstedt, a frequent visitor to Herrestad, and Peter Wieselgren, a temperance activist, and Carl Olof Rosenius, a pietist preacher.

In order to alleviate need in the parish Emilie Petersen set up Fruntimmersföreningen (women’s society) in Kärda parish, which was a type of workers’ association for poor women, based on the principle of self-help. The women produced a variety of textile goods, and they were allowed to keep some of the profit from the sales. The parish was divided up into five sections, each in the charge of unsalaried female wardens who led and organised the work to be done. Outreach programmes were also set up amongst the poor in the parish. These were based on Amalia von Sieveking’s Weiblicher Verein für Armen und Krankenpflege established in Hamburg in 1831. Emilie Petersen received help and financial contributions from Protestant friends in Germany. This enterprise also had the support of members of the Swedish royal family, who were behind a significant number of the orders for the items produced by the workers.

Emilie Petersen legitimised her activities by basing them on the Lutheran doctrine of vocation and she described her role as fulfilling the housewife’s vocation. As a widow she took over her late husband’s role as head of the household and thus she was able to organise and lead the comprehensive social enterprise which she set up. At this time Emilie Petersen, like other socially-active middle-class and upper-class women, focused her social activism not just on supporting and helping the impoverished and suffering but also on teaching them to be good Christians.

Emilie Petersen’s social activism can be viewed as an extension of low-church revivalism and she did work closely with like-minded priests in the neighbouring areas. One of these was Johan Fredrik Ydström, who was the pastor of Kärda from 1848 onwards. Her relationships with other parish priests were not so fruitful. She, like many revivalists, believed that priests who could not deliver on requirements of personal piety and good morals should be avoided. With the permission of Archbishop Esaias Tegnér Emilie Petersen ensured that her foster daughter Sofie von Holst was confirmed and received her first Holy Communion in a neighbouring congregation as she felt that neither of the two priests in Kärda met her high expectations.

Emilie Petersen ensured that the religious gatherings at Herrestad were led by a priest. She had already started a sewing- and knitting school at Herrestad in 1835, which served as the embryo of Fruntimmersarbetsförening för Missionsverket i Lappmarkerna (female workers’ association for the Lappland missionary enterprise), which was established in 1844. This was the first religious sewing association in Sweden and it quickly gave rise to many others like it. Its members would meet once a week at Herrestad where they would sew items for the Lappland mission and they would pray, sing religious songs, and listen to bible-readings under the guidance of a priest.

During the 1850s Emilie Petersen organised a so-called colporteur enterprise to complement the Fruntimmersförening visiting activities. This involved trusted men who were sent to the poor in the parish to hand out bibles and to offer moral support. Later this evolved into a lending-library of religious literature and journals. The first of these colporteurs was a former school-teacher. This enterprise was actually at odds with church law and conventicle acts, particularly as these colporteurs led services in people’s homes. However, since pastor Ydström had given his permission for these activities the church authorities never actually tried to prevent their implementation.

During the mid-1800s the Herrestad estate served as a religious centre and Emilie Petersen in many ways stands out as a pioneer of early Swedish philanthropism. She also came to serve as a source of inspiration for church social welfare efforts. Her foster daughter Emilia Rappe and Marie Cederschiöld, a priest’s daughter, who had been involved in Fruntimmersföreningen at Herrestad for some time already, co-founded the Ersta diakonissanstalt (social-welfare institute) with her, and Marie Cederschiöld became the institute’s first director. These institutes were organised, according to the Lutheran doctrine of vocation, with the patriarchal family as its role model.

Emilie Petersen died in 1859 and is buried at Kärda cemetery. 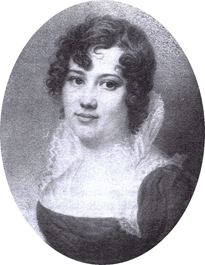