Elsa Nyblom was a journalist and an author who influenced public opinion with her social realist writing.

Elsa Nyblom was born in Stockholm in 1890. She married Erik Nyblom in the autumn of 1913. He was a journalist for Dagens Nyheter who wrote under the name Mac. They had a son together called Lennart who was born in March 1915. He too came to work at Dagens Nyheter and became known as the columnist Red Top, who wrote causerie-style articles.

In the summer of 1913 Elsa Nyblom started to work as an intern at Dagens Nyheter. She was an early representative of a new type of journalism, which she herself called “practical journalism”. In 1913 she set up day camps for children, initially on Lidingö and later on Tynningö, which she also reported on. She subsequently wrote about other social activities in Dagens Nyheter, such as a sewing hut for poor mothers in 1916 and later on a collection of funds for poor families who had suffered the impact of the Spanish flu. This type of journalism influenced public opinion, a technique which Elsa Nyblom also developed in the journal Vecko-Journalen and applied for instance to improve the situation for children or their families.

Elsa Nyblom’s mainly worked within journalism as an editor for the weekly press. She collaborated with Thora Holm when the journal Husmodern was established in 1917. She also wrote for Vecko-Journalen. In the autumn of 1923 she was hired by Ähle & Åkerlund as an editor in order to set up Husmoderns månadshäfte, but this was only a short project. Elsa Nyblom was then hired by Vecko-Journalen and eventually became the journal’s editor. During her time as editor the journal sought to become a leading debate forum with socially critical columnists such as Erik Lindorm, and unique reports, for instance on the expedition to Kvitøya in 1930 which investigated the remnants of the Andrée expedition to the North Pole. In 1943 Elsa Nyblom was encouraged to leave the newspaper. She then became the editor of the Aftontidningen supplement called Hennes horisont 1944-1945, and the following year she worked as a literary advisor for Ljus publishing house. From 1917 onwards Elsa Nyblom was a member of the Press Club and she was a board member from 1937 to 1940.

After a successful radio interview about her childhood in 1944 Elsa Nyblom released her first book the following year. Strängt personligt, 1945, comprises two stories. One of them, “Bahian – en tolvskillingsopera på Östermalm”, recounts life in a run-down and poor block of flats in Östermalm. Elsa Nyblom described the many poor people living there in a lively, joyful, and sympathetic manner. Her mother was a midwife and cared for everyone in the house. The other, “Byn”, tells the story of an idyll in Västmanland and memories of summertime spent at her maternal grandmother’s cottage. It was followed up with a sequel called När hjärtat var ungt, 1946. In Kvinna u.p.a., 1948, Elsa Nyblom reveals her early ambitions to become an actor and her path toward becoming a journalist, portraying editorial life from both Dagens Nyheter and Vecko-Journalen. In addition to these three books she also wrote some novels and some books for young adults. She also wrote a chronicle play called Jordemodern about the development of professional midwifery and the midwives’ fight to gain formal training. It was performed at a midwives’ congress in 1947. 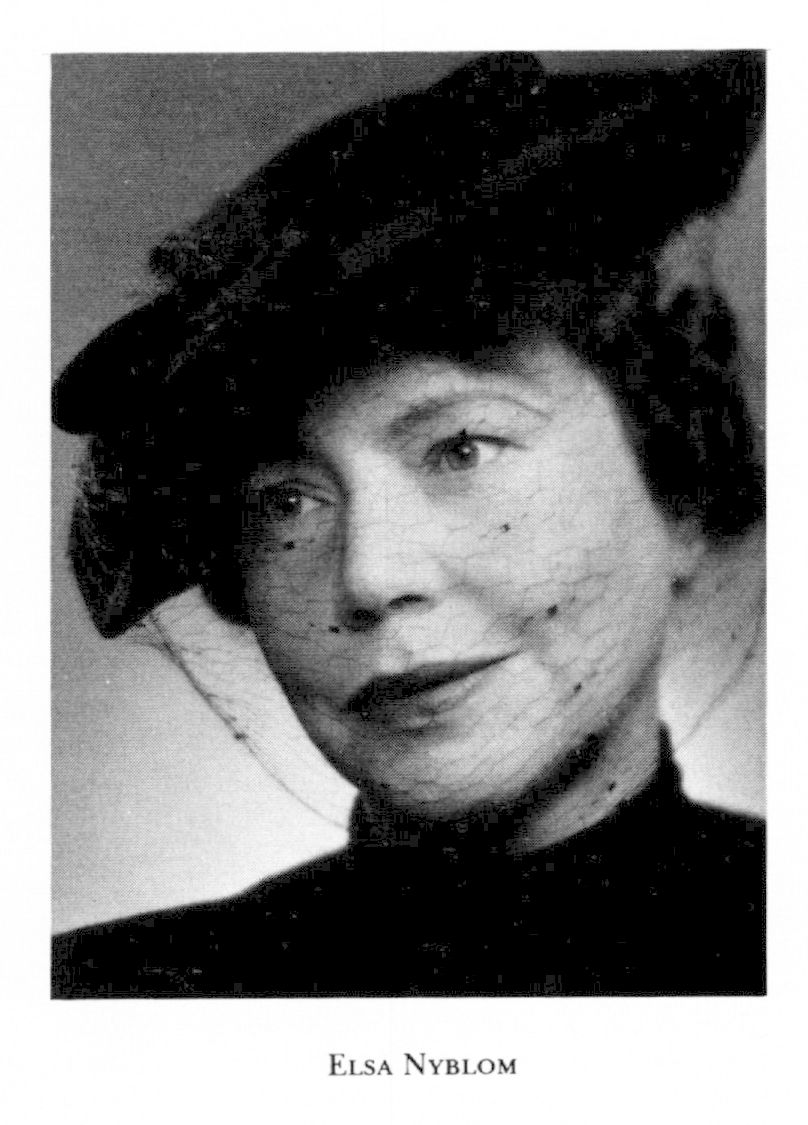