Elsa Skäringer-Larson was a teacher, an author, and a politician. She belonged to a group of pioneering public school teachers who championed educational reform which placed the interests and activities of the pupils in focus.

Elsa Skäringer-Larson was born in Varnum congregation, near Kristinehamn, in 1900. During the 1920s she qualified as a public school teacher. During the 1930s she taught at Karl Johansskolan in Gothenburg where she met other teachers keen on reforming the education system, including Ester Hermansson. Although Karl Johansskolan can be viewed as a kind of educational reform hub Gothenburg was also home to other schools and individuals that were important within the sphere of educational reform. For example, around the turn of the century the reformed Gothenburg advanced co-educational school was established. Lorenz Gottfrid Sjöholm, who was editor of the educational reform journal Skola och samhälle amongst other roles, also worked at the public school-teacher training programme and was thus also active in Gothenburg at this time.

It was thanks, in part, to Ester Hermansson’s connections in Austria that Elsa Skäringer-Larson and some of her colleagues visited that country. During this study trip the Swedish visitors learned how Austrian reformed schools had developed their teaching methods by applying research undertaken in experimental schools and this inspiration was brought back to Sweden. A few years later Elsa Skäringer-Larson became involved in a major activity-based pedagogical experiment project under the guidance of Elsa Köhler, the famous Austrian reform educator. The results were subsequently published in Elsa Köhler’s 1936 book Aktivitetspedagogik. Elsa Skäringer-Larson contributed half a chapter to the book. This publication and the project itself were likely quite unique at that time in Sweden given that teachers were clearly included in the research procedures.

Elsa Skäringer-Larson became an active member of various organisations and associations during the 1930s, including the peace movement. Her temperance movement activism can be seen through her membership of the board of Sveriges Lärares Nykterhetsförbund (SNF; Swedish teachers’ temperance association). Her presence on the SNF’s original board probably reflects that she was one of the organisation’s co-founders. She was also a representative of Sveriges Folkskollärarinneförbund (Swedish female public-school teachers’ association).

Elsa Skäringer-Larson, like many other Swedes at the end of the 1930s, developed an interest in contemporary American pedagogical developments. She and Ester Hermansson received a small stipend from Göteborgs Folkskolestyrelse (Gothenburg public school board) to fund a trip to the USA and to cover their sabbaticals. Following the trip, and as part of Sveriges allmänna folkskollärarförening (Swedish general public-school teachers’ association) series called Pedagogiska skrifter, a book entitled Demokratisk fostran i USA was published in 1941.

This book was just one in a series of American accounts written by various writers. Elsa Skäringer-Larson’s book – despite being preceded by the likes of Nils Hänninger’s Den amerikanska uppfostringsvärlden in 1922 and Ester Hermansson’s I Amerikanska skolor in 1940 – should nevertheless be seen as a pioneering work. Further, around the same time (1941), Gunnar and Alva Myrdal released Kontakt med Amerika, a book which also presented the American school system as a role model.

Elsa Skäringer-Larson’s book is of interest in several ways and is deservedly highlighted by historians of education and educators as a classic which contributed to the dissemination of American educational reforms. Elsa Skäringer-Larson, along with other Swedish authors, showed her mettle in so clearly promoting democratic ideals and the USA as a role model at a time when much of Europe was occupied by the Soviet Union and Germany, while Sweden was literally surrounded by aggressive dictatorships. The book can be read as a lengthy manual for managing schools so that they contribute to democratic society. It was not enough for schools to simply teach subjects like citizenship, no: the way teaching was managed in itself was also expected to promote the evolution of a democratic mindset. Further, schools should also form part of wider society and, not least, it was important to have cooperation between schooling and homelife.

It is difficult to measure the impact of the book in simple terms but it was, for example, referred to in Gösta Bagge’s major school enquiry which preceded the 1946 schools commission. The preliminary report, Skolans inre arbete (SOU 1946:3) discussed various types of collaboration between schools and homelife, making direct reference to Elsa Skäringer-Larson’s book. It was also reviewed in Skola och samhälle, the contemporary publication for educational reform. Elsa Skäringer-Larson’s book was also referenced in Stockholm’s morning papers whenever queries arose on the cooperation between schools and homelife.

In addition to her heavy engagement in school matters Elsa Skäringer-Larson was also an active member of Folkpartiet (the Liberal People's Party). She had already helped to produce material for use in study groups for Folkpartiet’s youth association by the 1930s. She also was a member of Gothenburg town council, as a member of Folkpartiet, from the late 1940s onwards. She remained politically active until the 1960s, including serving as a party representative on a local trust.

At the same time her career within the school agency continued, albeit with certain difficulties. When she applied for head teacher posts around the 1949–1950 period she was often overlooked despite her many qualifications and her recommendations from the School Board. This led to printed discussions in the local press, while the Göteborgs-Posten newspaper carried a headline that accused the communists and Social Democrats who were on the Gothenburg school board of being “conservative” by refusing to award the post to a female applicant. Eventually, in the early 1950s, Elsa Skäringer-Larson did get a head-teacher post in Gothenburg. A little while later she was appointed principal of the schooling area, which included Karl Johansskolan. Elsa Skäringer-Larson remained a principal until she retired in 1966.

Elsa Skäringer-Larson has, as noted, often been inserted into the history of Swedish schooling as an early Swedish educational reformer, which is correct. However, an educational history perspective which should be highlighted is that she can also be seen as one of a particular group of female progressive Folkpartiet members who all took great interest in Anglo-Saxon educational reforms but who also had significant experience in teaching and the school system. The most influential individual in this group of teachers was the Minister for Education, Birgit Rodhe, who was responsible for producing an extremely progressive-leaning teaching plan, amongst other things. She had also visited the USA and had written about the progressive teaching of history, geography and similar, socially oriented subjects there. Another high-profile individual in this sphere was Greta Hedin, perhaps best known as a historian, but who was also a Folkpartiet member, a progressive, and active in Gothenburg. Like Elsa Skäringer-Larson, she also wrote a book albeit hers was about the English school system and she described its progressive aspects.

Elsa Skäringer-Larson died in 1969, a few years after she had retired. She was buried at Ölmstad cemetery, a few Swedish miles northeast of Jönköping. 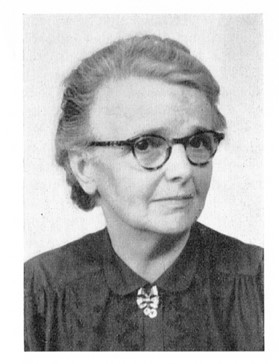