Elsa Collin was an actor and a theatre critic who was active in the early 20th century.

Elsa Collin was born in Helsingborg in 1887. Her father was the secondary town physician in Helsingborg. Her mother died when Elsa Collin was just two years old, and her father remarried. Elsa Collin was thus brought up with both half- and step-siblings. She studied at the Appelgren school in Helsingborg, but she obtained her school-leaving certificate in Gothenburg. In 1907 she began to study at Lund University and two and half years later, in the autumn of 1909, she sat her exams for a Bachelor’s degree in art history, literary history, and political science. As a student in Lund she was a member of Den Yngre Gubben (D.Y.G), which was a politically radical association. She also submitted poems to the journal Majgreven, which also featured submissions from the author Vilhelm Ekelund. In 1907 she was one of the first women to contribute to a “studentspex” (student review show) called Gerdaspexet.

Elsa Collin moved north in 1909 and performed the role of the daughter in Moderskärlek at Uppsala city theatre. From 1911 to 1912 she was a member of the Lilla teater ensemble in Stockholm. From 1912 onwards she focused on writing, both fiction and critical reviews. She worked for various journals in Stockholm and for quite some time served as a theatre critic for the daily Arbetet in Malmö. She wrote “Rösträttsången för kvinnor”, which was published in the journal Morgonbris, as well as other poems which were published in the same journal. Together with the likes of Brita von Horn – whom she knew well – and others she helped to found the theatre group called Svenska dramatikers studio (Swedish dramatists’ studio) whilst also being active as its administrator and secretary from its inception in 1939 until 1941.

Elsa Collin died in Stockholm in 1941. She is buried at the Nya cemetery in Helsingborg. Her obituary was written by the actor Helge Hagerman. 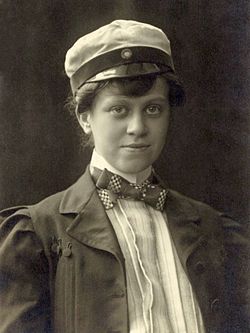