Teacher, wartime nurse, known as the angel of Siberia

Elsa Brändström, often called “the angel of Siberia”, is famous for her work with the Red Cross. She sought to improve the conditions for Central Powers prisoners of war, who endured extremely harsh conditions while in Russian prison camps in Siberia during the First World War.

When war broke out in 1914, she and her friend Ethel von Heidenstam signed up for a course in military nursing, whilst also serving at a military hospital which was funded by donations from the Swedish delegation. When the so-called exchange of invalids between the warring parties was organised, with Sweden as intermediary, Elsa Brändström was one of the Red Cross nurses who participated in transporting the wounded. In 1915 Elsa Brändström was asked by the Swedish Red Cross to provide relief work in the large prisoner camps in Siberia and to inspect the camps as a representative of neutral Sweden and Denmark. She also travelled across Siberia delivering donated necessities to prisoners of war. Conditions in the Siberian camps were extremely bad. There was a dearth of winter clothes, blankets and mattresses, sanitary provisions were poor and a lack of medicines and basic medical supplies led to repeated outbreaks of diseases, in particular typhus. Of the nearly two million Central Powers prisoners of war in Russian camps during the First World War an estimated 700,000 died.

Accounts of Elsa Brändström’s work in Siberia emphasize her effectiveness and initiative. She is considered to have saved tens of thousands of lives with very limited resources by organising and streamlining medical care in the various camps she visited. The Stretensk camp in Siberia, which she visited in 1915, became the prototype for her approach. By separating the sick prisoners from the healthy ones, arranging hospital sections and organising efficient water collection she brought an end to the ongoing typhoid epidemic, which would otherwise probably have led to far higher mortality figures.

Following the peace of Brest-Litovsk in March 1918 the situation worsened for the prisoners in Russia. The Czech prisoners in Siberia had, before the Russian revolution, been recruited by the Russians, in the hopes that Bohemia would become independent when the war ended. During the Russian civil war they joined the White army and began to execute Hungarians and Austrians in the camps. Even members of the Red Cross were included. In 1918 Elsa Brändström was arrested under suspicion of being a spy. She was threatened with execution but was absolved.

During 1919 Elsa Brändström contracted typhoid and returned to Sweden in 1920. Toward the end of the Russian civil war Elsa Brändström continued to support the remaining German and Austrian prisoners of war. Her activities were partly funded by the publication of her memoirs of the time spent in the prisoner of war camps and by a lecture tour through the USA, as well as by working for the Siberian prisoner of war relief association. With donated funds she was able to purchase the Marienborn health resort in Saxony and converted it into a work and retirement home for former prisoners of war. She also established a children’s home in Neusorge castle for those whose fathers had died in Siberia.

In the autumn of 1929 Elsa Brändström, at the age of 41, married the German academic Robert Ulich and they settled in Dresden. In 1932 their daughter Brita was born. Due to her work with prisoners of war Elsa Brändström was approached by Adolf Hitler in 1933 but she rejected any further cooperation. Her husband disapproved of the Nazi takeover of power and in 1934 the family moved to USA. From there Elsa Brändström worked with obtaining residency permits for hundreds who were fleeing Nazi Germany and the occupied Scandinavian countries.

With regard to her humanitarian contributions, Elsa Brändström has been likened to Raoul Wallenberg. Several biographies and other accounts mention that she was considered for a Nobel prize multiple times. She has been described as stubborn and psychologically resilient and as an effective and perceptive organizer with a strong sense of social justice and strong leadership skills. It is clear that she left a strong impression on her environment and had a remarkable talent for dealing with the media. Several short pamphlets and exhibitions, largely based on her own accounts and her school friend Elsa Björkman-Goldschmidt’s biography, testify to the interest she generated among her contemporaries in Sweden. At her funeral in 1948 she was described by the Stockholm bishop Manfred Björkquist as “the fighting Valkyrie of mercy”. There is some truth in these words. The young Elsa Brändström once appeared dressed as a Valkyrie when laying a laurel wreath at the bust of the warrior king Gustav II Adolf at the Swedish society of Saint Petersburg’s annual celebration on 6 November 1910. Another account, referred to in one of her biographies, is more evocative in its duality: Elsa Brändström accepted her tasks with the assured bravery of a Salvation Army soldier and the triumphant certainty of a ball queen.

Without actually placing herself in the forefront of women’s rights, Elsa Brändström, like many other women (mainly of the bourgeoisie) in the first half of the twentieth century, appears to have practiced emancipation to an astonishing degree, which probably contributed to the great interest she generated. In addition to a range of monuments dedicated to her, several schools in Germany have been named after her. There are more than 130 streets and roads named after her in Germany and Austria. In Sweden there is a street in Linköping and one in Hägersten named after her.

After the end of the Second World War Elsa Brändström was afflicted with breast cancer, and she died on 4 March 1948 in Cambridge. Her grave can be found at Norra cemetery in Solna. 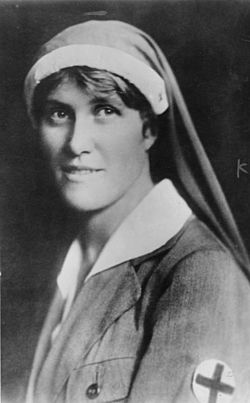