Elly Löfstrand was an instigator of the Swedish phenomenon known as “husmorsgymnastik”, or fitness exercise for housewives. The establishment of this form of exercise, aimed at women who worked at home, was a remarkable contribution to the Swedish public health enterprise.

Elly Löfstrand was born in Stockholm in 1913. Her parents were Knut Gottfrid Löfstrand, a merchant, and Josefina Löfstrand, née Svensson. Very little is known of Elly Löfstrand’s childhood and early education. However, from 1934 to 1936 she was a student at Gymnastiska centralinstitutet (GCI, now Gymnastik- och idrottshögskolan, GIH, school of sport and health sciences). There she trained as a physical education instructor, thus making her particularly suited to the task of improving the physical and psychological health of housewives. Her training included both exercise for fitness and physical therapy. Elly Löfstrand’s sporting background comprised a broad interest in the sphere: athletics, swimming, skiing, and speed-skating. She was a member of a series of committees within Svenska Gymnastikförbundet (SvGF, Swedish Gymnastics association) and Stockholms idrottssektion för kvinnor (Stockholm sporting division for women). This entailed becoming involved in “campaigning on behalf of women’s sport among women”.

Fitness exercise aimed at housewives is usually seen as dating from 17 July 1942. On that day 17 housewives, led by Elly Löfstrand, put on a display at Zinkensdamms IP (sports park) in Stockholm. Elly Löfstrand was at that time employed as a physical therapist and as an ergonomist at Konsum Stockholm. Two years later she began to work at Kooperativa Förbundet (KF, the cooperative association) where her role was to disseminate “husmorsgymnastik” across Sweden and abroad.

The success of exercise for housewives lies in the simple and clear message which was directed at a particular target group. The exercises were easy to follow, did not rely on performance or acrobatic movements, instead prioritising a strong core, legs, and feet, whilst also promoting relaxation. It was undertaken during the day, close to home, and with affordable childminding options on offer. The associated outfit – blue trousers and a white blouse – contributed to a sense of being part of a group. Elly Löfstrand based her perspective on contemporary material highlighting the value of presenting exercise for housewives in as enthusiastic, desirable, and well-thought out a way as possible. Elly Löfstrand often emphasised that taking a psychological break from housework was at least as important as physical exercise. If housewives wanted a more advanced form of physical training then that was available to them through regular gymnastics.

According to the historian Britta Lövgren there is a correlation between the emergence of exercise for housewives as a popular movement and the political and social conditions of the 1940s and 1950s, as well as to the 1930s population crisis. Women and housewives were central to a series of political measures that were implemented. It was also during the interwar years that the exercise movement evolved into a people’s movement. Elly Löfstrand’s contributions should also be seen in the light of public propaganda on the subject of fitness. Although exercise for housewives can be viewed as a practical and social movement that was not primarily ideological, it nevertheless did involve public health and ideas associated with ideals of physical appearance, gender roles, and issues particularly related to women.

Elly Löfstrand’s joint membership in KF and SvGF played an important part in the establishment and dissemination of exercise for housewives. She served as the connecting link and its leader. She systematically developed well-subscribed training courses for Swedish and international participants at SvGF’s Lillsved college of physical education (later known as Lillsved Idrottsfolkhögskola). By holding numerous public displays, often in conjunction with other events, the movement gained a lot of ground with the public. One much discussed display involved 5,000 housewives performing in Gärdet, Stockholm during the 1949 Swedish physical education exhibition called Lingiaden. Further, gramophone recordings of exercise classes were also distributed and programmes aired on the radio. From the late 1940s onward Elly Löfstrand hosted Koppla av: Gymnastik för husmödrar and then För oss äldre: Sitta och spänsta on the P1 radio channel.

The membership numbers for KF rose from 17 in 1942 to 60,000 in 1960. Similarly, the number of adult women who joined SvGF increased from 40 percent in 1956 to 55 percent in 1964. This made SvGF the second-largest association within Riksidrottsförbundet (Swedish sports confederation).

In 1944 Elly Löfstrand was awarded the Stockholms Gymnastiksförbund gold medal of merit, and in 1962 she was appointed Sportswoman of the Year in recognition of her outstanding leadership within the sphere of sports which corresponds to the modern Bragdguldet. Yet another award Elly Löfstrand received was the 1963 Svensk Damtidning magazine prize for cultural contributions, thanks to her enthusiasm and energetic role in creating and pursuing exercise for housewives in Sweden, eventually leading it to become a people’s movement.

Elly Löfstrand took large groups on tour to a number of European countries, visited the USA, and was involved in Gymnaestradan, the gymnastic equivalent to the Olympic Games. When interviewed on her return home from these kinds of travels Elly Löfstrand affirmed that many other countries were lagging far behind Sweden when it came to responding to housewives’ needs for physical training and company. The phenomenon of exercise for housewives increasingly became established in a range of European countries during the 1950s.

In the innumerable articles on Elly Löfstrand each one mentions her leadership qualities, describing her as an engaging, charismatic, and clear-spoken champion. In 1942 the Svenska Dagbladet newspaper claimed that it was thanks to her leadership that housewives were encouraged to participate and keep fit “fearlessly and with astonishing energy”.

Elly Löfstrand never married. She died in 1991, aged 77. She is buried at Norra begravningsplatsen (the Northern cemetery) in Täby. 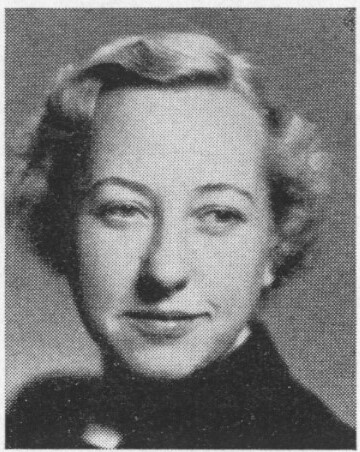