Ellen Wester was born in 1873. She was born into a well-to-do home in Rejmyre, Östergötland. Her father was a doctor and her mother was a lieutenant’s daughter who was of noble ancestry. Ellen Wester’s formal education appears to have been limited to a few years at a girls’ finishing school during the 1880s. A surviving diary from that period, for the years when she was between 12 and 17 years old, reveals that she had a burning interest in the social and literary issues of the day, including women’s emancipation. She also rebelled against the restrictive norms of her day. She appears to have refused to be confirmed within the Swedish church. Her father similarly seems to have refused to allow her to gain her school-leaving certificate. She undertook self-directed study and gained solid skills in several languages, in particular the Slavic ones.

Ellen Wester produced her first translated book in 1891 when she was 18 years old and continued working in this sphere under the pseudonym of E. Weer until her death in 1930. Her career was characterised by an exceptional work ethic and productivity which had no negative impact on the quality of her work. By the time she was 21 years old she had managed to publish translations from five different languages including Polish, and she was in correspondence with Lars Hökerberg – a Stockholm publisher – regarding authors suitable for translation. Her total output in book form comprises over 80 titles, including a large number of translated short-stories printed in the daily press and in journals. Today she is primarily remembered for her translations of Polish literature which she produced directly from the original language. Her expertise in the Polish language and her knowledge of Polish culture appears to have been gained through her connection to the exiled Pole Henryk Bukowski, the founder of the antique shop Bukowski Auktioner, and his sister Maria Geirszyńska in France. During the 1898–1899 period she visited several Polish towns and made a pioneering contribution as a female reporter by submitting a series of articles on Poland to Dagens Nyheter and Lunds Dagblad. Some of these articles have been republished in a 1922 collection entitled Polska brev.

By the time Henryk Sienkiewicz, a Pole, was awarded the Nobel prize in 1905 Ellen Wester had translated both his work and that of the novelist and women’s activist Eliza Orzeszkowa. When the 1923 prize was awarded to another Pole, Władysław Reymont, it was once again Ellen Wester who had translated both Reymont’s work and that of his rival, Stefan Żeromski. She also worked with other Slavic languages such as Russian (Merezhkovsky, Gorky), as well as Czech, and she threw herself into ancient literature: the dialogues of Plato, Marcus Aurelius, and Petronius. Her translations have been reprinted, in modern form, right up to the current day. Generations of Swedish readers have come to know Gorky’s My Childhood through Ellen Wester’s interpretation of the text.

Ellen Wester lived on Vaxholm until her death. Her family had moved there in the late 1880s. She often spent her summers in her childhood home of Östergötland, at her beloved Sillsjö (Rejmyre) farm. She belonged to the intellectual circle which formed around Klara Johanson, with whom she had previously been in a relationship. She was viewed as an unconventional person, who “swore and smoked like a trooper”. She was primarily a hard-working, quality-conscious, professional. The Academy of Sciences awarded her the Letterstedt prize in 1915 in recognition of her translation work and the newly-established Polish republic awarded her the Polonia Restituta order.

Ellen Wester died in Vaxholm in 1930. 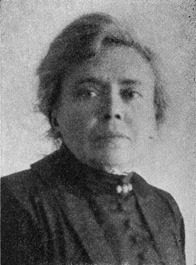