Ellen Hartman-Cederström was the diva of her day at Dramaten (the Royal Dramatic Theatre in Stockholm). She was the best-known and most talked-about Swedish actress of the last two decades of the nineteenth century.

Ellen Hartman-Cederström was born in Stockholm as an illegitimate child, but grew up in relatively good economic circumstances. According to her own accounts she began to dream of the theatre from the time she attended the French school. Despite the opposition of her mother she enrolled at Nya teatern’s children’s theatre run by theatre director Louise Stjernström. She made her debut in 1877 as a 17-year-old in Ernst Lundqvist’s comical one-act play Mellan barken och trädet. Despite her lack of schooling she quickly became a favourite with the audience, but received mixed reviews from the critics. The following year she debuted at Dramaten and was subsequently enrolled in the theatre school.

Ellen Hartman-Cederstöm quickly became noticed for playing several roles as a naïve and innocent girl, the so-called ingénue. Her definitive breakthrough came as the 14-year-old Gurli, a supporting role in Anne-Charlotte Leffler’s play Den räddande engeln in 1883. At that point she had married the actor Victor Hartman, who was also employed at Dramaten. The author Gustaf af Geijersam believed that seeing Ellen Hartman-Cederström portray Gurli was an experience nobody could forget. This character also came to have a significant impact on the young Selma Lagerlöf. In 1886 Ellen Hartman-Cederström became a lead actress and the same year she was awarded the medal Litteris et Artibus by King Oscar II in recognition of her artistic contributions. In 1887 she had another great success with the one-act play I telefon by Victoria Benedictsson. At this point she had become one of Sweden’s most popular actresses and made acclaimed visits to the Nordic capitals, where she was elevated to diva status by her audiences.

Ellen Hartman-Cederström personified a new popular femininity, a winning girlishness. Her character portrayals went against the norms of the day as these restricted girls to shy, unaware and passive roles. She also broke the ruling theatre tradition as regards the ingénue in many other ways, and thus increased the complexity of that particular role. Ellen Hartman-Cederström personified a comical female role who told the truth, was physically active, playful and was interested in erotic. She portrayed these teenage roles with great humour when delivering her lines and in physical scenes she often used stylised movement patterns in a humorous manner. Ellen Hartman-Cederström was perceived as having a very natural demeanour on stage. Research reveals that she altered certain lines of dialogue to more natural discourse, adding in jokes and peppering her roles with humour, for example by excelling in a natural tinkling laugh. She also played more adult roles. She was particularly successful in portraying young, erotically adventurous wives in French boulevard dramas such as Vi skiljas by Victorien Sardou, 1890.

In May 1891 Ellen Hartman-Cederström suddenly left Sweden with a young noble officer, thereby breaking her contract with Dramaten. The reason for their flight was that she wanted to obtain a divorce in order to remarry. She obtained the first but not the latter. It emerged at this time that Ellen Hartman-Cederström had previously had a relationship with her intended’s brother. The scandal gave rise to a storm of gossip and Ellen Hartman-Cederström became the subject of a media frenzy, which described her as a promiscuous woman who had failed to manipulate her way into the aristocracy. Abandoned and disgraced, it was impossible for her to return to Sweden. She went into exile and settled in Paris. There she took lessons from Benoît-Constant Coquelin (better known as Coquelin ainé), who was one of France’s most talented and popular actors. He employed her on his tour to Russia and Scandinavia in the spring of 1892. In March 1892 Ellen Hartman-Cederström returned to Stockholm and performed as a French-speaking actress in Coquelin’s theatre- group. Back in Pairs she trained at the Conservatoire and then in the spring of 1893 became employed at the Théâtre de Vaudeville. During her time in France she studied the classical French acting style and use of language and learned to master the strict French theatrical tradition with regard to the role of the ingénue. When she later returned to Stockholm, however, she reprised her old, more rollicking and comical acting style.

Her visiting tour in Stockholm with Coquelin ainé made it apparent that her return to the city was possible, despite some protests of moral indignation made in conservative newspapers such as Smålandsposten. In November 1893 Ellen Hartman-Cederström returned to Dramaten as a guest actor until February the following year. She tried to broaden her repertoire by playing a darker and more dramatic character as the lead role in Froufrou by Henri Meilhac and Ludovic Halévy, but this garnered some negative reviews. Her guest performances attracted audiences to Dramaten and the theatre was fully-attended for almost all of the 58 evenings that she performed. She subsequently went on a tour of Swedish towns. In the autumn of 1894 she returned to Dramaten and in 1895 she resumed her employment there – although this decision led to internal disputes at the theatre as the employees had divided opinions on her. The same year she had her greatest success in the French comedy Madame Sans-Gêne by Victorien Sardou. As she was a so-called audience magnet the theatre directors used her extensively and often adapted the repertoire to fit her talents. Throughout her career, but particularly during the 1890s, she was a major contributor to Dramaten’s financial success. The so-called “Ellen Hartman-repertoire” became heavily criticised by some reviewers such as Emil Grandinson and Tor Hedberg, despite its popularity with the audiences.

In 1898 Ellen Hartman-Cederström ended her career by marrying the baron and cavalry captain Bror Cederström and settling in Malmö. She was ostracized from Scanian society during her early married years due to the earlier scandal and her former profession, which at that time was seen as unrespectable. However, after a few years she became accepted and formed a friendship with her sister-in-law, lady of the castle Henriette Coyet of Torup, who held an elevated position in the Scanian upper nobility and was also an influential person in Scanian cultural life. Despite having left the theatre Ellen Hartman-Cederström retained her status as a celebrity and was frequently mentioned in the press.

In 1920 she made a comeback at Dramaten in Madame Sans-Gêne under the name of Ellen Hartman-Cederström. What had originally been individual guest performances became recurring reprisals of her greatest successes. According to her own accounts she was asked at this point to take on leadership of Dramaten. She also performed a few new roles, including Märtha Dohna in the silent movie Gösta Berlings saga adapted from Selma Lagerlöf’s novel under Mauritz Stiller’s direction. She played opposite Greta Garbo in the latter’s breakthrough role. Ellen Hartman-Cederström’s voice can be heard on a tape recording of the telephone conversation which was her opening monologue in I telefon.

Remark : Ellen Hartman-Cederström was first known under her maiden name, Ellen Hedlund. In 1881 she married for the first time and changed her name to Ellen Hartman. After her second marriage in 1898 she came to be called Ellen Cederström. In later reference books she is often found under the name Ellen Hartman-Cederström. In the Swedish bibliographic database LIBRIS her entry is entitled Hartman, Ellen. When searching for information on her in the older press it is important to use the name that she was using at the time. 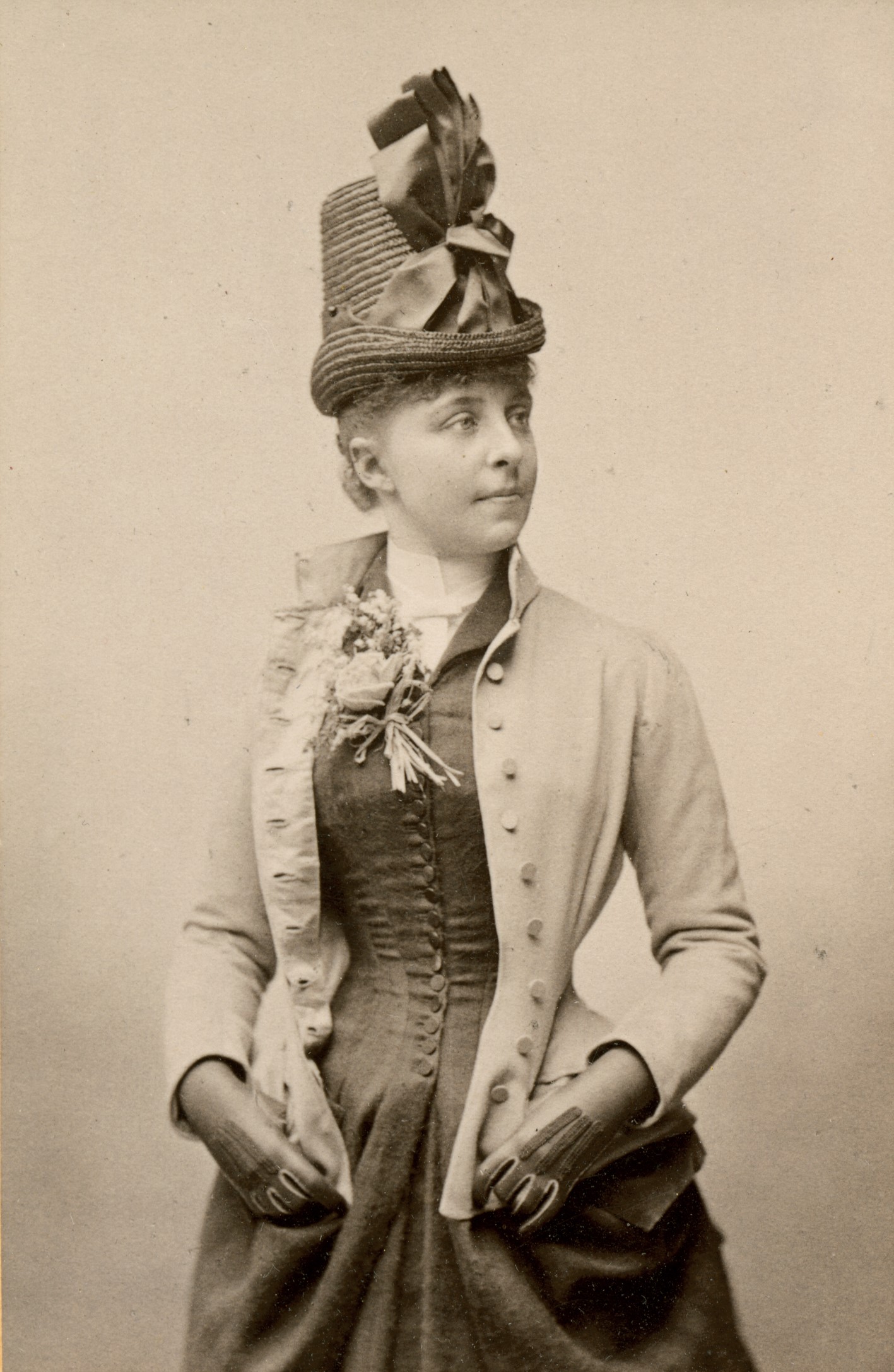