Elise Sahlqvist was a hat manufacturer, active around the turn of the century 1900. Her modern views on women’s work awoke much attention from her contemporaries.

Elise Sahlqvist was born in Örebro in 1843 where she also grew up. She was the daughter of Maria Christina Sahlqvist and her husband Lars Sahlqvist, a merchant. She had three sisters and three brothers, of whom two younger brothers died when they were only aged about one. It is unknown what education she was given, but it seems to have been a good one. Her leisure time during her youth was spent on traditional middle-class women’s activities like crochet and embroidery as well as music and literature.

The Sahlqvists were a well-off and typical merchant and entrepreneur family. The latter was an inheritance that the daughters carried on. Elise Sahlqvist’s oldest sister Hilda Christina married Adolf Bergöö, also a merchant, and among their children was Karin Larsson. Elise Sahlqvist’s second sister, Ida Carolina, married Fredrik Georg Pripp, a wholesaler, and her third sister, Maria Augusta, married Rudolf Gagge, a bank director. Elise Sahlqvist’s one surviving brother Hjalmar Theodor, five years younger than herself, was an accountant in Stockholm. He tragically committed suicide by drowning himself near Liljeholmsbron in Stockholm in 1868, together with a woman.

Elise Sahlqvist never married and had no children. After her father’s death in 1862, she lived with her mother in the family apartment in Örebro until they both moved to Hallsberg in 1874. Her sister Hilda Christina and brother-in-law Adolf Bergöö were already living there with their family. Their exact living arrangements are unknown, but it is evident that Elise Sahlqvist, her mother and the Bergöö family lived very close to each other in Hallsberg.

It was not long before Elise Sahlqvist actively sought some kind of employment that could provide an income. Her brother-in-law Adolf Bergöö tired in the end of her idleness and the fact that she did not find a husband. He explained that she as an unmarried, childless and mature woman had an obligation to fill her life with something meaningful in the form of work. Elise Sahlqvist rose to the challenge in due course, and started by trying chicken breeding. Her interest soon turned to local home industries in the Hallsberg district, however: straw braiding and making straw hats. It was mainly women among the cottagers and servants who were occupied in this industry. In 1880, the production of braided straw in the district was estimated to constitute the material for the annual production of 4,000 hats.

Elise Sahlqvist acquired detailed knowledge of straw braiding and the manufacture of straw hats. At the end of the 1870s, by means of her wide contact net, she started the sale of larger stocks of braided straw from Hallsberg to the hat manufacturers in Stockholm. Soon she also started her own hat manufacturing on a smaller scale, and the demand for her hats increased steadily. By the mid-1880s, she had doubled the local production of braided straw in the Hallsberg region, which probably stimulated her to expand her enterprise. In 1887, she started a straw hat factory in Hallsberg. She simultaneously opened a shop in the same town, probably to sell her straw hats.

The hats from the factory in Hallsberg were mainly sold in Stockholm, Gävle and Malmö, but single customers also existed in many different places around Sweden and even abroad. Elise Sahlqvist and a couple of her employees travelled annually to Paris and other big cities in Europe to keep pace with the changes in fashion and to bring home ideas for new hats in the latest fashion.

The organisation of the work in Elise Sahlqvist’s hat factory aroused the attention of her contemporaries. It was for example highlighted in the obituary in Idun after Elise Sahlqvist’s death. Her leadership philosophy was characterised by the idea that all the work tasks at the factory that could be carried out by women were to be given to women. This resulted in administrative assignments as well as the manufacturing being looked after by women. Some of the tasks at the factory were however done by men, such as the work of caretaker and the thermoforming of the hats. In 1890, 85 per cent of the workforce were women. The company seems also to have been the first in Sweden to allow women to become commercial travellers, abroad as well as in Sweden, which created somewhat of a sensation. In 1900, four women were employed in that capacity, but women commercial travellers had existed in Elise Sahlqvist’s company right from the start of the factory in the 1880s.

Elise Sahlqvist took good care of her workers, and she was much respected by them. She offered comparatively good wages, she saw to it that the working premises in the factory were light and spacious, she handed out presents and arranged staff parties. As an explicit example of her genuine concern for her staff may be mentioned the fact that she even organised extra trains and free tickets for her workers to attend her own funeral.

In the 1890s, Elise Sahlqvist, her mother and two cousins moved into their new home, Sannalund in Hallsberg, and for her own recreation she bought Villa Vestråt in the fishing village of Fiskebäckskil on the west coast in the mid-1890s. The villa had earlier belonged to the Dramaten star actress Elise Hwasser. The Bergöö family and her niece Karin Larsson with her husband, the artist Carl Larsson also stayed in Fiskebäckskil now and then.

Elise Sahlqvist never had herself painted or photographed as an adult. She is however to be seen in a mural by Carl Larsson in the Bergöö villa in Hallsberg, and also in a watercolour by her brother-in-law Rudolf Gagge. In both these works of art, Elise Sahlqvist is seen with hats, on her head as well as in her hands, and her face is hidden by broad hat brims in both paintings.

Elise Sahlqvist died of stomach cancer in 1904. She was buried at Hallsberg country church. At her death, she was a wealthy woman and the greater part of this fortune was willed to her nephew Per Bergöö, who, like his father, was a merchant in Hallsberg. Her factory was run after her death by the director, Charles H Sande, and manufactured uniform caps. The factory was however destroyed by fire in 1964 after which all manufacturing came to an end. 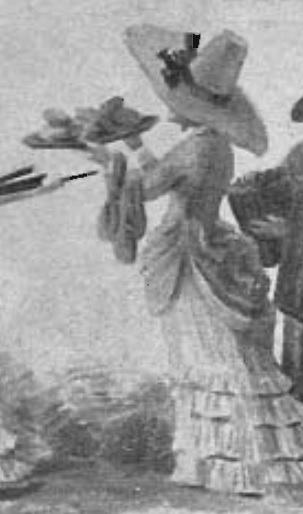 Detail of watercolour painting by Rudolf Bagge, 1883, depicting Elise Sahlqvist, on of only two known depictions of her. Photo: B Hakelier, 1883 (printed in Kumla Julblad, 1964)