Physicist, professor who formulated the theory of nuclear division

Lise Meitner was a physicist who, along with her nephew, Otto Robert Frisch, came up with the theory of nuclear division leading to the development of both nuclear power and the atom bomb.

Lise Meitner was born in Vienna, Austria in 1878. She trained to become a French teacher and then undertook further studies in philosophy, physics, and mathematics at Vienna university from 1901–1905. In December 1905 she defended her thesis on the thermal conductivity of inhomogenous material with a focus on the connection between these materials’ electrical and thermal conductivity.

At that time women were not allowed to carry on researching at the university once they had gained their degree. This was very frustrating for young Lise Meitner who was determined to deepen her studies in radioactivity. When she realised that Berlin was the seat of modern atomic research she convinced Max Planck to allow her to attend his quantum theory lectures. He agreed, subject to availability. Male researchers and students had priority, however.

Lise Meitner wanted to undertake research as well and she was eventually offered a place with Otto Hahn at Humboldt university’s new radiochemistry laboratory. In 1907 she became a researcher, collaborating with Otto Hahn at the chemistry department. They formed a successful research team which, from 1912 onwards, developed activities at the Kaiser Wilhelm Institut für Chemie (KWI), which had been established the previous year. Lise Meitner published a large number of articles, several of them together with Otto Hahn and in 1917 they identified the fundamental element of protactinium, against the background of the ongoing First World War. In 1922 Lise Meitner became the first person to be appointed professor in theoretical physics. When the world’s leading 43 nuclear physicists gathered for the 1933 Solvay conference in Brussels there were only three female participants present: Marie Curie, Irène Joliot-Curie, and Lise Meitner.

Lise Meitner served as professor in physics at the Kaiser Wilhelm Institute für Chemie in Berlin until 1938. On 12 July that same year she was forced to leave Germany due to her Jewish ancestry. She then came to Sweden, largely thanks to her friend Eva von Bahr-Bergius. They had come to know each other in Berlin in 1912 and had been research colleagues for a few years. They had a deep and uncomplicated friendship, partly due to their disparate political views. Lise Meitner’s nephew, Otto Robert Frisch, had been forced to leave Germany in 1933 already and by 1938 had been working at Niels Bohr’s institute of physics in Copenhagen for some time already.

Lise Meitner lived in Stockholm until 1 September 1938 and had a desk at Manne Siegbahn’s Nobel institute of physics, which had been established in 1937. Lise Meitner experienced the difference between the centre and the periphery personally during her early days in Sweden, where she was both one of the world’s leading nuclear physicists and a stateless refugee. In Sweden she lacked not just instruments but also possibilities of professional dialogue. Yet, when invited to join the Manhattan project, set up by the USA, Great Britain, and Canada, she rejected it. The experiences she had gained serving as an X-ray nurse and seeing the debilitating effects of nerve gas during the First World War had turned her into a pacifist.

Lise Meitner had started a project at KWI – for which she persuaded Otto Hahn to become part of the team – in 1934, inspired by Enrico Fermi’s irradiation of chemical elements using slow neutrons. Her work within that team was suspended when she was forced to leave Germany. As a refugee, during the autumn of 1938 she was only been able to participate from a distance in ongoing work but she was able to travel to Copenhagen where she discussed current research with Otto Hahn and Niels Bohr. Lise Meitner and her nephew Frisch were going to host Eva von Bahr and her husband Niklas Bergius in Kungälv over the Christmas and New Year’s weekends in 1938. Before she left Stockholm for the holiday period Lise Meitner received a letter from Otto Hahn summarising the results of an ongoing joint research project. He could not interpret the results: when uranium was irradiated barium was created.

Once they were both in Kungälv both Lise Meitner and Otto Robert Frisch took a break from celebrating the festivities and went out into the winter landscape. Throughout the entire walk the conversation concerned Otto Hahn’s letter and his summarised results. With reference to Niels Bohr’s thoughts on the atomic nucleus as a drop which can be stretched out and divided Lise Meitner calculated which energies would become available at such a division and she concluded that the electric repulsion between the two fragments would generate circa 200 MeV energy. Both she and Frisch realised that this was a revolutionary new piece of knowledge and it was imperative that they checked that her calculations were right before they could publish their findings.

Their response to Otto Hahn was brief, indeed so brief that he and his colleague Fritz Strassman were able to publish in the German Die Naturwissenschaften without having clarified all the calculations. Lise Meitner and Otto Robert Frisch’s publication in the British Nature was delayed due to editorial reasons but the calculations were correct, which was highlighted by the world’s leading physicists including Niels Bohr when they nominated Lise Meitner for the Nobel prize. Since 1924 Lise Meitner had been nominated on 15 occasions – the majority of nominations had originated from Max Planck, often in conjunction with Hahn. Nevertheless, she never did receive the Nobel prize, although the now publicly released Nobel committee protocols reveal that the discussion of possible candidates between 1939 and 1944 were based on the two publication dates. The interjections of leading international physicists such as Niels Bohr, Arthur Compton, James Franck, and others, were ignored and Otto Hahn was awarded the Nobel prize in chemistry in 1944 “for his discovery of the fission of heavy atomic cores”.

Although the reasons for blanking Lise Meitner are shrouded in the dark, the chemist Theodor Svedberg believed that “it was hard to determine the significance of uranium despite it doubtless being of fundamental importance”, 1939. Manne Siegbahn joined the discussion the following year and it was mutually decided that only Otto Hahn should be recognised for the discovery.

On 6 and 9 August 1945 atom bombs were released over Hiroshima and Nagasaki. The impact of these bombs shocked the whole world. Lise Meitner, who was on holiday in Dalarna at the time, was sought out by the press. A request from the USA arrived stating that Mrs Eleanor Roosevelt hoped to interview Lise Meitner on the radio. This was done via a studio in Leksand and it was the first time such a radio link was achieved across the Atlantic ocean.

Lise Meitner had obviously been disappointed at not being awarded the Nobel prize, but she found the reports from the concentration camps even harder to take, along with the general behaviour of the Germans during the Second World War and the devastating results of the atom bombs in Hiroshima and Nagasaki. Prime Miniser Tage Erlander was one of those who reacted to the Nobel committee’s unfair treatment of Lise Meitner. He was responsible for setting up Atomkommittén (the atomic committee) which decided to award her a professorship and a laboratory at the Kungliga Tekniska högskola (KTH) (royal institute of technology) which meant that Lise Meitner could leave Manne Siegbahn’s institute. She became an advisor on the project to build Sweden’s first subterranean reactor and served as scientific expert in the state-run atomic energy programme. When Tage Erlander invited her to accept Swedish citizenship – whilst ensuring that she could also keep her Austrian one – she decided to accept this invitation in 1949. For the ensuing decade she was a frequent speaker on both sides of the Atlantic ocean and was given a series of prestigious prizes and awards. She retired from KTH in 1953.

In 1955 Lise Meitner was appointed Foreign Member of The Royal Society in London. In 1960 she moved to Cambridge where her nephew Otto Robert Frisch was a professor at Trinity College and at Cavendish Laboratory.

Lise Meitner never married or had children. She died in 1968 and was buried, according to her wishes, at the St James parish church cemetery in Bramley, Hampshire, near her brother Walter who had died in 1964. The inscription on her grave reads: “Lise Meitner: a physicist who never lost her humanity”. In 1997 the element of Meitnerium 109 was named after her. She is the only woman who has been honoured with a statue outside the Humboldt university in Berlin. It was raised in 2014. 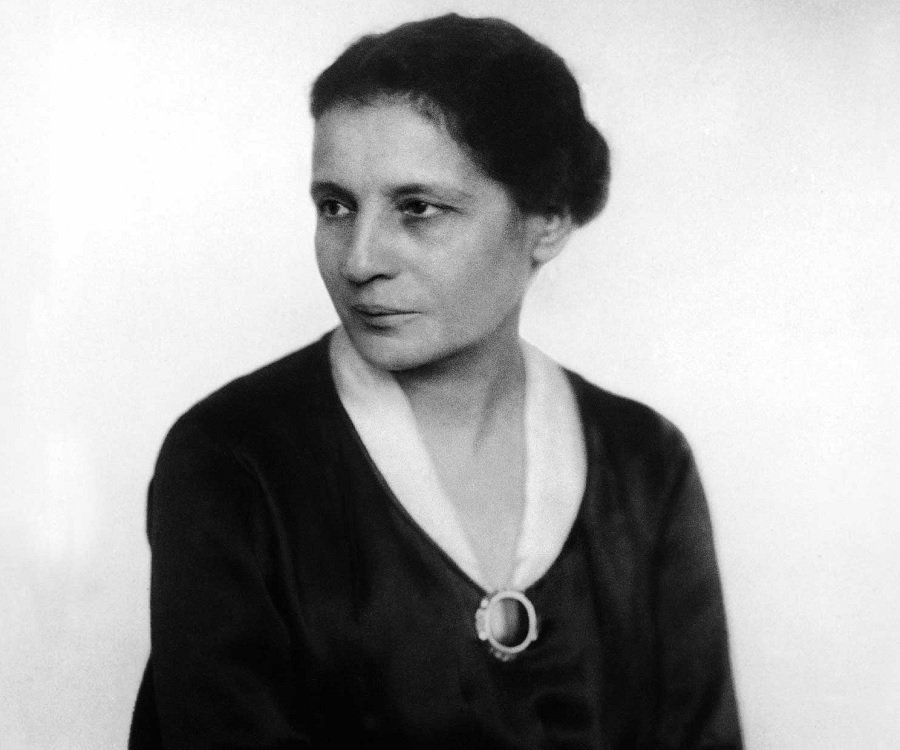