Princess of Sweden, duchess of Mecklenburg, proponent of Lutheranism

Princess Elisabet was a princess of Sweden and duchess of Mecklenburg. She was active in consolidating Lutheranism in Sweden and seems to have been the most politically active of Gustav Vasa’s five daughters.

Princess Elisabet was born in 1549 as the next youngest child of Gustav Vasa and his second wife Margareta Leijonhufvud. She grew up in a sibling group with three older brothers and four older sisters. Princess Elisabet would however always be closest to her younger brother Karl, later Karl IX. When she was two, her mother died and she was brought up instead by her step-mother Queen Katarina Stenbock, her maternal aunts Märta and Brita Leijonhufvud, and Kristina Nilsdotter Gyllenstierna. Princess Elisabet and her siblings would during their childhood and youth live mostly at Stockholm Castle and Gripsholm Castle.

Princess Elisabet’s marriage was a political concern that led to conflicts in the royal family. In 1562, her brother Erik XIV started marriage negotiations with Kristoffer of Mecklenburg on her account. She was then 13 years old and her prospective husband was almost twice as old. On account of Princess Elisabet’s age, it was decided that the marriage would first take place a few years later. The year after, Kristoffer was however imprisoned in Poland, where he was to remain for six years, and the engagement was broken off. Erik XIV’s successor, Johan III, was more sympathetic to Roman Catholicism than his brother and searched for a Catholic husband for Princess Elisabet. Several Italian candidates were to the fore and the widowed French Queen Catarina de Medici was interested in having her as her daughter-in-law. Princess Elisabet was herself a convinced Lutheran and wanted a protestant husband. She seems to have preferred a less prestigious prince to converting for the sake of a wealthier Catholic prince. She protested therefore against the marriage and would continue to live unmarried for quite some time after that.

As unmarried, Princess Elisabet lived at the court of Johan III and acted as her brother Duke Karl’s tutor. She also often had to bring up issues with the king for the siblings living abroad, and has been described as the family’s centre of communication for all information. She appears also to have been the leader among the five Vasa sisters in the family power struggles. There are indications that she participated in the conspiracy against Johan III in the autumn of 1573. The people thought to lie behind the conspiracy were at least guests of Princess Elisabet strikingly often during the year. That autumn alone, that group of people met more than 20 times at her home. During interrogations, the presumed leader of the conspiracy, Charles de Mornay, divulged that they had considered raising Princess Elisabet’s dowry from 100,000 daler to 150,000 daler, which would give her the possibility of a better choice of partner to marry. She thus had her own economic reasons for supporting or participating in the conspiracy against Johan III.

Princess Elisabet’s former fiancé, Kristoffer of Mecklenburg, contacted the Swedish king concerning this marriage when he was released from Polish imprisonment, but received a negative answer. Five years later, he made a new attempt. Despite the fact that Kristoffer’s political and economic position was very uncertain, Princess Elisabet insisted on resuming marriage negotiations. In 1581, almost 20 years after their first engagement, the couple were married. The wedding plans mirror the royal family’s continued religious conflict. The Lutheran princes whose presence Princess Elisabet and her brother Karl wanted were not invited, despite reminders to Johan III, and she monitored the wedding ceremony to see that the king did not smuggle any Roman Catholic rites into it. After the marriage, the couple moved to Mecklenburg, and lived chiefly in the city of Gadebusch. Their only child was born there, their daughter Margareta Elisabet, in 1584.

Princess Elisabet had seen her older sisters Cecilia's and Sofia Vasa's economic vulnerability. During her marriage negotiations she was therefore careful not to land in a similar situation herself in the future. Despite that, her life would also be shadowed by economic worries. Neither her brother Johan III nor her husband Kristoffer lived up to the economic compensation that she had the right to according to the marriage contract. She was therefore to make efforts several times to acquire various appointments for her husband that would contribute to their economic provision.

Princess Elisabet was widowed at the beginning of 1592. Her husband’s relatives in Mecklenburg refused her any proceeds from her fief, and made life difficult for her in various ways. Later the same year, she found herself impelled to return to Sweden with her daughter. In Sweden, after having fought for her own cause for a time, she was given Norrköpingshus and four districts in the province of Östergötland as a fief. The fact that the Crown had solved her sister Sofia’s economic support previously was used as an argument for doing the same for Princess Elisabet, as was the fact that despite her ten-year long marriage, she had only received half of her dowry from Sweden.

Princess Elisabet’s estate inventory shows that she was a well-read person with a great interest in edifying Lutheran literature. She corresponded with learned persons, among them the historiographer and professor of theology David Chytraeus. On her initiative, the mainstay of the Lutheran system of belief, the Augsburg Confession, was translated and published in Swedish. During her whole life, she worked for the cause of converting the Swedish royal house to Lutheranism and she allied herself continually with her younger brother Duke Karl, who shared her religious convictions. She was never to see Karl’s accession to the throne.

Princess Elisabet died unexpectedly in the autumn of 1597, only 48 years of age. She is buried in Uppsala Cathedral. 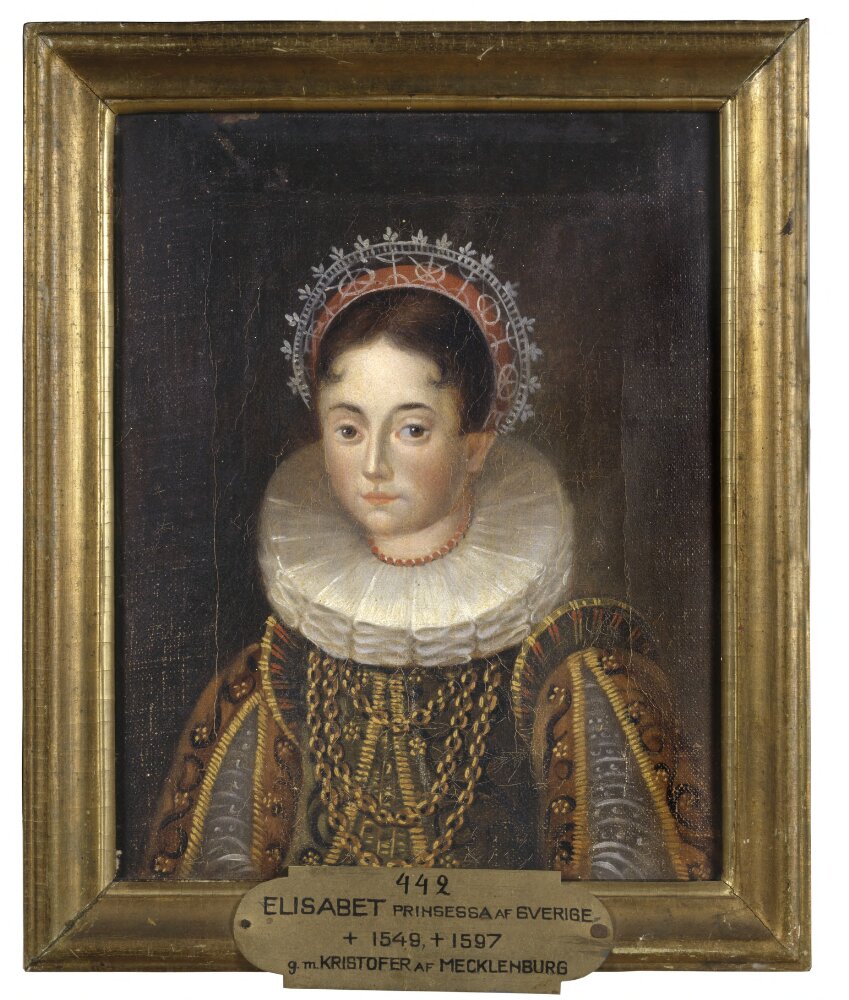