The author and journalist Elin Wägner was a pioneer in a number of areas: she was an early activist in the women’s movement, a pacifist and an environmental campaigner. She was the second woman to be elected into the Swedish Academy. Her career as a writer of fiction spanned four decades and she received great praise from both reviewers and readers.

Elin Wägner was born in 1882 as the daughter of a school headmaster in Lund. The following year her sister Ester was born, and two years later her brother Harald. Like Elin Wägner, her brother Harald became a journalist and an author. Their mother died after giving birth to Harald, and their father subsequently remarried. Elin Wägner felt more at home in her maternal uncle’s home, a priest’s farm in Småland, than she ever did in her father’s new home. Despite this, she accompanied her father and his new family to Nyköping and later to Helsingborg. Elin Wägner’s first period as a journalist was at Helsingborgs Dagblad. She then moved to Stockholm and worked at Idun, a well-reputed bourgeois weekly journal with an extensive female readership. It was not until she became involved in Tidevarvet, the journal of the female collective known as Fogelstadsgruppen, that she fully developed her focus on women’s issues and a female readership. Elin Wägner was the journal’s first editor and its most prolific contributor. As such she wrote about German- and English-language literature, for instance on ethnological and anthropological research.

Elin Wägner had a particularly strong interest in philosophy and the history of religion. In the 1930s she and Emilia Fogelklou, a religion historian, studied Das Mutterrecht, written by legal historian J J Bachofen in 1861, which divides cultural development into three phases according to evolutionary theory. The basic cultural level was living in a group. This group-oriented phase then developed into a stage where women held significant influence. According to Bachofen this secondary phase, called matriarchy, was replaced by patriarchy in a final reversal, completing the stages of cultural development. Elin Wägner did not share Bachofen’s conclusions.

Elin Wägner was further inspired by Mathilde Vaerting’s Männerstaat und Frauenstaat, 1922, which describes the search for prehistoric matriarchal societies. That matriarchies had existed proved that the current patriarchy was neither an essential nor a natural ordering of society. In an article in Tidevarvet, 1930, Elin Wägner recommended the book to those who were interested in the historical background of the struggle between the sexes. Further evidence that she had found that book important can be seen in her autobiographically tinged novels Genomskådad, 1937, and Hemlighetsfull, 1938, where her alter ego is encouraged to read the book as she searches for historical arguments to support the women’s movement. Vaerting asserts “that the differences between men and women in character, manners, strength, and area of work are not immovable and are not the causes of the current power relationship between the sexes but are, rather, a result of it”. This view must be interpreted as a dismissal of essentialism and an adoption of constructivism, that is, a rejection of differences in favour of similarities. Simone de Beauvoir’s credo from 1949, “One is not born a woman, one becomes a woman”, is already expressed here. This was also a conviction that Elin Wägner herself held, despite later feminists’ wide-ranging discussion of her actual stance on the matter.

Further to her cultural historical and political interests, Elin Wägner dedicated most of her life to writing fiction. She made her debut with Norrtullsligan, 1908, and became a success with the public with Pennskaftet, 1910. Both novels have female characters at the centre of their stories – the first office workers, the second a female journalist. Like Elin Wägner herself, her alter ego Pennskaftet becomes active in the struggle for women’s suffrage. She did not allow this activism to take over her life, however. Pennskaftet even gets married at the end of the novel. So too did Elin Wägner the same year that the novel was released. Pennskaftet declares that she will carry on working after getting married, as did her creator. Elin Wägner formed a sort of marriage-between-friends with the philosopher and critic John Landquist. This is perhaps why they never had children. Even after their divorce in 1922 they remained supportive of each other’s work. When Landquist wrote about Elin Wägner’s novels as a literary critic he wrote with an insider’s knowledge.

Elin Wägner’s interest in the women’s movement did not end when suffrage had been won. Gaining civil rights entailed obligations and Elin Wägner demanded that women should make use of their newly won rights. According to her, they had a particular responsibility to work for peace both on earth and with the earth. After the First World War Elin Wägner was active in the post-war reconstruction and aid projects around Europe. Den förödda vingården, 1920, and Från Seine, Rhen och Ruhr. Små historier från Europa, 1923, are both testament to her international activism. Elin Wägner was also involved in setting up Rädda Barnen (Save the Children) in Sweden in 1919. She had already begun travelling abroad in 1915 when she attended a peace conference in The Hague. The following year she sharply criticised warmongers and the war industry in her viciously satirical novel Släkten Jerneploogs framgång, 1916. The surname associated with iron and machinery was aptly suited for a family which profited from war. Twenty years later Elin Wägner was still active in this sphere as evidenced by her attendance at the “Kvinnornas vapenlösa uppror mot kriget” (women’s unarmed unrest against the war) demonstration of 1935. Despite, or because of, being forced to live through two World Wars Elin Wägner’s pacifism remained unbroken and supported by her membership in the Society of Friends, or the Quakers.

Ulla Isaksson’s and Erik Hjalmar Linder’s two-volume biography of Elin Wägner, published in 1977 and 1980, reveals information on Wägner’s private life. It tells not only of her extensive and wide social activism, but also of new directions in her life. After divorcing Johan Landquist, Elin Wägner moved out of the capital city and to the Småland countryside. She had a house named Lilla Björka built in her mother’s home region, north of Växjö in the village of Berg, and spent the rest of her days there. The house is now owned by the Elin Wägner company. It contains parts of her private library. Other parts of the library can be found at St. Sigfrid college.

Småland was not just Elin Wägner’s home region; the landscape had already served as an important basis for her writing before she moved back. Åsa-Hanna, 1918, is one of Elin Wägner’s most read novels. The Småland environment constitutes the background to several of her religiously-existential novels of the 1920s. One of them is Den namnlösa, 1922, which is viewed as a sequel to Åsa-Hanna. Characters from earlier works often reappear and are more fleshed-out in later books. For example, the teacher Maria first appears in the Småland-based novel Svalorna flyga högt, 1929, but also in later novels. Career women are very compassionately portrayed, as are women running country households and priests’ farms.

During the 1930s Elin Wägner returned to the women’s movement in her novels. Dialogen fortsätter, 1932, is viewed as her most outspokenly feminist novel. She was, however, not a radical feminist. As the title of the novel implies, Elin Wägner wanted women to be heard in a dialogue with men. The novel ends with the female lead character blowing a kiss to that male bastion, the parliament, and shouting: “The ball is in your court”. It was not just the women’s movement that was considered in the novel. Given the threat of an impending war she made one of her lead characters a determined pacifist.

As the years passed, Elin Wägner also became more involved in matters relating to the environment. At the end of Väckarklocka, 1941, possibly her most influential book, she lists the basic needs of humanity, such as clean water and unpolluted air and soil. Väckarklocka can be classified as an eco-feminist work long before such a concept even existed. Elin Wägner’s environmental concerns predate Rachel Carson’s Silent Spring from 1963 and also permeate her concept book Fred med jorden, 1940. Her regional landscape book Tusen år i Småland, 1939, is written in the same spirit. She obtained information for the book by traversing the area by bike along with her friend Flory Gate. Elin Wägner’s last novel, Vinden vände bladen, 1947, is also about a thousand years in the region and she describes life in the various eras. Popular folk myths are mixed with thoughts on modernity and its effects. The people of Småland milk with the help of both magical rhymes and modern milking machines. Elin Wägner has been characterised as anti-modern, but she was only really opposed to certain aspects of modernity, such as technological advances in the arms industry and modern agriculture, which makes use of artificial fertilizers.

Despite Elin Wägner’s political activism, which at times pulled her away from her more literary writing, it was her output as an author of fiction which awarded her the greatest triumph. Selma Lagerlöf was a significant role model for Elin Wägner who, after Lagerlöf’s death, took on the task of writing her biography. She produced a two-volume set which was published in 1942 and 1943. It is probably this work which led to Elin Wägner being awarded a place in the Swedish Academy in 1944. She was given Hans Larsson’s place in the Academy, in a move which can be seen as compensation for her own frustrated dreams of wanting to read philosophy in her youth. In her inaugural speech she revealed great insight into her predecessor’s work.

Elin Wägner died in Rösås, Kronoberg county, in 1949. She is buried at Norra kyrkogården (The Northern Cemetery) in Lund. 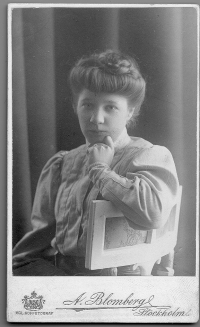