Ebba Holgersson was the sole full-time teacher to work at the Kvinnliga Medborgarskolan (women’s civic school) at Fogelstad from 1925–1954. She is often overlooked in articles discussing the so-called “Fogelstad group”, namely Kerstin Hesselgren, Ada Nilsson, Elisabeth Tamm, Elin Wägner, and Honorine Hermelin. The principal at Fogelstad, Honorine Hermelin, nevertheless appreciated the value of her colleague and believed that “without Ebba there would be no school here /…/ she is irreplaceable”.

Ebba Holgersson was born in Karlskrona in 1885. She was the child of city worker Nils Holgersson and his wife Augusta Karolina, née Nilsson. According to the family history an ancestor from Småland had served as a district judge and the steward of the local area. Further, the family history told of strong bonds forged between female members across the generations of the family. In Ebba Holgerson’s immediate family she had been preceded by four brothers, although Gustaf, born in 1884, died an infant. A few years after her own birth another brother joined the family, and he too was give the name Gustaf.

After completing three years of training at Karlskrona technical college Ebba Holgersson then spent 1904 training as a junior-school teacher in Ronneby. When she was 19 years old she moved to Mölleberg to work at its “permanent junior school” just outside of Vång, and then two years later she worked at another permanent junior school in Vång – her father’s home area in Hjortsberga parish, Blekinge. In 1926 Ebba Holgersson became a public-school teacher in Vång and it was not until 40 years later that she returned to Karlskrona. She spent most of her adult life living with Edit Paul, who taught at Övre Vång public school.

Working as a teacher as well as a child welfare officer in Vång made Ebba Holgersson familiar to the local children. She pointed this out at her 60th birthday, noting that she had drawn the younger generation towards her through her teaching whilst the older generation came to her through her poor relief efforts. She viewed these experiences as preparing her for her work in the “wider world”, by that she meant Kvinnliga Medborgarskolan at Fogelstad as well as other educational and social organisations and the various talks she gave on the issue of democracy. She herself never lived at Fogelstad but remained in her home area and thus kept her job and maintained a connection with the political reality.

Ebba Holgersson also spent around twenty years teaching public interaction techniques to younger nurses in Stockholm as well as social studies at Svensk sjuksköterskeförenings högre utbildning (Swedish nurses’ association advanced training programme) and on training courses run by Socialförbundet for directors of children’s homes and of homes for the elderly.

Ebba Holgersson is one of Blekinge’s most notable women who gained her practical experience through the various posts she held which placed her in a rare position to help revitalise the municipality – a teacher of rank who specialised in civic knowledge. She became known throughout Blekinge for her teaching efforts as well as for instigating and setting up the Blekinge county child welfare association in 1926, the first such enterprise in Sweden, and for which she served as chair for eight years. Ebba Holgersson’s range of activity extended beyond local perimeters – “all of Sweden formed her domain” thanks to her nationwide involvement in courses and talks. She specialised in social welfare, her talks were often entitled “From beggar’s permit to social welfare”, but she was also well-versed in and could explain complex legal matters and decipher dense legalese. Her talks not only aroused the public’s interest but were also generally accessible thanks to her comprehensive training in the humanities and in political matters. This was particularly true of her emphasis on the so-called “Vänskapslagen” (friendship law) – putting it into practise meant “carrying it within your heart as a living and real thing”. She was always willing to give of her time and her energy.

The first-ever women’s political association, Föreningen Frisinnade Kvinnor (FFK, association of Liberal women, which later became Frisinnade Kvinnors Riksförbund, FKR) encompassed the themes of feminism, liberalism, and pacifism in its remit. Ebba Holgersson served as chair of the Blekinge branch, where she was extremely supportive of public sobriety and believed that the “sobriety question” should be considered in conjunction with other major social issues.

Ebba Holgersson’s involvement in the women’s suffrage movement also involved an early element of responsibility. She served as chair in Föreningen för kvinnans politiska rösträtt’s (FKPR, association for women’s suffrage) Vång branch, which was itself a branch of Ronneby FKPR. It was during a visit of Augusta Tonning, another remarkable Blekinge woman, in 1915 that the association was formed – “through snow and drifts for the cause of suffrage” – and named Johannishus FKPR, and its motto was “Know your duty”. After the association joined up with Landsföreningen för kvinnans politiska rösträtt (LKPR, national association for women’s suffrage) Ebba Holgersson became a member of the central steering committee. She stayed in touch with Augusta Tonning and also became friends with Ellen Key.

Once voting and civic rights had been extended to women they then needed to learn how to use these new-found rights. In 1922 around 30 members of FFK – including Ebba Holgersson – gathered to participate in a 4-week long so-called “Basic Course” held at the Fogelstad property in Sörmland. It was not until 1925, however, that the enterprise known as Kvinnliga Medborgarskolan at Fogelstad actually got going. Open to all women, it aimed to provide them with the necessary self-confidence and inspiration to fight for women’s rights.

A correspondence and friendship had already arisen between Elin Wägner and Ebba Holgersson by the autumn of 1923 and Elin Wägner came to Blekinge to give a talk on “The idea of the weaponless rebellion”. Later Ebba Holgersson was in her turn asked to travel to Berg to help lead local politically active women. Ebba Holgersson prioritised collaboration and trust as integral elements of society and that these approaches to life had to be learned. She viewed living in a community as “a major, difficult, yet fun skill”. She emphasised the practical application of an individual’s significance and the struggle for a classless society where everyone is of equal value and bears equal responsibility.

The participants on the longer summer courses held at Kvinnliga Medborgarskolan at Fogelstad were registered in the imaginary municipality of Komtemåtta within which they were all given various roles. It was Ebba Holgersson who came up with the fictitious municipality which she treated as a pedagogical concept, a bit like modern-day “role-play”. She embodied the role of “Director Holgersson” on every course whilst all other roles were parcelled out to various participants, using this role-play to practise public interaction and debating skills and how to take minutes and keep to a budget. Indeed, articles were also written for Komtemåtta-kuriren (the fictitious local paper) and for a magazine called Långsikt och Närsynt. Participants, who dressed up for their parts, genuinely lived the roles they were playing and debated views and differences of opinions regardless of their personal political allegiances.

Included in Ebba Holgersson’s surviving papers is the pedagogical mantra from Fogelstad, namely that there should be a “connection between the work of hands, brains, and hearts, and between home-life and that of the community, and between the individual and the communal”. She emphasised this approach and believed that both democracy and associations should entail shared responsibilities amongst members, as all forms of energy were needed. The desire and will to be impartial, tolerant and just were important guiding points as can be seen in the Kulturföreningen Fogelstad publication of Ebba Holgersson’s thoughts on Medborgarskap och demokrati i teori och praktik. Ebba Holgersson’s view of society was open to all varieties of perspectives – political, religious, and social – as long as they emphasised the goal of sharing work equally between the sexes.

In 1947, when Ebba Holgersson was 63 years old, she was awarded the royal gold medal, presented to her by Governor Lindeberg in recognition of “her lengthy and successful efforts on behalf of the municipality and society”. In 1987 Radio Blekinge aired a series of six programmes about her: “Ebba Holgersson – Blekinge suffragette”.

Ebba Holgersson died in December 1966, aged 81. Although she was buried at Karlskrona her grave was removed in 2017 when her right of burial there expired. 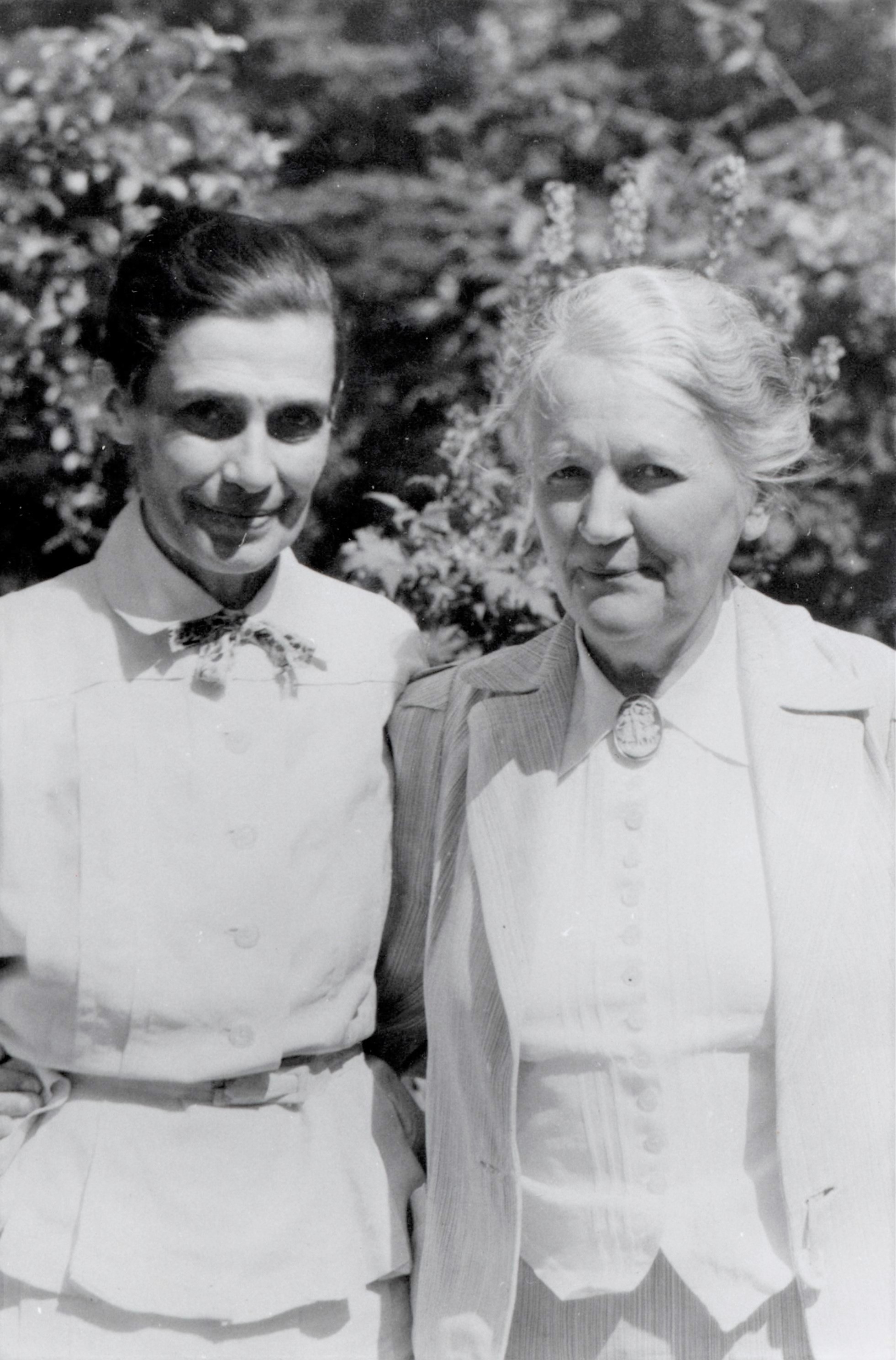