Christina Rinaldo was one of Sweden’s leading experts in hand weaving. The University of Borås and the weaving school Väfskolan gained international recognition due to her unique reproductions of historical textile artefacts, including the clothes of the Ancient Egyptian pharaoh Tutankhamun.

Christina Rinaldo was born in Helsinki in 1944 as the Second World War was raging. Her mother, Dolly Eriksson, was a textile art instructor and her father, Erik Artur Eriksson, was an upholsterer. When she was only two years old, she and her family were thrown out of Finland because her father was a Swedish soldier who was serving in the Finnish-Swedish defence forces. The family ended up in Stockholm. Due to her father’s war injuries it was left up to her mother to provide for the family.

It became clear from early on that Christina Rinaldo would end up working with textiles. From 1959 onwards she took various forms of textile and art classes, which she alternated with practical applications of her skills. She attended Verkstadsskolan för klänningssömerskor in Malmö in 1962-1963, during which she was also employed as a pattern-cutter for children’s clothing at Linde Ateljén. From 1963-1964 she worked with the fashionable hat-maker Lennart Gerok. She then learned to hand weave through a course given by the handicrafts association Malmö läns hemslöjdsförening (now Hemslöjden Malmöhus). This led to her first job as a textile instructor in Skanör and Falsterbo. She then studied art at Målarskolan Forum in Malmö from 1966 to 1968. This inspired her to apply to Konstfackskolan (now Konstfack) in Stockholm. Her first application was not accepted, and she instead attended classes at Birkagården. She was eventually accepted as a student at Konstfack in 1969. There she also met Claes Rinaldo, whom she married. The couple adopted a daughter named Maria, who had been born in 1965. Eventually the family moved to Gothenburg where Christina Rinaldo attended Konstindustriskolan (now HDK-Valand) from 1971 to 1972. She first came into contact with Textilinstitutet i Borås (now the Swedish School of Textiles) thanks to a course organised by HDK-Valand. During the period of 1972-1975 Christina Rinaldo was employed as a hand weaving tutor at the workers’ educational association ABF in Gothenburg.

In 1976 the position of head teacher of hand weaving opened up for applications at Väfskolan (then part of Textilinstitutet i Borås). Christina Rinaldo applied and was awarded the position, not fully aware of what the job entailed. Prior to her, Väfskolan had only had two directors during the 1900s: Hilma Stenwall (1898-1946) and Ulla Cyrus Zetterström (1946-1976). Christina Rinaldo would come to stay on as head teacher for the ensuing 32 years.

Christina Rinaldo was an active teacher who left her mark on the curriculum offered at Väfskolan. She not only ensured that existing traditions were safeguarded but also saw to it that important figures and financiers were invited to be involved in the enterprise. Christina Rinaldo worked closely with the Textile Museum of Sweden in Borås, using their collections as source material for studies, which led to pupil and student exhibitions primarily during the 1980s and the 1990s.

However, everything did not go smoothly. In 1985 Textilinstitutet i Borås closed down. Some of the courses were repurposed as college courses and transferred to the Univesity of Borås. The hand weaving courses were transferred out of the county council’s control and into that of the municipal upper secondary school. Christina Rinaldo was hugely disappointed by this change. She worked to repurpose the course away from an after-school activity to an academic qualification. She combined research development with teaching, which proved to be a successful tactic. The first project Christina Rinaldo tackled with her students was a Bronze Age textile. In 1985, she contacted Margareta Nockert at the Swedish History Museum in Stockholm, and created reproductions of textiles from the Viking settlement Birka.

Christina Rinaldo carried on fighting for hand weaving classes to be included within the academic courses offered at colleges. She telephoned politicians, cultivating their interest and support. Eventually, a two-year hand weaving course became available at colleges. Following a motion in the Riksdag in January 1991, several politicians from the region of Sjuhäradsbygden petitioned, with the support of the University of Borås, for hand weaving classes to be taught at college. In June that same year, the Riksdag voted to meet their demands.

The subject of hand weaving gained wider exposure through its involvement in reproducing ancient textiles, such as the Birka textiles. These were followed by a reproduction of Gerumsmanteln, a pre-Roman Iron Age garment and the oldest remaining textile found in Sweden. Then followed reproductions of Tutankhamun’s clothes. These textile reproductions generated a trademark, bringing the Swedish School of Textiles and the University of Borås into global renown. Academically, the project was connected to textile archaeology. Christina Rinaldo’s main contribution in developing the hand weaving courses lay in tying together technical developments, material expertise and weaving techniques. When an exhibition was proposed at the Swedish History Museum in 1992, a request emerged for an exact copy of the golden robe worn by Margareta, Queen of Denmark, Norway and Sweden, in the fourteenth century. Väfskolan accepted the task. This was a challenging project, which involved an intricate pattern. Twelve metres of material were produced for the robe, with the same amount later produced anew, for a copy given to Denmark.

Christina Rinaldo’s constant travelling both within Sweden and abroad meant that she formed a wide network of contacts, comprising researchers, museum workers, textile producers, representatives for textile courses, hand weavers, and more. At a conference in 1994 Christina Rinaldo met Gillian Vogelsang-Eastwood, who had studied Tutankhamun’s clothing but who had no knowledge of weaving. In order to properly document the original textiles, Christina Rinaldo accompanied her to Egypt and set out on what became an intensive bout of detective work. What had begun as a student project evolved into a comprehensive exhibition to be held at the Textile Museum of Sweden. Christina Rinaldo reassembled a handful of former weaving students, including her friends Kazuyo Nomura and Eva Nilsson. There were a lot of garments to be woven in a short space of time. The exhibition of Tutankhamun’s apparel opened in November 1999. When it closed, the museum had received a record number of visitors and many other museums wanted to borrow the display. Tutankhamun’s Wardrobe went on a decade-long global tour. During this period an association called Friends of Alexandria in Sweden got in touch. They wanted to present a gift inspired by the exhibition to the new library in Alexandria which was about to be inaugurated. In 2002 Sweden handed over a government gift of a rug which had been hand woven by women from the Sahara desert using the same techniques as during the time of Tutankhamun. Christina Rinaldo and Kazuyo Nomura co-authored a book that documented these women’s weaving efforts. The exhibition arrived in Egypt in 2006 and was held in Alexandria library.

Christina Rinaldo became a lecturer of hand weaving in 2000. She was awarded various merits and stipends over the years. In 1994 she received a medal of merit from the national handicrafts association Svenska Hemslöjdsföreningarnas Riksförbund. The following year she His Majesty The King’s Medal of the eighth degree with a blue ribbon. In 1998 Christina Rinaldo was awarded a prize by the University of Borås in recognition of her talent for teaching and disseminating knowledge.

The time Christina Rinaldo spent in Egypt, analysing and creating reproductions of Tutankhamun’s textiles, led it to become like a second home to her. She was fascinated by the country and its people. She had a house constructed at the Siwa oasis where she would meet up with other hand weavers who still wove according to traditional methods. During her visits there, she gathered a large number of textiles from different parts of Egypt. Twenty of these pieces were donated as a gift to the collection of the Museum of World Culture in Gothenburg in 2018.

Christina Rinaldo died in 2019, aged 74. She is buried in Västra kyrkogården (the Western cemetery) in Gothenburg. 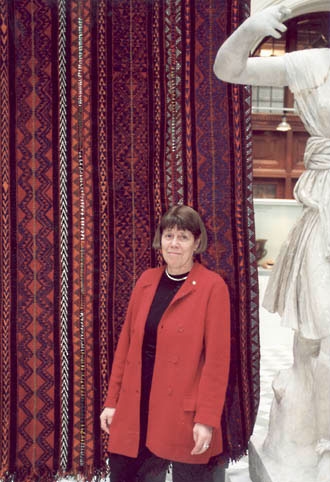