Christina Nilsson was one of world’s greatest female opera singers of all time. The Swedish soprano revitalised the opera genre by combining stunning vocal technique with polished stage performances.

When Christina Nilsson was born at a farm in Sjöabol in Verderslöv parish, near Växjö, she became the seventh addition to a family of six children. Financial difficulties led to the family being evicted when she was five years old. They moved to Sibbagård in Lövhult, Skatelöv parish. One of Christina Nilsson’s brothers was a musician and she would often borrow his fiddle. Her clear and beautiful voice soon became noticed and as soon as she had properly learnt to play the fiddle she began to perform in public. At the age of eleven she was written about in the Stockholm newspaper Fäderneslandet. Three years later the deputy-governor Fredrik Tornérhjelm discovered her at a market in Ljungby and subsequently took charge of her training. Christina Nilsson’s first vocal teacher was Adelaide Valerius-Leuhusen in Halmstad. At the time the Czech composer Bedřich Smetana was living in Gothenburg and he became her piano teacher. Christina Nilsson came to Stockholm aged 16 to continue her training there with Franz Berwald. In 1860 she travelled to Paris, where she first studied singing with Jean Jacques Masset and then spent three years studying with Pierre François Wartel.

On 27 October 1864 Christina Nilsson made her debut at the Théâtre Lyrique in Paris. She played Violetta in Verdi’s La Traviata and was an immediate success. In February 1865 she followed this up with a crystal-clear vocal performance as the Queen of the Night in Mozart’s opera The Magic Flute. That year she also performed as Lady Henrietta in Flotow’s Martha. A Parisian reviewer described the blonde singer from the North as a legend, a Valkyrie. The following year Christina Nilsson played Donna Elvira in Mozart’s opera Don Giovanni for the first time and her reviewers felt that she had revitalised the role through her fresh voice and considerate interpretation. At this point Christina Nilsson had confirmed her place as one of Paris’ most treasured singers. She would return to Paris many a time throughout her career. In 1868 she was the first to portray Ophelia in a production of A. Thomas’ opera Hamlet, and this has subsequently come to be viewed as a milestone in her career. Her last performance in Paris was as Alice in Meyerbeer’s opera Robert le Diable, which premiered on 7 March 1870.

Christina Nilsson’s debut on the London stage took place at Her Majesty’s Theatre on 8 June 1867, where she performed as Violetta in La Traviata. Just as in Paris, Christina Nilsson thrilled everyone with her beautiful voice. She came to perform regularly in England for many years. On 15 June 1867 she performed what became known as a legendary interpretation of Marguerite in Gounod’s opera Faust. According to the reviewers she not only made the role her own but also modernised it. In May 1868 she played the title role in Donizetti’s opera Lucia of Lammermoor at Her Majesty’s Opera in London.This title role suited Christina Nilsson perfectly. She displayed her dramatic talent in the opera's madness scene. In May of the following year she played the same role at the Royal Italian Opera in Covent Garden. On 6 June 1868 the coloratura soprano sang the mezzosoprano role of Cherubino in Mozart’s The Marriage of Figaro, revealing the span of her artistic ability not just vocally but also in dramatic performance. Christina Nilsson played in two new roles during the summer season of 1870 at the Italian Opera at Drury Lane in London – the Duchess in Mozart’s The Marriage of Figaro and Desdemona in Rossini’s opera Othello. The critics hailed her performance, saying that although her portrayal of Ophelia had been sublime she had now surpassed herself in playing Desdemona, and revealed her genius as an actress. The term “tragedienne” was used for the first time in order to describe her performance.

In the autumn of 1870 Christina Nilsson toured the USA and Canada, holding her first concert in September in Steinway Hall, New York. Six years after her debut in Paris it was frequently stated that her formidable success was due to her physical beauty and her crystal clear voice with wide range. Her American opera debut took place in Boston in October 1871, when she once again played Marguerite in Gounod’s Faust. Her reviewers believed that this performance solidified her position as the premier female dramatic singer. From 1871 to 1872 she also performed in opera performances in New York, Pittsburg, Philadelphia and Washington D.C. She portrayed new roles such as Zerlina in Mozart’s Don Giovanni in New York, and Leonora in Verdi’s Il trovatore, also in New York. Christina Nilsson would return to the USA on several occasions. In the autumn of 1873 she also performed at The Academy of Music in New York, where the critics noted her singular genius. On 22 October 1883 Christina Nilsson performed Marguerite in Gounod's opera Faust at the inauguration of the Metropolitan Opera House in New York. She performed in several American cities, as well as in the Canadian cities of Toronto, Ottawa and Montreal. Later that same year she sang before President Arthur at the White House. She ended her American tour in early June 1884.

After her first successful tour of the USA, under manager Maurice Strakosch, Christina Nilsson returned to Great Britain, where she married the French stockbroker Auguste Rouzaud. Their wedding was held at Westminster Abbey in London on 27 June 1872, but it was boycotted by the groom’s family. The marriage lasted until February 1882 when August Rouzaud died in Paris after a period of illness.

The composer Peter Tchaikovsky had heard Christina Nilsson’s rendition of Marguerite in Grounod’s Faust at her debut in Moscow in November 1872. He believed that the Swedish singer had perfectly embodied Goethe’s ideal. Her Russian performances were a triumph and the public were thrilled by her sostenuto technique in combination with an exquisite use of pianissimo. When performing the jewel aria in Faust at the Mariinsky Imperial Italian Opera in St Petersburg in March 1873 she received real jewels from the Tsar and the Tsarina. These jewels can today be seen at the Småland musem in Växjö.

It was not until 1876 that Christina Nilsson made a tour of Scandinavia. On 25 August she performed as Marguerite in Faust at the Kongl. Stora Theater in Stockholm. The reviewers were unanimous in their descriptions of her as a perfect artist who combined dazzling vocal techniques with extraordinary acting. She also performed the roles of Valentine and Mignon in Stockholm. Christina Nilsson also sang in Uppsala, Kristiania (Oslo), Gothenburg, Växjö, Malmö and Copenhagen.

In January 1877 Christina Nilsson made her debut at Hofoper in Vienna performing as Ophelia. Her success was immediate and she was appointed Imperial Austro-Hungarian court and chamber singer. She also performed in Budapest, Hamburg and Brussels before returning to London for yet another season of opera. In the autumn of 1877 she returned to Russia where she was appointed Imperial Russian chamber singer.

Her debut performance in Spain came in 1879 at the Teatro Real in Madrid as Marguerite in Gounod’s Faust. In the summer of 1880 she performed the dual roles of Margherita and Helen of Troy in Boito’s opera Mefistofele for the first time at Her Majesty’s Theatre in London. In the autumn of 1881 she sang at a royal wedding in Stockholm.

She set off on another comprehensive Scandinavian tour in August 1885. After her third concert in Stockholm on 23 September she sang from the balcony of the Grand Hotel. There had never before been such a large public gathering in the Swedish capital and the applause for the singer seemed to last forever. As the public dispersed, however, panic broke out and several people were killed. This tragic event caused Christina Nilsson to decide to end her career. She performed her last few concerts in Scandinavia and Germany – her first ever concert in Berlin was on 9 November 1885 – and she also sang in Prague and Vienna.

In March 1887 Christina Nilsson remarried, to the Spaniard Don Angel(o) Roman-Maria Vallejo y Miranda. The wedding took place in the Madeleine church in Paris. Christina Nilsson marked the passing of her extraordinary career as one of the world’s greatest singers with two farewell concerts at the Royal Albert Hall in London in 1888. The Duchess de Casa Miranda, as Christina Nilsson was now known, had homes in both France and Spain. In 1902 Christina Nilsson was once again widowed. Four years later she bought Villa Vik near Växjö.

In 1894 Christina Nilsson published Om röstens utbildning. Några råd till unga sångerskor. She was also a composer. Two notable compositions are the romantic pieces for voice and piano, with her own texts: Jag hade en vän and Ofelias klagan.

The legendary opera singer Christina Nilsson excelled in the repertoire of musical drama, although she also sang oratorios, romantic songs, popular music and traditional music. She never forgot her simple origins despite her extraordinary success. She retained her interest in folk music throughout her life. She performed folk songs – including Swedish ones – on various stages around the world, albeit in an artistically embellished fashion. Her renditions of the folksong 14 år tror jag visst att jag var became one of her best-known pieces. To mark her 70th birthday Christina Nilsson organised a musicians’ competition in Växjö, which was filmed.

Christina Nilsson died in 1921 in Växjö. Her mausoleum-like grave is at the Tegnér cemetery in that town. 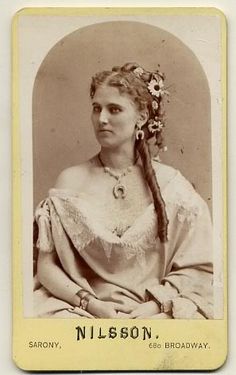