Brita Skottsberg Åhman was the first woman in Sweden to gain a doctorate in political science.

Brita Skottsberg Åhman qualified in political science at Gothenburg college. She gained her Bachelor’s and then Licentiate degrees in 1932 and 1937 respectively, followed by her doctoral degree in 1940. She wrote her thesis on Austrian parliamentarianism, entitled Der österreichische Parlamentarismus, making her the first woman in Sweden to gain her PhD in that field. Her thesis was considered to be one of the best within that subject area. She then became a docent and continued working at Gothenburg college through 1944. It would be another 30 years before the next woman gained her doctorate in political science, namely Gunnel Gustafsson who was awarded her PhD at Umeå university in 1972.

Brita Skottsberg Åhman’s professional life was influenced by her interest in international politics. In 1946 she became the first woman to be appointed head of Utrikespolitiska Institutet (UI, institute of foreign affairs). Her colleague in the political sciences, Herbert Tingsten, was responsible for recruiting her for the post. Brita Skottsberg Åhman left the position two years later. In 1948, the same year of her departure from UI, she married the journalist Sven Åhman.

Brita Skottsberg Åhman spent many years living in the USA with her husband, who was the foreign correspondent for the Dagens Nyheter newspaper, based in New York from 1946 through 1976. For almost 30 years, 1949–1979, Brita Skottsberg Åhman variously worked as a secretary, an expert, and a representative at the United Nations’ (UN) General Assembly in New York. She also worked as a UN correspondent for two years in the early 1950s on behalf of what was then AB Radiotjänst. Brita Skottsberg Åhman’s work for the UN was connected to the Swedish delegation and she primarily worked on issues involving decolonisation in countries which at that time were termed part of the third world. One of Brita Skottsberg Åhman’s publications from 1956 was a book on that topic entitled FN och kolonialproblemen. The former UN ambassador Olof Rydbeck has described her work on decolonisation as particularly significant in that she was present at several negotiations and resolutions which eventually resulted in many former colonies becoming independent nations.

Brita Skottsberg Åhman’s interest in international politics was also reflected in her various cultural activities. She authored several books and academic articles in which she commented on current political problems and she also translated several books into Swedish, including Joseph Goebbels’ diaries and the interrogation of Adolf Eichmann. Cultural pursuits ran in her family: amongst Brita Skottsberg Åhman’s family members was Lydia Skottsberg, her paternal aunt, who was an artist.

Brita Skottsberg Åhman died in Gothenburg in 1993, aged 83. She is buried at the memorial garden at Stampen cemetery. 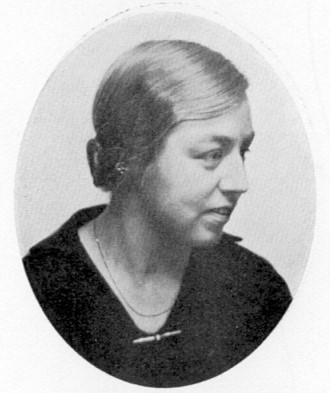