Queen of Sweden and Norway

Blanche of Namur was queen of Sweden and Norway. She was the consort of King Magnus Eriksson.

Most accounts of Blanche of Namur take the form of theories and myths. She is sometimes named among attendants of various meetings and discussions of national importance in a variety of accounts. What has been established is that she and her husband, King Magnus, donated money to Birgitta Birgersdotter towards her future abbey at Vadstena and that Blanche of Namur’s wealth was detailed in her will. Very few records, however, exist regarding the person of Blanche of Namur.

Blanche of Namur’s Scandinavian connection stems from King Magnus’ journey in 1334 to Namur in Flanders to seek permission from Count Jean Dampierre and his wife Marie of Artois to marry Blanche of Namur. She left Namur in 1335 and that same autumn the pair were married, when she was only 15 years old, and she became queen of Sweden and Norway. Her morning gift comprised Tönsberg manor and county in Norway, Lödöse on the Göta river, and the fortress of Lindholm on the Hising river. Her coronation took place in July 1336 in Storkyrkan in Stockholm. She received a second morning gift letter from her husband which stated that she would later receive Bohus fortress and Marstrand along with Älvsyssel outside of Orust. Blanche of Namur and King Magnus had five children together: two sons named Erik and Håkan, and three daughters, two of whom died young and were buried at Ås abbey in Halland. The fate of the third daughter, as well as her name, remains a mystery.

Blanche of Namur is said to have been both beautiful and clever although no portraits have been found which can definitively be said to be her likeness. Her seal, which is known from a certificate completed in 1346, shows a female figure, wearing a floor-length gown without a belt, and holding a sceptre in her right hand and wearing a crown on her head, but there is no proof that this is an actual depiction of the queen.

There is much debate as to how much political influence Blanche of Namur exercised. Some historians claim that she had a relationship with Bengt Algotsson, who was one of the most powerful men in the kingdom, but this is mainly based on poorly supported accusations made by Birgitta Birgersdotter, later St Birgitta. Others have claimed that she poisoned her son Erik Magnusson allegedly following his rebellion against his father. However, neither of these charges have been proven, nor has the claim – heavily exaggerated by Birgitta Birgersdotter – that the king was a homosexual. Birgitta had been close to the royal couple since 1335 when she became Blanche’s “magistra”, a sort of mentor. It is also believed that Birgitta and her husband Ulf had been guests at the royal wedding that same autumn. The royal couple’s trust in Birgitta meant that Vadstena royal farm was bequeathed to Birgitta for use as a future abbey in 1346, and was followed the next year by a large sum of money for the abbey’s construction. However, over time the relationship between Birgitta and the royal couple cooled as Birgitta made accusations against both the king and even against Blanche of Namur, who according to Birgitta was a “viper with a harlots’s tongue, dragon’s bile in her heart and the bitterest poison in her flesh”. Further, Birgitta claimed, “this was why her eggs were poisoned”.

The cause of Blanche of Namur’s death remains a mystery. One rumour was that she was poisoned in 1363 when her son Håkan, then king of Norway, was to be joined in matrimony with Margareta, the eleven-year-old daughter of the Danish king Valdermar Attardag, in Copenhagen. Blanche of Namur and Christofer, Margareta’s brother, both died shortly after the wedding whilst King Magnus was saved through the actions of his doctor. Valdemar’s detractors have claimed that he was keen to be rid of the Swedish royal couple. However, it could just as easily have been some other kind of infectious illness which caused Blanche of Namur’s death.

The myth linking Blanche of Namur to the Swedish children’s rhyme called “Rida, rida ranka”, in which the next line is “hästen heter Blanka” (the horse’s name is Blanche) and which it is claimed she allegedly sang to her young son, can be completely discredited. Instead, it was Zacharias Topelius who, in his 1871 work Läsning för barn, published a variant of the children’s rhyme. He then conjured up a story of Blanche of Namur having sung the song to her son at the royal castle. This interpretation was said to have inspired Albert Edelfelt to create his famous painting Drottning Blanka.

Despite our lack of verifiable knowledge about Queen Blanche of Namur her name has lived on. More than ten high schools in Western Sweden and Scania have been named after her and in Varberg she is memorialised in the form of a small park called Drottning Blankas park (Queen Blanche’s park) and in Drottning Blankas örtagård (Queen Blanche’s herb garden), which is an alternative name for the Fästningsterrassen summer café which provides the finest views in Varberg.

Blanche of Namur died in 1363 and is said to have been buried in Ringsted in Zealand, Denmark, but even this claim remains unverified. 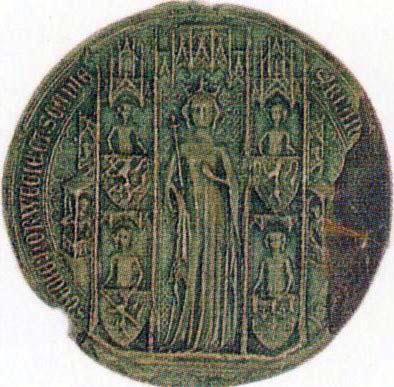