Birgit Rosengren was a popular actress during the first half of the1900s.

Birgit Rosengren was the daughter of the wholesale merchant Hugo Rosengren and his wife Thérèse. She was born in Stockholm in 1912. Birgit Rosengren had two older siblings, her brother Kurt and her sister, later an operetta singer, Margit Rosengren. A stage career lay close at hand, since the family had an artistic streak. Their maternal grandfather, August Hallner, was the restaurateur at the Hamburger Börs, a painter and an author. Their mother had sung at the Svenska teatern and had actually considered continuing at the Opera, but married instead and thus had to shelve that dream. When later Margit Rosengren entered the theatre, it became the little sister’s place to do her homework and sometimes she was allowed to hop in as an extra, even when she was only at primary school, and in that way she was more and more drawn into the magic of the theatre world. When Birgit Rosengren had later completed her studies at Anna Schuldheis’ Flickskola, she studied privately for Gabriel Alw and worked as a telephonist before she applied to and studied at Dramaten’s theatre school in 1931–1933.

Birgit Rosengren performed a larger role early on, in 1933, as Blenda in a production of Hjalmar Bergman’s Hans Nåds testamente, at the Skansen outdoor theatre − with Olof Sandborg in the title role. She was later active at most of the Stockholm theatres, among them Dramaten, Blancheteatern, Komediteatern and Vasateatern. She also participated in theatre tours, with among others Riksteatern, and reading evenings, with which she continued far up into old age. Her speciality was Nils Ferlin.

Birgit Rosengren’s breakthrough came with the role as Linda Brown in Tonvikt på ungdomen at Komediteatern in 1935. Among her stage roles may also be named Viola in Twelfth Night in 1935 at Komediteatern, Fru Larsson in Melodien som kom bort in 1937 at Vasateatern, Elisabeth Dohna in Gösta Berlings saga in 1938 at Riksteatern, Monica Breedlove in Maxwell Anderson’s Ont blod at Alléteatern in 1957 and as the lecturer’s wife Wanda in Gökunge i boet in 1962 (with her husband Elof Ahrle and daughter Carina) on tour and at the ABC-teatern in Stockholm. She also participated in the Kar de Mumma revues in 1934 and 1937, both of which took place at the Blancheteatern.

Birgit Rosengren made her film debut in 1934 in Schamyl Bauman’s folky comedy Flickorna från Gamla sta’n. She became a very popular youth idol during the 1930s, like Ingrid Bergman and Birgit Tengroth, who had their breakthroughs at about the same time.

Birgit Rosengren participated in 15 full-length films during her career. Among these may be mentioned Flickor på fabrik in 1935, Kvartetten som sprängdes in 1936, Skicka hem n:r. 7 in 1937, Kloka gubben in 1938, Efterlyst: En modern Stockholms-historia in 1939, Sextetten Karlsson in 1945 and Moderskapets kval och lycka in 1945. She also performed in a number of TV productions, among them the TV series Här kommer Petter in 1963 and the Swedish Television Christmas Calendar in 1966: En småstad vid seklets början.

Birgit Rosengren was active for many years at Sveriges Radio, with her debut at the age of twelve in 1925 in Sven Jerring’s Barnens brevlåda. After that she had small roles in radio plays and poetry readings. For a number of years, she also worked in the radio archive. Birgit Rosengren recorded three record sides with songs from revues and films. In 1945 she was infected with polio and was compelled to retire from her career. It was about ten years before she was able to return to the stage.

Birgit Rosengren often played well-behaved, rosily sweet and lively girls and women, first in ingenue roles and later as wives and mothers. She was in herself warm, cheerful, easy-going and humorous, and this radiated out from stage and screen and certainly contributed to her popularity.

Birgit Rosengren died in Bromma in 2011. She is buried in the Northern Cemetery in Solna in the same grave as her first husband. 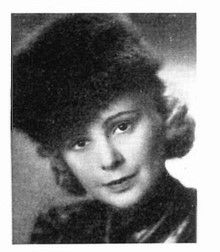