Berta Hansson was an artist. She is considered to be one of the most prominent expressionists of the 1900s who is best known for her depictions of children.

Berta Hansson grew up in Hammerdal in Jämtland, where her father Daniel Hansson owned a homestead. He was also a churchwarden and home life entailed a warm religious atmosphere. Berta Hansson’s mother, Brita Hansson, suffered from tuberculosis from the time her daughter was born and when Berta Hansson was 16 years old. The family grieved and mourned extensively – it was Brita Hansson who had spotted and encouraged Berta Hansson’s talent for drawing and painting. Following the death of the eldest daughter expectations that the remaining daughters would become housewives increased. However, Berta Hansson had other plans. She wanted to leave the village and explore the world. When her father finally allowed her to attend Sigtuna highschool a new and fascinating world opened up for her. She took lessons in art, literature, and human biology. Having completed her schooling Berta Hansson decided to become a drawing instructor. Her father, in contrast, believed that the school-teacher profession was a more reliable choice. Thus, having completed four years at the teacher-training programme in Umeå Berta Hansson gained her teaching qualifications in 1934.

The next year Berta Hansson began a teaching post in the village of Fredrika in Västerbotten. It was not long before she began to draw and paint children. Berta Hansson remained in Fredrika for 10 years, apart from a few terms’ absences. She spent an inspiring period at Otte Sköld’s painting school in Stockholm in 1940. Back in Fredrika her paintings became discovered a few years later by the artist and author Elsa Björkman-Goldschmidt. This led to her first solo exhibition at Färg och form in Stockholm in 1943. Her reviewers were awed by the originality and sensitivity this hitherto unknown artist displayed. Some, however, believed that her paintings of children were ugly and that she was caricaturing them. She responded to her critics thus: “That which many find shocking in children is what I find is their most characteristic and charming aspect.”

During the 1950s and 1960s Berta Hansson lived in the Stockholm suburb of Gröndal. One of her closest friends was the author Walter Ljungquist. They both shared a the definitive goal of reaching into their inner sources, both in life and in their art. Another of Berta Hansson’s close friends was the author Sara Lidman, who was also a neighbour. Their friendship strengthened Berta Hansson’s interest in literature. Throughout her life Berta Hansson expressed herself in writing by keeping diaries, writing letters and authoring books. The Hansson-Lidman exchanges on various art forms continued even after they had both moved away from Gröndal. Berta Hansson spent the last 20 years of her life at the Konstnärshem house at Horngatspuckeln in Stockholm.

During the early 1950s Berta Hansson spent a little over a year in South Africa where she was very distressed by the South African race laws. In order to become acquainted with the black population she made her way to the missionary stations in the countryside. She was very taken by the culture and lives of the black population and used to spend her days drawing – at schools, hospitals, and other places were people congregated. “I have seen their faces. I will not forget”, she wrote in her diary. Upon her return to Sweden she turned her experience into graphic imagery and textile artwork, often expressing political themes. She wanted to convey something of the Africa she had seen, complete with contradictions: “Black – white, happy-go-lucky – tragic, good – evil”. She also donated her artwork to the Swedish anti-apartheid movement and started a fund-raiser to help South African women earn their own income. One of the outcomes of this project was that a young Swedish artist couple – Peter and Ulla Gowenius – travelled to South Africa in the 1960s and set up a weaving workshop and art-school for black people called The Rorke’s Drift Art and Craft Centre. The art created there has been disseminated across the globe and also led to the establishment of the Afroart trust.

Children formed a recurring theme of Berta Hansson’s art. She was driven by her strong engagement in improving children’s situations and their vulnerability. Having depicted pensive children from Lappmark and serious children from Africa in her art she came up with a new expression: excited children, children ignorant of violence and evil, silently absorbed children, and children engaged in intense movement. Her 1981 book entitled Barn contains about 70 images of children depicted in charcoal and clay. Berta Hansson had initially felt sadness when was younger about not having children of her own. Later on she came to feel that she had had so many children through the many she had drawn. She was also close to her nieces and nephews.

During the 1950s, 1960s and 1970s Berta Hansson was in close contact with a group of elderly female artists. These included Vera Nilsson and Siri Derkert – both of whom were expressionists and important role models. Berta Hansson was particularly grateful to the sculptor Ninnan Santesson who inspired Berta Hansson to begin working in clay. Clay came to provide a certain comfort and salvation to Berta Hansson in the future – when it was “dark in the world” or when other techniques got the better of her. She often produced small sculptures of children.

The texts and images contained in Berta Hansson’s 1984 book Kamratporträtt includes raw and loving depictions of her friendships with fellow painters. What they all had in common was that they lived alone. Berta Hansson was very protective of her ‘alone’ time. During the latter part of her life she had a long relationship with a man, but she was unwilling to cohabit with him. She believed that a woman must have time to herself in order to be able to work. Berta Hansson felt a close spiritual affinity to the German artist Paula Modersohn-Becker who, like herself, had survived a brave inner and outer struggle to be able to realise her dreams of being an artist. Berta Hansson was captivated by both her life and her work. She wrote an essay on Modersohn-Becker in which she stated: “Women today, just like before, are pulled between being loyal to life itself – childbirth and caring – and their desire for artistic creation. It seems to be a permanent dilemma”.

Berta Hansson created her own and very personal interpretations of Biblical themes, inspired by the Biblical imagery of her childhood. Her form of expression was differed exceedingly from traditional religious art. It soon became apparent that her simply-drawn figures, people, and animals, with their hints of expressionism and naïvism were hard for adults to accept. Some of her religious imagery has been deemed grotesque, with undo emphasis on suffering, whilst those which were lighter and more lovingly expressed were deemed not beautiful enough. Berta Hansson felt it was important to steer clear of templates and the usual designs. She imagined that children, with their fresh and strong sense of empathy, would be able to see her images. This was also true for her biblical imagery, expressed in textile applications and bright colours. Berta Hansson’s own favourite biblical theme was her large application entitled Livets träd, which depicted stories from both the Old and New Testaments. These can be seen in Hammerdal church, to which the artist herself donated the work.

Berta Hansson’s vision began to degenerate in the 1980s and she then began to create her biblical images as small water-colours. She used a magnifying glass to create them. She made many hundreds of her so-called survival pictures. She expressed the themes of human suffering and wordly evil using in works such as Nattvarden and Korsfästelsen. Others, such as Skapelsen, reflected hope and comfort. A selection of these images can be seen in the 1988 book Att se och betrakta, with texts by the bishop couple in Stockholm, Brita och Krister Stendahl. Berta Hansson herself was not religious in the usual church meaning of that term. She believed that her religion resided in her artwork.

Berta Hansson would spend her summers in her childhood area of Hammerdal. A favoured theme was the elderly. She particularly wanted to depict those worn by time, and who had lived through hard times. By focusing on the hands of the elderly she could reveal something of the conditions they had survived, and she found hands as interesting and expressive as faces. She also, in the company of the author Carl-Göran Ekerwald, travelled through Jämtland during which she produced reports. She published books based on these travels, portraying the people and their environments both visually and verbally.

Berta Hansson’s sight continued to decline during the last years of her life, and yet she gained a new world of images: birds. These were “Not ornithologically specific birds – just the mental images of birds”. As she could no longer distinguish between colours she worked in black and white. Her large oil painting called Sista Fågeln, from 1991, was Berta Hansson’s closing comment on her artistic output.

Berta Hansson died in Stockholm in 1994. 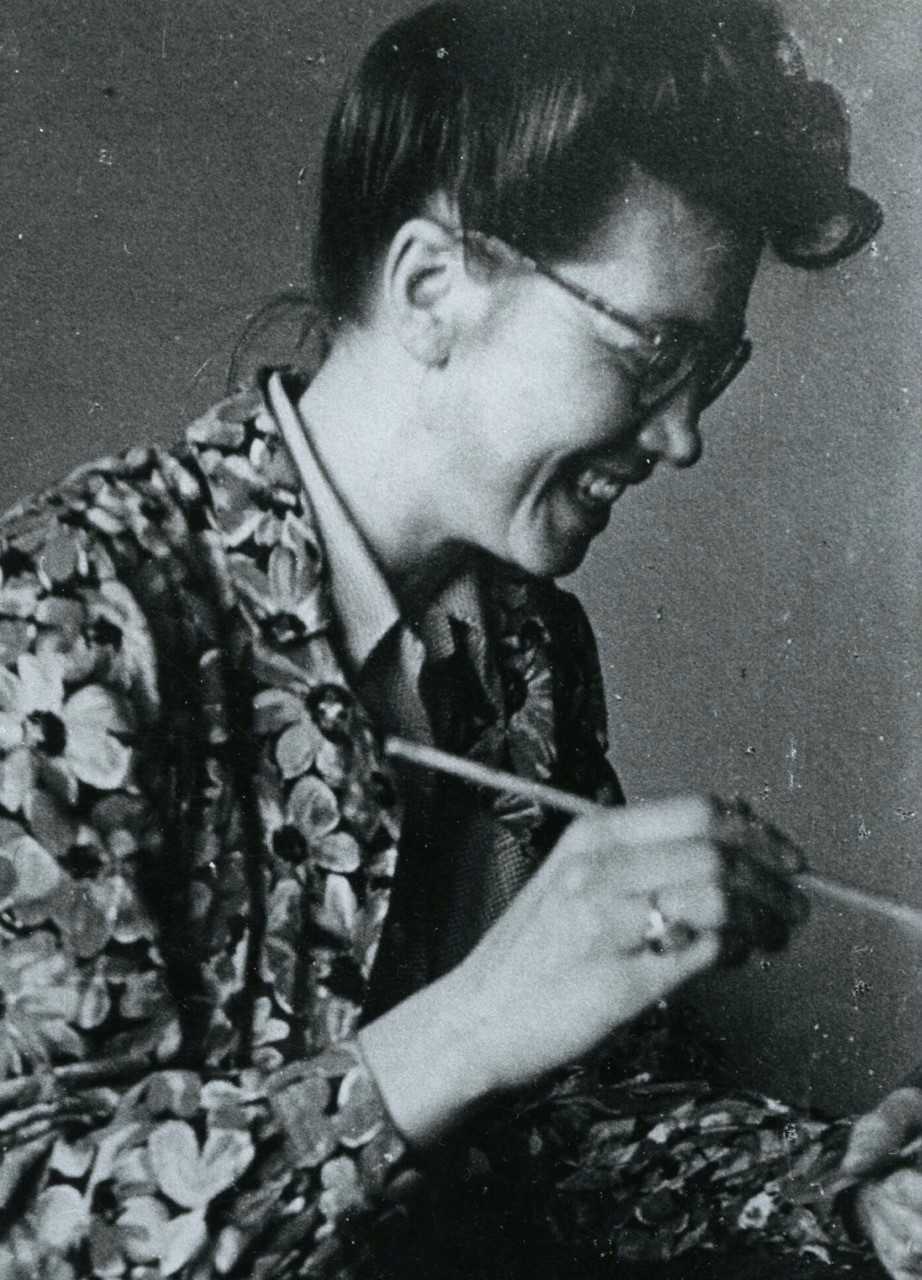