Aurora Lovisa Ljungstedt was one of the first Swedish authors of crime and horror stories.

Aurora Ljungsted was born in Karlskrona in 1821. She was the firstborn to Major Georg Leonard Hjort and Fredrika Elisabeth Älf. In 1835 the family moved from Blekinge to the mother’s ancestral property, Krusenhof estate in Östergötland near Kolmården. In 1846 Aurora Ljungstedt married Samuel Viktor Ljungstedt who was a sectional head of Fångvårdsstyrelsen. They then moved to Stockholm. Once married Aurora Ljungstedt began to publish novels and stories in newspapers and journals such as Aftonbladet, Dagligt Allehanda, and Svea. Despite enjoying a 40-year long career, which lasted from the late 1840s until the mid-1880s, Aurora Ljungstedt lived the life of a reclusive author, unconnected to any literary circle until her death in 1908.

Aurora Ljungstedt wrote serial stories under various pseudonyms. Initially she used the pseudonym Richard, but she became best known for her work done under the name Claude Gérard. She had taken the name from a character in a novel by a popular French author called Eugène Sues. Due to her determination to keep her identity anonymous her husband handled all dealings with publishers and newspaper editors in secret. It was not until the mid-1870s that her real name was mistakenly made public.

Aurora Ljungstedt was probably one of the most read Swedish authors of her time. She published her stories in several of the most circulated newspapers and journals of her day. In 1853 her Gothic novel Hin Ondes hus was published in Albert Bonnier’s journal Europeiska följetongen. Her collection of stories called Dagdriverier och drömmerier, 1857, was published in Aftonbladet. Some of her best work, En jägares historier, 1860, Psykologiska gåtor, 1868, Onkel Benjamins album, 1872, and Jernringen, 1873, were published in Dagligt Allehanda. Albert Bonnier’s publishing house released the majority of her output between the years of 1872 and 1882 in a nine-volume set called Samlade berättelser. Some of her stories were also translated into Danish, Finnish and French.

Most of Aurora Ljungstedt’s stories can be described as Gothic crime stories. Hin Ondes hus can be termed Sweden’s first horror novel, containing obvious references to the Gothic novels by English author Ann Radcliffe, whilst “Harolds skugga” in En jägares historier is a story about a doppelganger which foreshadows Robert Louis Stevenson’s later novel Dr Jekyll and Mr Hyde, published in 1886. Mysterious lives and borderline cases are investigated in several of her stories. She makes refined use of the themes of identity and sex change in Moderna typer, 1872. The main topic of Psykologiska gåtor, 1868, is the border between life and death, which appears to be transcended by one of the characters. Secret murders and thefts also play an important role in that book as well as in Inom natt och år, 1878, in which the sharp detective Alf Stjerne solves the crime. Onkel Benjamins album comprises a number of crime stories from judge Benjamin Ross’s time in court, of which “Hastfordska vapnet” is one of the first whodunnit mysteries in Swedish literature.

Aurora Ljungstedt’s work has been likened to an older tradition of the melodramatic serial novel, along with foreign authors such a Eugène Sues and Edvard Bulwer Lytton. However, her output also contains strikingly modern elements. The nature descriptions and the portrayal of the Östgötland landscape around Kolmården are both multi-faceted and believably realistic. Despite the appearance of supernatural features Aurora Ljungstedt’s mysteries normally have a natural and rational explanation. Aurora Ljungstedt’s view of criminality was markedly progressive given the time she lived in. Her stories clearly portray the connection between misery and crime. Her criminals do not suffer from genetic disorders but are products of societal injustice and social privations. Thus, her crime stories bear a clear social and political message, which presages later preventative measures and reforms within the penal system.

Aurora Ljungstedt died in Stockholm in 1908. 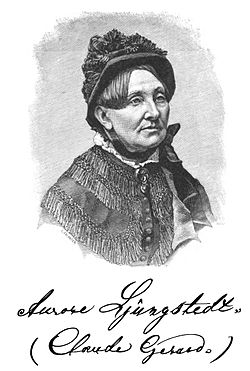