Astrid Cleve was a botanist who was also one the earliest women in Sweden to be awarded a doctorate.

Astrid Cleve was the eldest of three sisters. Her father, Per Teodor Cleve, was a prominent professor. Her mother Alma Cleve was also an educated woman who had gained her school-leaving certificate from the Nya Elementar school in Stockholm. Her parents had ended up living in Uppsala the year before Astrid Cleve was born following Per T. Cleve’s appointment as professor of general and agricultural chemistry at the university in 1874.

As their father’s employment included accommodation at Carolinaparken the three Cleve sisters grew up in an academic environment. The family home was located right in between the two departments of chemistry and physics. The sisters were initially home-schooled by their mother. The fact that both of her parents placed great value on their daughters’ education when this was not the norm naturally had a positive impact on Astrid Cleve’s and her sisters’ future possibilities and later ambitions in life. Further, it should be noted that Per T. Cleve was one of the official supporters of Ellen Fries’ promotion. At the ceremony he made the point that women’s positions within society reflected a civilisation’s development. No reason existed to differentiate between men and women in terms of intellectual acuity. Alma Cleve also shared this view and argued on its behalf in a pamphlet entitled En protest, published in 1896, which contradicted Ellen Key’s motherhood rhetoric. Alma Cleve believed that there were no biological differences between the minds and intellectual abilities of boys and girls.

Astrid Cleve completed her natural-sciences focused schooling very rapidly and she gained her school-leaving certificate in the spring of 1891 as a private student aged only 16. In the autumn she matriculated at Uppsala university and became one of only 21 female students out of a total student body numbering almost 1 700 at the institution. Astrid Cleve had a voracious appetite for learning and gained her Bachelor’s degree in January 1894 receiving top marks in both botany and chemistry. Further, she also excelled at the Romance languages course, earning just below top marks. The Uppsala kvinnliga studentförening (UKSF) (Uppsala female students’ society) was established during the early spring of 1892 and Astrid Cleve was one of its first members. She was eventually appointed ‘klubbmästare’ (head of club) for the society which entailed being responsible for society entertainment and, given that she was an outdoors-type – and was particularly keen on skiing which was becoming a popular pastime throughout the country – she was also responsible for setting up a sporting club within the UKSF.

Astrid Cleve’s primary subject was botany and she continued botanical research after graduating. Her thesis, entitled Studier öfver några svenska växters groningstid och förstärkningsstadium completed in 1898, has been described as somewhat innovative as it was “one of the first studies to place more emphasis on plant physiology and biochemistry in what in Sweden tended to be morphologically- and systematically-based botany”, in the words of the agricultural chemist Sven Odén. Her secondary subject, chemistry, appears to have contributed to the approach taken in the thesis. Her father, a professor of chemistry, was a good mentor and academic role model. She adopted one of his major research lines, namely diatoms or single-celled algae. She had already published two pieces in this subject several years before completing her thesis.

Astrid Cleve first met the man she went on to marry, Hans von Euler-Chelpin, around the turn of the 1900s, presumably in conjunction with attending Helge Bäckström’s lectures on crystallography and the physical chemistry of crystals at Stockholms högskola (college). At this time it was not unusual for fellow members of staff to attend each other’s lectures. Astrid Cleve was then working as an assistant at the college and Hans von Euler-Chelpin had been recruited to the college a few years earlier by Svante Arrhenius. The two got married in 1902 and thus the scientific collaboration which they had already initiated greatly intensified in the ensuing years. The couple co-authored nineteen academic articles. From 1903-1908 their family expanded to include four children. However, following seven years of marriage Hans von Euler-Chelpin sought a divorce. Before this came into effect the couple had yet another child together. In 1912 the divorce was finalised and the following year Hans von Euler-Chelpin got married to Beth (Elisabeth) af Ugglas.

Following the divorce Astrid Cleve retained sole custody of the children and was thus solely responsible for providing for them. She then took a teaching job at Anna Sandström’s advanced teacher-training programme. She also completed a probationary year of teaching which then allowed her to teach at Norra real and the Ahlströmska school in Stockholm for most of the 1910s. Nevertheless, she was able to put her academic qualifications to use in 1917 when she successfully competed for the post of director of the Uddeholm AB science laboratory which was then under construction. She and the four youngest of her five children then moved to Skoghall, Hammarö in Värmland. In her new post she produced several academic articles. Her findings as published in the articles did not lead to practical applications, however, and thus did not bring financial benefit to the company she worked for. As a result Astrid Cleve was encouraged to be prepared for redundancy. Instead she simply resigned from her post in 1923 and moved to her childhood home of Uppsala in January 1924. Her mother Alma Cleve – widowed since 1905 – was still resident there.

In Uppsala Astrid Cleve provided for herself and the three children who were still living at home by writing popular science articles and by becoming actively involved in Allmänna valmansförbundets centrala kvinnoråd (the central women’s council of the General Electoral League). During the election year of 1928 she gave 85 public talks in twelve different counties. She also became increasingly interested in quaternary geology, a field she had been introduced to much earlier by her father and which she now, in her later years, threw herself into quite frenetically. Astrid Cleve’s theories on oscillation, namely the frequencies used to explain sedimentation and sea-level changes following the shrinking of inland glaciers, put her in direct opposition to the entire Swedish geological establishment – albeit her expertise in diatoms led her to be practically invited to join this domain. Unable to gain the acceptance of Swedish geologists Astrid Cleve threw herself into convincing the nation’s archaeologists but they proved no more receptive to her ideas.

In 1929 Astrid Cleve moved to Bergslagen where she began to farm. All of her children had now gained their school-leaving certificates and were self-reliant. Although she never sought another scientific post she never ceased her research. Before 1925 when the so-called ‘behörighetslagen’ (permission act) was enacted there were very few opportunities available for female academics. Astrid Cleve had only been able to undertake research as a result of being married – as without her husband’s social and cultural capital this would have been out of bounds. However, this also meant that her husband largely dictated the conditions for their collaborative work. This vexed Astrid Cleve when her husband was awarded the Nobel prize in chemistry in 1929 (along with the British biochemist Arthur Harden) as part of his work was dependent on her earlier efforts.

Astrid Cleve’s life as a farmer must be seen in the light of her political affiliation: she identified herself as “outright nationalist”, or as she explained in a letter to her fellow student Klara Johanson “according to vulgar speech, a ‘nazi’”. She continued to express her scepticism of democracy and described Hitler in congratulatory terms even after the outbreak of the Second World War. Many years after the war had ended she still held a political view which had by then been abandoned by most. She remained convinced about her views on Scandinavian sea-level changes into her golden years. Late on in her life, in 1949, she converted to the Catholic faith and her new-found interest in the Bible led her to interpret it from a scientific angle.

Despite opposition and a life that was at times nomadic, along with her fruitless attempts at joining the academic establishment, Astrid Cleve’s huge interest in and expertise in diatoms meant that she never stopped researching. In the 1950s she published a five-volume flora entitled Die Diatomeen von Schweden und Finnland. This work was closely reviewed by four botanist and a geologist. There was demand for her work and many scientists commended her efforts. Following efforts made by her son-in-law Sven Stolpe she was awarded an honorary professor’s title: ‘professor honoris causa’.

Astrid Cleve died in 1968. She is buried at the old Uppsala cemetery. 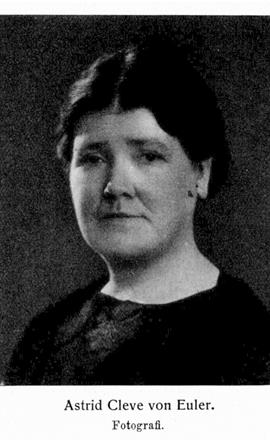