Anna Söderblom was an author and a polemicist. She was among the first generation of female students to attend Uppsala university.

Anna Söderblom was born in Stockholm on 24 September 1870. She was the second child in a family of three siblings, and her parents were sea captain Carl-August Forsell and Axeline Åberg. The family lived in Stockholm, where Anna Söderblom attended Mamsell Nilsson’s primary school at Riddargatan from 1876–1880, followed by six years at the Åhlin school. After another four years’ schooling at the Wallin school she gained her school-leaving certificate in 1890. That same year she enrolled at Uppsala university to continue her academic career. At that time there were only about 20 female students amongst that university’s student body. Before she got married in 1894 she spent a short time working as a teacher at Halmstads kommunala flickskola (municipal girls’ school) and at the Wallin school in Stockholm.

Anna Söderblom was one of the female pioneers amongst the student body at Uppsala university. Her fellow female students included Lydia Wahlström, one of the leading figures of the women’s movement, who was also an active polemicist and writer on church matters. Anna Söderblom and Lydia Wahlström, who had been at school together, helped to set up Uppsala Kvinnliga studentförening (Uppsala female students’ society), which became a sowing ground for women who fought for women’s rights. The society members were given training in public speaking, in how to run a chaired club, how to encourage bravery and boldness, how to engage in politics, how to work in public agencies and how to win positions, especially those which appeared out of reach. Despite all this, Anna Söderblom actively campaigned against women’s suffrage and championed the concept of the woman’s place being in the home. At the same time, she did not hesitate to assume a position within male-dominated public discourse.

In 1894 Anna Söderblom married Nathan Söderblom, who later became archbishop, a professor, and a recipient of the Nobel prize. This marriage came to define the direction her life would take. She devoted her life to being a wife, the mother of 12 children, and the hostess of a home that was permanently open to mutual friends, her husband’s students, members of the congregation, and professorial colleagues. One of her tasks also included a formal representational role. However, she was no ordinary wife and mother. Throughout her life she was a strong, independent woman of integrity and specific views.

Her clearly intellectual qualities meant that Anna Söderblom had no difficulty in shouldering the weight of the role she inherited through Nathan Söderblom’s office. She self-assuredly and unreservedly created a public profile for herself by sharing her ideas of how to engender a positive society and she gained a reputation as a great speaker, particularly on the radio. At a conference on world peace and the global mission she talked about her visits to North and South America. On another occasion she told an audience of hundreds about missionary songs. As the archbishop’s wife she focused her public activities on a range of philanthropic and social projects, whilst also holding meetings for the wives and widows of the clergy. She placed a lot of energy on her role as chair of Svenska kvinnors missionsförening (Swedish women’s missionary society) from 1916–1927. She was also an instigator of, and for many years active in, Stiftelsen Andreas Ands Minne (foundation in memory of Andreas And), which was a home in Uppsala for the elderly who required care. During the Nazi period she served as a member of the board of Hebreiska Universitetets Vänner (friends of the Hebrew University).

Anna Söderblom commanded a razor sharp intellect and was extremely talented. She took a realistic view of her era whilst also operating within a sort of nineteenth-century mindset in terms of her behaviour, perhaps best represented by the hard-to-define anachronism of ‘an old softie’. She was

well-read and extremely stylish, was particularly fired up when being outspoken, emotional, or sorrowful. Her written pieces are characterised by perceptive observations, an inventive sense of style, and heavy pathos. She published a series of essays and polemical articles. Already as a student – in 1883 – she wrote about the Japanese missionary and educational pioneer “Neesima: En lifsbild från det moderna Japan”. This was followed up by “Den kvinnliga rösträtten och kvinnorna” in 1912, “Gemensamma måltidstimmar” in 1917, “Kvinnan och samhället” in 1920, “Svensk allmoge i Amerika” in 1930, and “Ett kvinnokall” in 1931. She also published two books, one entitled En amerikabok in 1925, and the other På livets trottoir in 1948. Anna Söderblom died in 1955. The second part of På livets trottoir was published posthumously in 1956.

Anna Söderblom’s life became anything but anonymous through her marriage to Nathan Söderblom and it is without doubt her husband’s successes and prominence amongst the elite and notable people of his day that provided Anna Söderblom with an exciting lifestyle. They lived in a variety of European places whilst also having the Archbishop’s residence in Uppsala. Anna Söderblom was able to accompany her husband on his travels, socialise with royalty, leading figures, scientists, nobility, the intellectual and artistic crème de la crème. All the while Nathan Söderblom was establishing and consolidating his career which culminated in the 1925 Ecumenical meeting in Stockholm, following which he was awarded the Nobel prize in 1930. He died the next year. He left his then 61 year-old widow Anna Söderblom behind and their children – some of whom were still teenagers. Anna Söderblom spent her final 24 years cataloguing, organising, and sorting the vast amount of papers and correspondence material – comprising 60,000 letters – which her husband had left behind. From July 1931 her life centred around this as well as other ways of keeping the memory of her husband’s life and work alive whilst also promoting the ecumenical revival as far as she was able. She wholeheartedly adopted the cause of the Jewish people and it was in relation to that that she in August 1936 embarked on what she called a pilgrimage via Germany to Switzerland, during which she participated in conferences and made contributions in the fight against anti-semitism.

Anna Söderblom struggled all her life with issues of faith and doubt. She felt alienated by the church and its compact antiquated traditions, by the religious community’s inherited rites and ancient ways of expression, as well as pietism’s phraseology. However, she had great command of theology and often quoted hymns, the bible and statements by religious academics and historical leading figures. On what would have been her golden anniversary, 29 April 1944, she sat alone at her late husband’s desk and wrote: “Nathan’s and my love is the only great reality of life”. Her anchor was love, not religion.

In 1923 Helge Söderblom, the eldest son of the Söderblom children, was asked by the Idun weekly to lightheartedly summarise his mother’s successes under the headline Den bästa av alla mammor which he concluded thus: “She has written books, and translated others, given talks and lectures on politics, about women, about men, given wonderful and moving speeches, travelled across Europe, served as chair in all sorts of likely and unlikely committees, fundraised during the war, arranged children’s accommodation during the war, set up street-kitchens, organised sock-knitting on behalf of the national guard, and taken charge of innumerable ladies and elderly women with and without complaints, and so on ad infinitum. She has read everything, can do anything, can quote whichever poet you name, and can converse in any language you choose. You mothers, just try to best my mother – if you can!”

Anna Söderblom died in 1955. She lies beside her husband under a funerary slab in the choir of Uppsala cathedral. 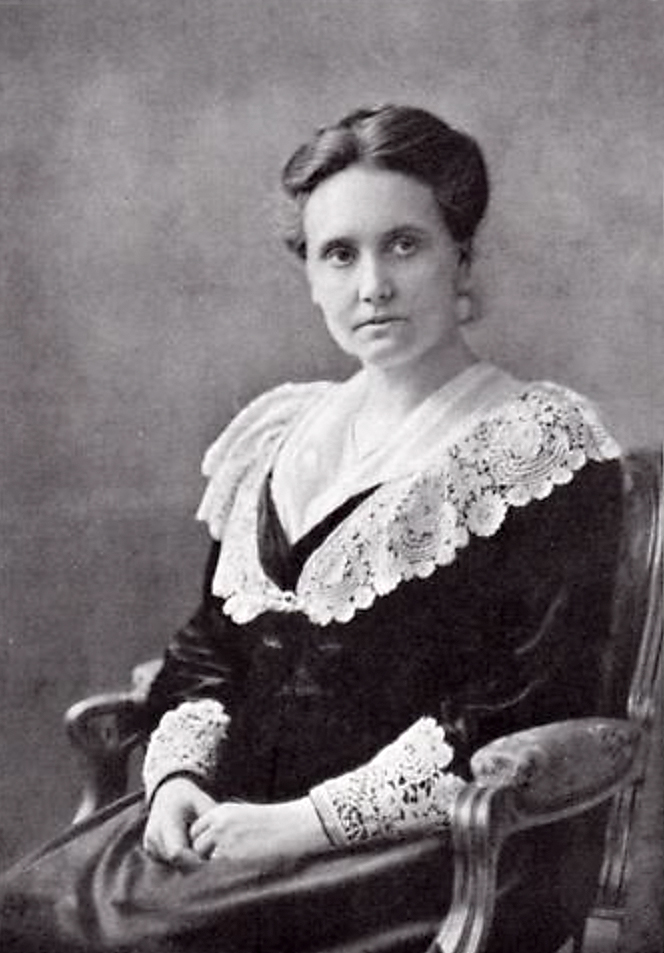