Anna Palm de Rosa was an artist who was famous in her day for her postcard paintings. Her work came to be largely forgotten for a long time but today examples of it can achieve relatively high sums at auctions.

Anna Palm de Rosa was born Anna Sofia Palm in Stockholm in 1859. Her father, Gustaf Wilhelm Palm, was a professor and a well-known landscape artist. Her mother Eva Palm, née Sandberg, was the daughter of the painter Johan Gustaf Sandberg. The family home was frequented by well-known artists of the day, including Viktor Andén, Gustaf Cederström, Nils Kreuger, and Georg Pauli. Carl Larsson and Julius Kronberg both took lessons from Anna Palm de Rosa’s father.

Anna Palm de Rosa initially was given private painting lessons by her father and a certain influence of her father’s work can be seen in her landscapes. According to the conventions of the era it was impossible for her to attend art college. She carried on studying with other painters, including Edvard Perséus, the historical and landscape artist. He was a friend of the family and ran a successful private art school. Anna Palm de Rosa then studied with Per Daniel Holm, accompanying him when he spent time with the so-called Skagenmålarna (Skagen painters) in Denmark. It was during this period that she created one of her best known paintings which depicted a game of “l’hombre” being played at Brøndum hotel in 1885. Some influences from Skagenmåleriet can be discerned in Anna Palm de Rosa’s artwork by the manner in which she painted light shimmering across the landscape.

Anna Palm de Rosa continued her art studies in Antwerp under Romain Steppe, the landscape and marine art painter. After spending time in Paris she went to Copenhagen, where she worked as a teacher from 1889 to 1891 at Det Kongelige Danske Kunstakademi despite having criticised that very institution for its old-fashioned methodology. This was the period when she began to paint water colours which became very popular. Many of these portray motifs from Stockholm. They were sought after as tourist souvenirs and she was pushed into mass production as her work had become somewhat fashionable.

In 1895 Anna Palm de Rosa emigrated, never to return to Sweden. She settled first in Paris, accompanied by Karin Nilsdotter, a loyal Palm family servant. Anna Palm de Rosa gained new artistic inspiration during this stay in the French capital in the form of folk life from fishing villages. Having spent a few years in Paris she then moved to Italy where, on a visit to Capri, she met the man she later married, Alfredo de Rosa, a lieutenant in the infantry. They married in 1901. A few years later their son Francesco was born. He later worked as a doctor for the poor. The couple lived in various locations and eventually settled in Madonna dell’Arco near Naples. When Anna Palm de Rosa’s husband was called up for service in 1915 the burden of earning enough money to provide for the family fell to her, leading to an intense period of creativity.

Anna Palm de Rosa maintained contact with her native country through Axel Eliasson who acted as her promoter by publishing her postcards. Her first commission from Eliasson was to produce eleven water colours to be used as cards for the official exhibition in 1897 which Eliasson was responsible for sourcing. The originals were created in the same format as the completed postcards, revealing Anna Palm de Rosa’s attention to detail. Of all the postcards produced in connection with the exhibition hers sold in the highest numbers. Indeed, it was a major success for the whole phenomenon altogether.

From then on her output of postcards primarily consisted of a few categories: the first and main of these was topography. A whole range of cards consisted of various views of Stockholm. Other types included Swedish places and what has become known as genre postcards, that is, those displaying folk life in places like Dalarna and Lappland. Other categories included motifs inspired by other countries, such as Finland and Hamburg in Germany which formed part of the popular types known as “Gruss aus” (greetings from) postcards, as well as some displaying themes from Palestine. One particular series numbering about 50 exemplars was of young military men and various soldiers. Anna Palm de Rosa’s output was extensive, amounting to several hundred works according to an inventory produced by Göran Heijtz. When taken as a whole her work reveals her incredible feeling for detail and colour.

In one way her output in terms of postcards can be compared to other contemporary female artists’ work. Lars Johannesson has noted in his study that there are similarities between Anna Palm de Rosa’s work and that of Jenny Nyström and Karin Larsson. All three of these women were prominent artists who for various reasons did not get as much opportunity to display their talents due to their husbands and the marriages within which they were trapped. 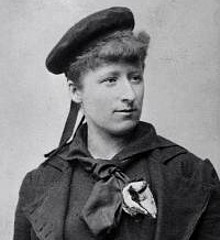