Anna Hofmann-Uddgren was one of the best-known and most significant cultural celebrities in Stockholm around the turn of the twentieth century. Her contemporaries described her as “a hub within Stockholm’s entertainment life”.

Anna Hofmann-Uddgren was born into Stockholm’s Hedvig Eleonora congregation in 1868. She was baptised Anna Maria Victoria Hammarström. Hofmann was a stage-name which she adopted later and which gave the false impression that she had noble ancestry. According to the births and baptismal records she was an illegitimate child and the space for her father’s name was left blank. Apparently both she and her mother were crystal clear as to her father’s identity. Her unfinished autobiography reveals Anna Hofmann-Uddgren belief that she was of royal lineage and that her father was none other than the king himself, namely Oscar II.

Her mother, Emma, who came from a simple farming background, had moved from Gotland to Stockholm when she was 17 years old. She apparently met the Crown Prince Oscar, as he was then, in unspecified circumstances and the pair entered into a relationship and she fell pregnant. Financial support seemingly arrived intermittently from the king-to-be, albeit the amount varied in relation to his fluctuating interest in both Emma and their daughter. This left the pair living in economically precarious circumstances. They were never in dire poverty, however, and for a time Emma ran a tobacco shop in Gothenburg. Nevertheless, growing up as an illegitimate child entailed a certain social stigma and Anna Hofmann-Uddgren herself claimed that she was often the butt of jokes made by her contemporaries.

The good times in Paris did not last long, however. Anna Hofmann-Uddgren made the mistake of writing home and describing her early successes. This news reached the ears of King Oscar II who was not in the least bit pleased about her choice of career and thus withdrew his financial support. It was around this time that Augusta Öhrström left Paris, having found new employment in New York. Anna Hofmann-Uddegren then began to perform with an opera company, which included touring through Italy, in order to cover her accommodation fees. She met a French nobleman from the Ducrest family during this period and he eventually became the father of her child. His interest in Anna Hofmann-Uddgren cooled as soon as she fell pregnant. This brought her time in Paris to a definitive close and she returned to Stockholm. There she gave birth to her daughter Viola on 19 July 1891.

Following a comprehensive tour of Scandinavia, which started in Norway, Anna Hofmann-Uddgren made her breakthrough performance in Sweden in 1893 at Kristallsalongen in Djurgården, Stockholm, also known as the home of the variety-show. By that time she had exchanged her Hammarström surname for Hofmann. Anna Hofmann-Uddgren quickly became one of the most popular singers of the era and one of the highest-paid artists in Stockholm. Performing in variety shows could sometimes be challenging but Anna Hofmann-Uddgren built up a professional identity which the audiences loved by narrowly keeping to the right side of the limits of respectability. Anna Hofmann-Uddgren tended to avoid speaking about her background when she gave interviews, possibly as part of a conscious strategy in creating her public persona.

Variety shows were enjoying their peak of success in 1893 when the Swedish daily press began to write seriously about Anna Hofmann-Uddgren. The majority of variety-show salons in Stockholm were run by men. The combination of varied entertainment with the serving of strong alcohol was a recipe for commercial success. The variety-show salons in Stockholm became major enterprises which, particularly during the warmer months of the year, were open seven days a week and accommodated between 500 and 1,000 visitors. This positive trend ended in 1896 when the Swedish parliament, following a comprehensive debate on the influence of variety shows on social morals, decided that strong alcohol would no longer be allowed to be served at the shows. The change in the law meant that a significant portion of the profit disappeared as did the male entrepreneurs. From that point onwards variety shows became dominated by female managers, the majority of whom were young, unmarried, and had themselves been variety-show artists, just like Anna Hofmann-Uddgren – who became the most influential of them all.

Kristallsalongen appears to have had a special place in her heart. It was where she had made her breakthrough performance and where she had come to know variety-show director Anshelm Berg, who later left her his whole enterprise. This role of variety-show director offered her new possibilities and Anna Hofmann-Uddgren came to run several of Stockholm’s biggest variety show establishments. In the meantime she also remained a celebrated artist.

Anna Hofmann-Uddgren’s business acumen and entrepreneurial abilities were put to the test when Sveasalen and Sveateatern were completely destroyed by fire on 5 March 1899. A huge part of her investment went up in smoke. Anna Hofmann-Uddgren did not give up, however, and already by the autumn of the same year she had returned with open-air variety shows in Kungsträdgården. She had a well-developed sense for contemporary trends and a willingness to experiment with various entertainment concepts. She had initially faced financial problems after taking over the running of Kristallsalongen. Anna Hofmann-Uddgren and Anshelm Berg then decided to produce revue shows which were the height of fashion in Europe. Their greatest success occurred in 1900 with the revue called Den förgyllda lergöken by Emil Norlander. During the early seasons Anna Hofmann-Uddgren not only directed but also performed, appearing as one of the lead characters, Fia Jansson. Several of the songs in the production, such as “Känner du Fia Jansson?” remained popular for a long time. According to Norlander the production was so successful that Anna Hofmann-Uddgren’s tax bill rose from 10,000 kronor to 15,000 kronor.

It was during the 1897 Stockholm Exhibition that the wider public in the capital city was first exposed to the media of film. Anna Hofmann-Uddgren was quick to exploit the new technology and that very year filmed elements were introduced into Sveateatern’s variety-show programme. From then onwards film formed a recurring element in the tableaux productions right up to the fire of 1899 when everything – including the film projectors – were consumed by flames. The link between variety show entertainment and film is well-documented. Early films borrowed much of the art of mime and stage acting from variety shows. Many early screen actors had originally been variety-show performers whilst the variety-show salons came to serve as the place where the medium of film gained wider international exposure.

Anna Hofmann-Uddgren’s activities also followed suit, both in front of and behind the camera. In 1911 she made her debut as the first Swedish female director when her film Stockholmsfrestelser was released. Gösta Ekman the elder appeared as one of the characters in the film. Later Anna Hofmann-Uddgren gained permission from August Strindberg to be the first director to produce The Father, released in 1912. Anna Hofmann-Uddgren married the journalist Carl Gustaf Uddgren in the early 1900s and they had four daughters and one son together. Her first daughter, Viola, came to live with the family. Anna Hofmann-Uddgren made her films together with her husband but despite being the driving force behind these productions her name was noticeably absent from advertising and reviews. Anna Hofmann-Uddgren produced a total of six films, of which The Sisters by Elin Wägner, from 1912, became the most well-received by film-reviewers.

Following her appearance in the film 1921 The Pilgrimage to Kevlaar Anna Hofmann-Uddgren disappeared from the spotlight. At that point she was 53 years old and was able to look back upon her successful and influential career within the Swedish entertainment industry. Raising a family appears to have served as a clear dividing line in her professional activity. As her family expanded her role as artist and entrepreneur accordingly shrank. It is likely that this was in response to the social expectations placed on bourgeois married women.

Anna Hofmann-Uddgren died, aged 79, in Bromma in 1947. She is buried at The Woodland Cemetery in Stockholm. 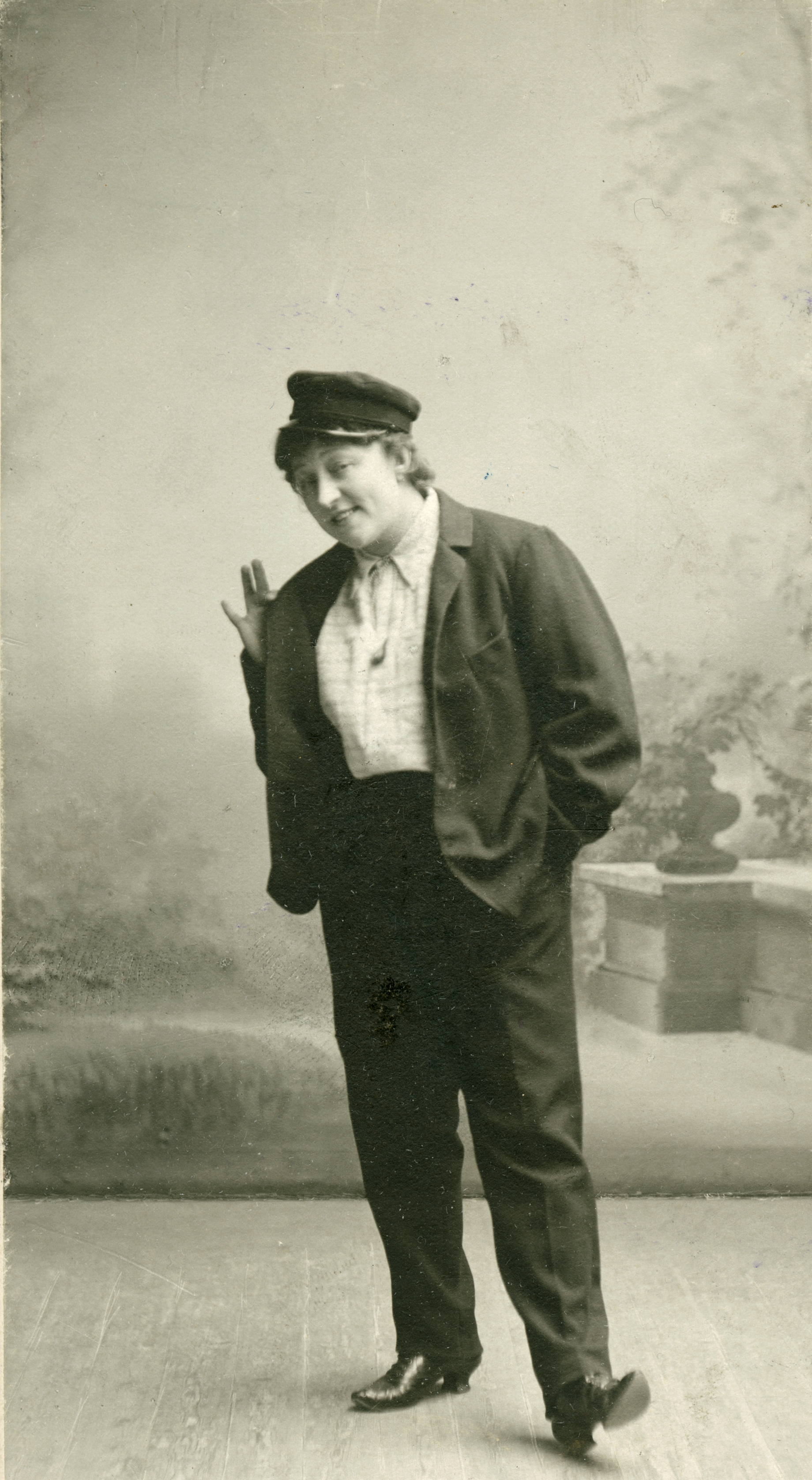