Marie Cederschiöld was a pioneer of Christian social welfare work in Sweden. She was the first director of Diakonissanstalten (Christian welfare institute) in Stockholm, now known as Ersta Diakoni.

Marie Cederschiöld was the second child and first daughter born to the clerical couple Caspar and Helena Cederschiöld. Initially the family lived in Växjö, where the children had access to education. In 1830 Marie Cederschiöld’s father began his post as vicar of Forsheda congregration, which lay just outside of Värnamo. There he home-schooled his children along with some other young children. One of them was Gustaf Blomén, also the son of a clergyman, and the then 17-year-old Marie Cederschiöld fell in love with him. They became engaged and planned a future together. Tragically, Gustaf committed suicide in September 1839. Marie Cederschiöld wrote in her diary that afterwards she decided “to never get married”.

Towards the late 1830s Marie Cederschiöld began to spend a lot of time at the large Herrestad estate near Forshaga where Emelie Petersen, better known as “Mormor på Herrested” (the Herrestad granny), lived and worked. Emelie Petersen was a pioneer of Christian social welfare in Sweden, which included opening a “rescue school” at Herrestad in 1844 where up to 30 girls and boys were taken into a good home where they were both educated and prepared for confirmation. When Marie Cederschiöld’s father died in 1845 she moved in at Herrestad and helped Emelie Petersen in her work, including teaching. She was a notably capable leader albeit Emelie Petersen felt she was not practical enough in her approach.

After some years Marie Cedershiöld moved to own accommodation in Lund and opened a girls’ hostel – a work that brought both joy and worries. In her diary for 1848-1850 Marie Cederschiöld herself noted in reference to working at the girls’ hostel: “I cannot demand too much … I must have patience and wait!” Raising and educating 12 girls took a lot out of her.

In 1849 Marie Cederschiöld was headhunted to serve as director of the newly planned Diakonissanstalt in Stockholm. Following a long period of consideration she accepted the offer. She was forced to dismantle her girls’ boarding school in Lund by Christmas 1849. In the spring of 1850 she travelled to Kaiserswerth in northern Germany in order to gain inspiration from the Christian social welfare institute there with a view to setting up a similar institute in Stockholm. The idea of seeking advice and help from Germany had percolated from some of the interested members in Stockholm who had received an annual report from the Strasbourg institute, which they read with great enthusiasm. It contained good work models to provide exactly what was desired in Stockholm – to facilitate the training of Christian women within healthcare professions.

At the Christian social welfare institute in Kaiserswerth Marie Cederschiöld attended classes and gained practical knowledge and experience within the spheres of healthcare, childcare, and elderly care. She was faced with many situations she found difficult to accept. For most of 1850 she was only given placements in healthcare sections and never within educational sections, which was where her actual interest lay. Just before Christmas 1850 Karoline and Theodor Fliedner, the leaders at Kaiserswerth, agreed that Marie Cederschiöld could extend her period with them and promised that she would get ample time for teacher training and practise. Marie Cederschiöld accepted this suggestion. She further was promised the opportunity to undertake a study trip to visit other Christian social welfare institutes.

On 1 April 1851 Marie Cederschiöld left Kaiserswerth. Once she had returned to Stockholm she immediately set herself to the tasks she had been allocated. She moved into the building at Pilgatan 8 which the Diakonissanstalt executive committee had rented on the promise of an anonymous person that the monthly rent would be covered for the next two years. This person was Jenny Lind, who later became Marie Cederschiöld’s friend. Two hospital rooms to accommodate eight to twelve people were set up at Pilgatan 8. All furnishings and necessary items were donated by the Diakonissarbetsförening which had been established in parallel with the Diakonissanstalt, as well as by other interested parties.

The Diakonissanstalt was opened on 9 July 1851 under very simple circumstances. The intention behind the institute was for it to serve both as a training programme for nurses and for it to offer healthcare. The chief physician was Magnus Huss, a doctor from the Serafim hospital, whilst doctor Adolf Fredrik Melander served as the hospital doctor. This allowed trainee nurses to gain additional practical experience at a larger hospital than their usual one. The nurses’ training included lessons with the doctors, practical tasks undertaken during daily rounds, as well as Marie Cederschiöld’s teaching in all subjects “related to the future calling”.

The first trainee sisters began in April 1852 when two of the students were deemed mature enough to become part of what was known as “Moderhusets syster-gemenskap” (the sisterhood of the mother house). Only one of the two, Charlotte Ljungberg, was later advanced to the position of deaconess, along with another trainee sister Ebba Zetterström. They were then the first trained medical nurses and ordained deaconesses in Sweden, and in the North as a whole. The ordination occurred at Blasieholm church in a formal ceremony. Charlotte Ljungberg and Ebba Zetterström immediately became Marie Cederschiöld’s first fully-trained colleagues. They worked not only in the hospital, but also in home nursing, in the kitchen, at the front door, in the garden and even in crèches in several Stockholm congregations. Both women were present when Diakonissanstalten moved from Kungsholmen to Ersta in Södermalm.

Marie Cederschiöld was aware of the destitution and poverty among many Kungsholm families and, without seeking the permission of the Diakonissanstalten board, she decided to open a school for the children admitted to hospital along with some healthy but poor children from the surrounding area. She was so harshly criticised for doing this that she considered resigning from her post. She was, however, supported by her friend from Lund Betty Ehrenborg-Posse, who came to help her by teaching at the school and by training some of the students to become teachers. Thus the Diakonissanstalt “småskola” (first two years of school) teacher training programme began. This programme only lasted a few years. Marie Cederschiöld almost simultaneously opened a children’s home for some of the most deprived children of Kungsholmen. This was the first step of the children’s home activities, which would be run by the Diakonissanstalt for almost 100 years.

Marie Cederschiöld also wanted the Diakonissanstalt to visit and support the female prisoners locked up in Stockholm’s prisons. She had met Elisabeth Fry, an Englishwoman who had dedicated her life to improving the lives of female prisoners in England, in Kaiserswerth and this had inspired Marie Cederschiöld to take on a similar cause in Stockholm. She began her prison work in 1851 with the help of Mathilda Foy, a philanthropist she had met a few years earlier at Herrestad. They had obtained permission from the liberal-minded director-general of the prison service, Georg Gabriel von Troil, to “impart Christian knowledge to the prisoners in the hospital” at 3 o’clock on Saturday afternoons. However, the current prison priest forced von Troil to retract his permission. Both King Oscar I and Queen Josefina became involved in the dispute, but the visits to the prison were forcibly stopped. In the autumn of 1854 Fredrika Bremer, Mathilda Foy, Betty Ehrenborg-Posse, and Marie Cederschiöld obtained royal permission to hold regular meetings in the prisons for “education and edification”. This never came under the remit of the Diakonissanstalt, but rather fell under the remit of the Fruntimmers-sälskap för fångars förbättring (“ladies’ association for the improvement of prisoners”).

During her active years (1851-1862), Marie Cedershiöld made important contributions to Swedish women’s history and to the Church’s participation in the development of the Swedish welfare state with its demands for “medical service, social welfare and school”, which stand to this day.

Marie Cederschiöld’s sisters valued her leadership and her time commitment, which for her was strenuous and often hard work. Her energy soon ran dry and she had to take some salutary breaks. In 1962 she felt ready to withdraw from Diakonissanstalt. She had at that point participated in the education of 35 women, who she had followed all the way to their ordination.

Marie Cederschiöld died in 1892 on a temporary visit to Lund. She was buried on 10 January in Växjö cathedral. A memorial stone can be seen in Tegnér cemetery. 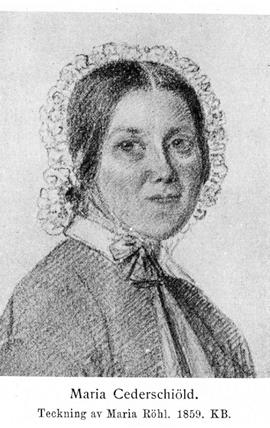